We All Want 'Change' 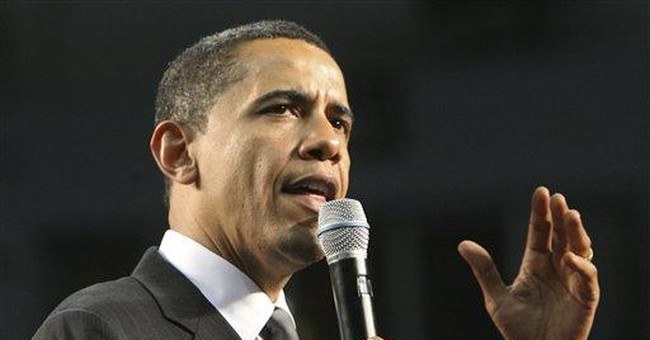 The deep thinkers have now done their work, and are back with the result: What American voters want, in this year of our Lord 2008, is "change."

Now, why didn't you and I think of that? Every politician worthy of the name knows that "change" is the one dependably desirable thing in the political universe. It demands the eradication of everything in the status quo that is undesirable, and its replacement with something better. (A moment's thought would suggest that change might also result in the eradication of aspects of the status quo that are desirable, but somehow that never occurs to us.)

So politicians are perfectly safe in demanding "change," and they are forever doing it. As far as possible, they demand it without specifying exactly which changes they are for. That, they prefer to leave to you. What annoys you? Your noisy neighbors? Your spouse? Your unduly demanding boss? The crooks in City Hall? The greedy corporations? The rapacious unions? The Red Chinese? An adept politician can manage to suggest that he shares all of these exasperations with you, and may even be able to ameliorate one or two of them.

The trouble, of course, is that change always entails consequences -- and not only the consequences we intended, but usually others that we never anticipated. This result is so common that it has a natural law named after it: the Law of Unintended Consequences. So, if fortunate, we learn early in life to be on the lookout for these disagreeable little surprises, and to avoid them where we can.

But this year, we are told, the voters are particularly hungry for change, and the politicians are eager to provide it. Very well, then -- what changes shall we provide? Higher taxes, to provide revenues for the benefit of the nation? There is very little demand for that. Lower taxes, then, to allow us to keep more of what we earn? Only at the price of services -- police protection, fire control, medical care -- that we cannot sensibly forego. It soon becomes clear that every society is a carefully constructed combination of contributions to a common goal. We can tinker with the contributions at the edges, but there are sharp limits to what we can force people to contribute, and perhaps even sharper ones to the goals we can persuade them to forego.

So the undifferentiated demand for "change," as a political slogan, is simply a fraud -- and a dangerous fraud at that. It asks the voter to identify what annoys him most, and then to assume that eradicating that is what the politician has in mind.

Back in 1946, the national Republican Party, emerging from 14 years of the New Deal, ran on the national slogan, "Had enough? Vote Republican!" It was an inspired example of the sort of the technique described above. Whatever the voter had "had enough" of -- whatever was annoying him -- could be attacked and countered (the slogan suggested) by voting Republican. And the evidence is that it worked, because the voters promptly sent to Washington the first Republican Congress in 16 years.

Of course, calls for change can just as easily be desirable as pernicious -- as the Republicans in 1946 undoubtedly thought theirs was. But it will behoove us to consider carefully what sort of change is being asked for. "Change" is not, simply and everywhere, desirable. In political affairs particularly, a given change can be desirable in certain respects but thoroughly undesirable in others.

Let us beware, therefore, the political analyst who tells us, to all appearances approvingly, that what the public wants this year is "change." Maybe so; or perhaps different sections of the public want directly contradictory kinds of change. There is more here than meets the eye.