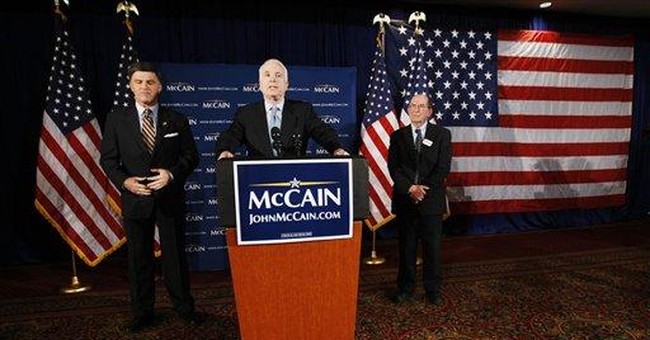 Let me begin by acknowledging that I was one of the many who thought that Mitt Romney, rather than John McCain, would be the Republican presidential nominee in 2008. Six months ago, the McCain candidacy was in very bad shape indeed. It was nearly out of money, and, according to the polls, McCain wasn't impressing the voters. The conservatives had failed to come up with a sure-fire winner from their own ranks, but Romney looked to be the best of the remaining alternatives. Handsome, polished, a formidable businessman and a former governor of Massachusetts, he was able to establish his conservative credentials on many issues, and was genially willing to modify them on others.

The other contenders for the nomination, aside from McCain, all had notable shortcomings. Rudy Giuliani had surprised me for many months by his stubborn survival as a viable candidate. But New York City mayors are not the stuff from which Republican presidential candidates are normally fashioned, and it continued to seem likely that Giuliani's appeal to conservative Republicans, which was based on his reputation as a fighter, would diminish when they began learning about his views on abortion, his record on illegal immigration, his multiple marriages, etc. And so it proved.

Mike Huckabee has undeniable charm, and did his best to demonstrate the conservative credentials that would be essential in a nominee. But his record as governor of Arkansas had been spotty in that regard, and he also suffered from his identification as a regional, rather than a national, figure. He remains technically in the race to this day, but the arithmetic of the contest has turned fatally against him; it is all but impossible to see how he can amass a winning margin.

That left Fred Thompson as the conservatives' last, and perhaps best, opportunity. He was indisputably conservative, personally attractive and had discharged his duties adequately during his term in the Senate. He and his advisers apparently calculated that the shortage of conservative contenders for the nomination would create a powerful thirst, which he could quench by announcing his own availability around Labor Day. But somehow the plan just didn't work. Perhaps Thompson's delay in getting into the race led voters to suppose he didn't take his own candidacy seriously enough. If so, they decided to agree.

And then McCain began to move. Or, more precisely, his figures began to move -- upward. What accounted for this development? McCain didn't fundamentally alter the case he was making for his nomination. He insisted -- rightly -- that his record was in most respects a conservative one, and that the exceptions were testimony to his straightforwardness. The only really unique aspect of that record was that he had been an unwavering supporter of the Iraq War from the very start, and had even favored a "surge" before Bush ordered one.

That was by no means a disadvantage among Republican primary voters, especially as events in Iraq took a more favorable turn, and it fitted well with McCain's overall image as a military hero (and a decorated one, at that). It seems, therefore, that on a second look a great many Republicans began to find real substance in the record and personality of John McCain. There was just more "there" there. Romney and the others were no doubt fine men, but McCain stood out as a leader and a fighter.

So gradually the winds shifted; the McCain candidacy gained momentum, and now seems virtually certain to prevail and give him the nomination. His age (he would be 72 on taking office) may bother some people, but Ronald Reagan pretty well blew that concern out of the water.

He will be a formidable adversary for the Democrats. As I have warned before, 2008 has all the earmarks of being a Democratic year. The Republicans have held most of the major offices of government for eight years, and lots of people will think it's simply the Democrats' "turn." But Hillary, instead of McCain? Obama, instead of McCain? It makes one wonder.