William Marshall
|
Posted: Mar 04, 2019 10:35 AM
Share   Tweet
The opinions expressed by columnists are their own and do not necessarily represent the views of Townhall.com. 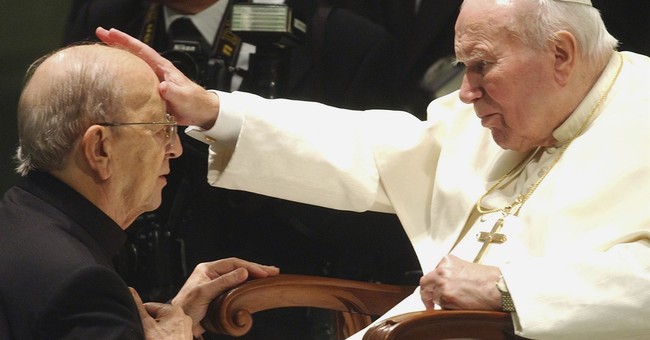 Our world seems to be flying apart at an accelerating rate these days, like some sort of rapidly descending airplane in an uncontrolled spiral, ripped apart by centrifugal forces. Its social fabric is being rent in ways that would shock our grandparents.  Democratic governors, Democratic state legislators and a large proportion of the Democratic Party, for example, now assent to the murder of living, born-alive infants and those about to be born. Such abominations come from a place so dark in the human soul that one wonders how we got here, and how so quickly. Many of us yearn for a world leader of tremendous moral strength, courage and conviction to step forward to condemn it in the most forceful of terms. We once had two such leaders who entered the world stage with seemingly providential simultaneity. Their names were Ronald Reagan and Pope John Paul II.

I had the opportunity to attend a private screening last week of a wonderful new documentary on the sidelines of this year’s Conservative Political Action Conference, called The Divine Plan. The screening of this superb, virtually made-for-CPAC film should have taken place at CPAC itself, but instead was relegated to an off-site location, across the street from the main CPAC events at the Gaylord National Harbor hotel.  I understand that the cost of securing a spot within CPAC for it were prohibitive.

This is a shame. It would have received a tremendously positive reception from CPAC’s audience, especially among the huge proportion of CPAC attendees who are young, post-Reagan Era conservatives. They would have benefited from the invaluable history and spirit of true conservatism offered by the movie’s exposition of Ronald Reagan and Pope John Paul II’s collaboration in bringing down the Soviet Union.  CPAC management should have recognized the film’s power and the financial limitations of the backers for such a niche, independent production.

The Divine Plan was written and directed by fellow New Yorker, and seeker of spiritual truth, Robert Orlando. It drew from several books examining Ronald Reagan and Pope John Paul II. One of those was A Pope and a President, by best-selling author and professor at Grove City College, Paul Kengor, who served as both a technical consultant to the film and one of the many experts who appear in it.

The film is only 80 minutes in length, and starts out by taking us through an economical, and efficient, biographical treatment of both Reagan and Karol Józef Wojtyla, who would later go on to become Pope John Paul II.   There are striking similarities in the men’s youthful experiences and interests, despite their pursuing widely divergent careers. They both suffered from traumatic childhood events and privations. Wojtyla lost his mother to heart failure when he was 8years old. Reagan’s father was an alcoholic, unreliable provider, both physically and emotionally. They both were forced to become self-reliant at an early age. They were both superb athletes, of good humor, and very popular among their peers. They both pursued acting and, importantly for the monumental roles they would eventually assume, understood the power of imagery, symbolism and the spoken word. Most vitally, perhaps, they both had a deeply ingrained loathing and crystal-clear understanding of the dehumanizing nature of communism.

The rise of these two extraordinary figures was coupled with the ascendance of other principal actors who would play a pivotal role in this greatest of all plays. They included the conservative stalwart and great anti-communist British prime minister, Margaret Thatcher, the intrepid Polish Solidarity labor union leader and freedom-fighter, Lech Walesa, and the brave, if hapless, President of the Soviet Union, Mikhail Gorbachev.   Gorbachev, to his credit, did not play to historical Soviet type when faced with the death throes of his country by lashing out in some massive purge or by invading a neighboring country. Although he did his best to stave off the inevitable, he eventually came to acknowledge the failures of his nation’s tyrannical system and opened it up to reform and freedom.

Especially poignant is the film’s treatment of the near simultaneous assassination attempts on both Reagan and Pope John Paul II. Reagan was almost felled by a bullet from a deranged young man, John Hinckley, Jr., bent on impressing a Hollywood starlet. John Paul II was shot multiple times by a man who was almost surely, based on CIA-derived intelligence discovered in Professor Kengor’s research, a hired assassin of the Soviet Union, named Mehmet Ali Agca.  The Soviet Union, at the time under the control of President Yuri Andropov, a bloodless KGB-trained killer if there ever was one, was desperate to stop John Paul II, whom they recognized as a force that could bring down their oppressive and decrepit system.

The “divine” aspect of the rise and collaboration of Reagan and Pope John Paul II appears in the film on many levels, but the survival of both men following their shootings is perhaps the most moving. Both men had lost at least half, or more, of their blood volume, and the survival of either defies medical explanation. Moreover, their shootings cemented the men’s relationship, which blossomed in the wake of this shared experience. It was as Reagan was recovering from his injuries that he became determined to end Soviet oppression and to ally himself with John Paul II in this effort. He would meet with the pope on several occasions, correspond with him frequently, and share US intelligence on the Soviet Union and the freedom movement in Poland. Reagan recognized Poland as the linchpin to collapsing the entire Soviet bloc. His secret coordination with the Pope and his covert funding of Poland’s freedom movement were central to creating the fissure leading to the demise of the USSR.

Numerous experts were assembled to provide fascinating commentary in interview excerpts during the course of the movie, including those who played instrumental roles in Reagan’s collaboration with the Pope. These included Richard Allen, former Reagan National Security Advisor, and James Rosebush, Deputy Assistant to President Reagan, who was present at the historic meetings between President Reagan, Pope John Paul II, and Mother Theresa. Mr. Rosebush, author of True Reagan: What Made Ronald Reagan Great and Why It Matters,  was also present at the screening and I had the pleasure of discussing both his time in the White House and the current crises our country is facing. What an opportunity to meet such a witness to and shaper of history.

At a time when the current head of the Roman Catholic Church stands mostly silent in the face of Americans embracing infanticide (please see my earlier commentary on this subject), and demonstrates an embarrassing fecklessness, we desperately need men like Pope John Paul II and Ronald Reagan with clear moral vision and strength of character. When Pope Francis famously responded to a reporter’s question regarding homosexual priests by asking, “Who am I to judge?”, he demonstrated a shocking abdication of his role as a moral leader in the world. He is elected precisely to judge, based on a prayerful consideration of presumably deeply held convictions and understanding of millennial-old Roman Catholic tenets.

The Divine Plan is a reminder of the type of leadership our country sorely needs. Conservatism needs more such films, and CPAC would help itself by giving low-cost space to screen them. Mr. Orlando’s last project, Silence Patton, which focused on General George S. Patton and was distributed by Sony Pictures, topped the best seller charts with Amazon Prime, proving there is a market for these films. Another production in the works by Mr. Orlando will examine George Washington.

History has shown that wobbly moral knees do not for strong institutions make. Men like George Washington, Abraham Lincoln, Winston Churchill, Ronald Reagan, and John Paul II are history’s rare blessings to humanity. Let’s hope history provides more such blessings to lead us before our civilization tears itself completely apart.

William F. Marshall has been an intelligence analyst and investigator in the government, private, and non-profit sectors for more than 30 years. He is a senior investigator for Judicial Watch, Inc. (The views expressed are the author’s alone, and not necessarily those of Judicial Watch.)