Putting Meat Myths to the Fire 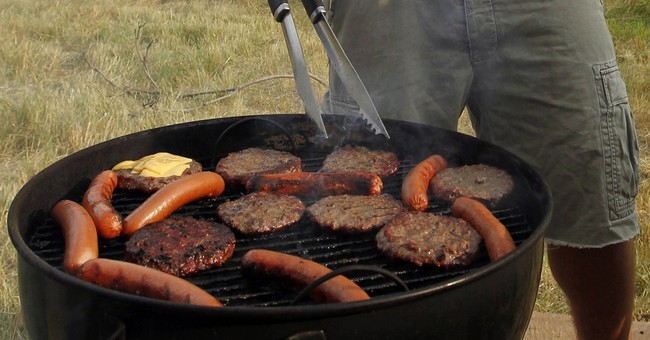 As is the American tradition, grillmasters will cook up pound after pound of juicy burgers, hotdogs, steaks, and shish kabobs at backyard barbeques this summer. There’s something for every type of carnivorous reveler: Strip steak, pulled pork, zesty wings, and lamb kebabs. Unfortunately, there’s an uninvited guest who might kill your next barbeque: Animal liberation activists.

Far from the polite vegetarian guest who might bring a tofu burger for the festivities, these zealots will cheerlessly recite a laundry list of what’s wrong with your burger: It kills the planet, kills you, and you’re just a jerk for finding Babe so tasty. These days, there’s no shortage of press releases or astroturf letters to the editor beating up on burgers.

In the chance you come across a guy who won’t just have a beer and chill out —it’s animal-free, after all—here are some tips to get them off your back and back to the salad bar.

Activists like PETA or the Humane Society of the United States (a national group not affiliated with your local humane society) are fond of saying that agriculture is responsible for 18 percent of global greenhouse gas emissions—conveniently forgetting to mention that the authors of the figure have since admitted their methodology was flawed. The EPA actually publishes data finding that agriculture (including non-livestock ag) in the U.S. is less than 7 percent of greenhouse gas emissions. Our farmers are far more eco-efficient than the Third World, after all. So what better time to buy American than the Fourth?

If you read the news, you’ve surely come across some hysteria that red meat is a ticket to an early grave. There’s a cottage industry of doomsday campaigns trying to link meat to bad health. A PETA ad in the UK comparing meat to smoking was recently found to be misleading by the Advertising Standards Agency and was banned. Another group, the PETA-linked Physicians Committee for Responsible Medicine (only 10% percent of its members actually graduated med school), tries to link meat to cancer and was mocked on Comedy Central’s The Daily Show.

For those familiar with the phrase “the latest study,” there’s enough research to link any food to just about anything bad. Even vegetarians aren’t immune: A 2008 Oxford University study linked a vegetarian diet with a higher risk of “brain shrinkage.”

With studies on meat, animal liberation activists have an incentive to spin the most minor finding, but fortunately there are actual experts who have weighed in. British cancer specialist Dr. Karol Sikora, for example, has stated that “red meat and bacon in moderation will do us no harm and to suggest they will is wrong.”

Studying diet is complicated. Studies may ask people to remember what they ate weeks previously or find a relationship that’s barely significant. If a study finds that burgers cause a 10-percent increase in an ailment that you only have a one-in-a-million chance of getting, for example, then pass the ketchup and mustard.

But why play defense to the anti-burger blowhards? If you really want to make vegans catatonic, let them know that a bovine-based diet actually kills fewer animals than being vegan. Think about it: A single cow, which can be pastured, provides loads of delicious protein, while the production of vegetables and grains requires the steady killing of pests that might pick off crops, to say nothing of the field mice decimated when a combine harvester rolls through. One Australian professor calculated that producing wheat and other grains results in “at least 25 times more sentient animals being killed per kilogram of useable protein.”

There’s nothing wrong with being a vegan, of course, but there’s nothing wrong with tweaking a self-righteous one, either. And our “plant-based” friends aren’t always wrong in promoting veggies: Mashed potatoes and creamed spinach go great with steak, and grilled asparagus and squash hold a great flavor. But in the spirit of summertime, they need to relax, kick back and let even the most carnivorous make their own choices.