Will Alexander
|
Posted: Jun 06, 2022 12:01 AM
Share   Tweet
The opinions expressed by columnists are their own and do not necessarily represent the views of Townhall.com. 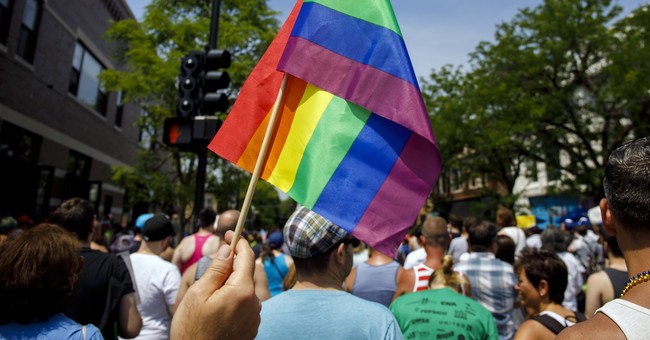 The Marine Corps tweeting honors to Pride Month with crayon-like rainbow bullets banded to a helmet was a historic moment because it signaled – at least for the hand-picked top brass – that the Democrats’ long war to get LGBTQ members to serve openly in the military, is finally over.  It’s been a triumph, not for national security, but of pure politics.

The Corps was a hard nut to crack, but it cracked.

“Throughout June, the USMC takes #Pride in recognizing and honoring the contributions of our LGBTQ service members,” read the tweet.  “We remain committed to fostering an environment free from discrimination, and defend the values of treating all equally, with dignity and respect.”

With two sentences, Earth’s manliest fighting force surrendered the demands of life’s most brutal profession to the cartoonish frivolities of leftist politics.  This is military suicide.  You don’t need a study, or a poll, and some egg-headed expert to tell you that.  It’s common sense.

Rank-and-file Marines are being asked – no, forced – to suspend common sense, ignore human nature, and justify a lifestyle (especially when it comes to transgenderism) that’s trying to create loopholes in divine law.  Most importantly for the military, Marines are being asked to pretend that being indoctrinated into the lesbian, bisexual, gay, transgender, queen agenda has no effect on them.

Early in my 20-year Marine career I was aboard the USS Duluth, an amphibious transport dock, as part of a six-month unit deployment to the Western Pacific.  I was a “grunt” (infantryman), assigned as a grenadier, in 1979, to 1st Platoon, A Co., 3rd Marines out of Kaneohe Bay, HI.

Before anchoring at various ports throughout the Pacific and the East China Sea, we sailed for weeks in the middle of nowhere and had to conserve the ship’s water.

That meant around 40 of us lined up at the opening of a couple of tiny, one-man showers near our berthing area, buck-naked and ready to take two-minute showers – the “Navy shower.”   You turned on the water to get wet; turned it off to lather; turned it on to rinse; and turn it off for the next Marine.

Imagine if someone like the transgendered Elliot Page (born Ellen) was next in line to shower in front of Marines who’ve been stuck on a ship for months.  Exactly.  You can’t imagine it with a straight face because it’s absurd.  It would never happen because Elliot Page is a biological woman.  It would be delusional to let her live and shower in the same tiny berthing area with a bunch of young Marines. She would need special accommodations.  And that’s the point.  This stuff disrupts unit cohesion.

But being buck-naked among male Marines, you never give a second thought because, at least when I served, we lived together in a squad bay – a big room with a concrete floor lined with twin-sized, prison-like bunk beds (racks).  In constant close quarters, we became brothers.

It was noisy and smelly, at times; you heard dirty jokes and yelled out reviews on restaurants, bars and girls.  You trained for war together, sweated together through some of the most challenging terrain on Earth; ate together both in the mess halls and in the field.  You laughed and cried together, traveled the globe together, and had fists fights but always worked out your differences.

Over time, you form this invisible bond of manly brotherhood without which wars are impossible to win.  That easy brotherhood is the mystical human polymer that can’t be measured with studies, surveys and polls.  So political experts discount it when they dishonestly come to forgone conclusions that an open LGBTQ lifestyle has no impact on unit cohesion or combat effectiveness.

Former Commandant Gen. Robert H. Barrow tried back in 1991 when he told a Senate Armed Services Committee that letting women serve in combat units would open the door to destroying the Marine Corps as we’ve known it, especially in conventional wars.

“I know it’s very popular to ridicule something called male bonding – but it’s real,” said Barrow, who commanded troops in World War II, Korean and Vietnam. “One has to have experienced it to understand it.  It doesn’t lend itself to easy explanations.  It is cohesiveness … it’s mutual respect and admiration.  It’s ‘one for all and all for one.’  It’s believing, as a unit, that no one else can do what this unit is being asked to do. Perhaps Shakespeare said it best of all: ‘We few, we happy few, we band of brothers.’ So, that’s what it is.”

Since that time, President Clinton signed Don’t Ask, Don’t Tell into law in 1993, which allowed gays to serve as long as they were closeted.  President Obama repealed DADT In 2011, allowing the gays to serve openly without consequences.

In 2013, Obama’s defense secretary, Leon Panetta, lifted the ban on women in combat units over the of Marine Commandant Gen. Joe Dunford who implemented Panetta’s directive by integrating two infantry companies and, through a series of training exercises, matched them against existing all-male infantry units.

In 134 combat tasks, all-male units outperformed gender-integrated units in 69 percent of the tasks.  In peace, that’s acceptable.  In war, it’s deadly.  Based on those findings, Dunford requested that the Marines be exempted from the new policy.  Obama’s Navy secretary declined.

In 2016, Obama’s Secretary of Defense Ash Carter ended the ban on transgenders in the military, announcing that, “Our military, and the nation it defends, will be stronger.”

As a retired Marine, the Corps’ Pride tweet was a huge gut punch.  It signals that there are no longer any generals like Barrows or Dunfords fighting from the inside to keep this kind of pure politics out of the military.  It signals that after 246 years as America’s premier fighting force, the Marine Corps is becoming feminized.

I will say as Gen. Barrow didn’t over 30 years ago, “If you persist in pushing this …, it will destroy the Marine Corps.  Simple as that – something no enemy has been able to do in over 200 years.”

During future Pride months, the Few and the Proud could take on an entirely different meaning.