Trump Derangement Is a ‘National Emergency’

Will Alexander
|
Posted: Jan 17, 2022 7:07 AM
Share   Tweet
The opinions expressed by columnists are their own and do not necessarily represent the views of Townhall.com. 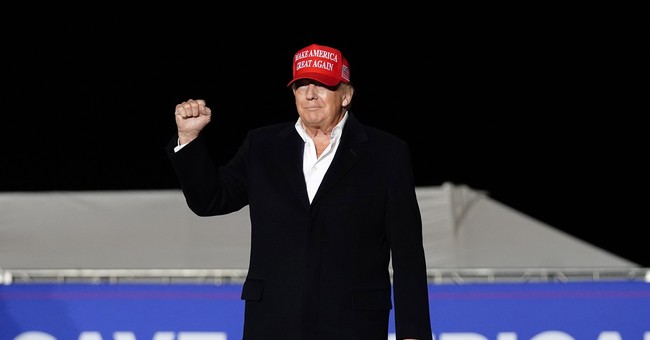 What would you say about a firefighter who speeds through town every day with sirens shrieking and horns blaring for cars to move over as he blows through traffic lights, then finally stops to gush tons of water on a building that was never on fire?

“He’s a nut! He’s crazy! The man should be nowhere near a fire engine!”

That’s how Trump’s enemies saw him back in 2016 – as a deranged fireman bullying people around and screaming about fires that didn’t exist.  Except they did exist. All over the place.

For the tens of millions who voted for Trump, the election was never really about Trump.  It was about the fires.  The issues.  Thanks to eight years of Obama “fundamentally” changing America, abnormal things were required to deal with an abnormal situation.  But as social, economic, and institutional fires burned out of control – with zero containment – the political class was stuck in one gear: Normal.

No politician or party wanted to risk breaking from the norm to do the abnormal things.  Except Donald Trump.  On the major issues, Trump came the closest to saying exactly what millions were seeing.  His voice, though unorthodox, was our voice.

With all his cantankerous, “unpresidential” bravado, Trump zeroed in on the elephants in the room.  He was a loud political Muhammad Ali who constantly boasted about “winning, winning, winning,” and doing things “big league.”  “I will be the greatest jobs president that God ever created,” he bragged, then vowed to back it up.

“It’s not bragging if you can back it up,” Ali used to say.

So we hired him.

But when he was elected, people who laughed him off were in shock. Then they panicked. Then they got angry. Then they went crazy. Then Trump Derangement Syndrome (TDS) kicked in. Today, TDS has metastasized into a blind, primal hatred that’s become a national emergency when you consider all the damage these people have done to the country.   And they’re not done.

All of a sudden, the same orthodox politicians who squirmed inside political straightjackets while watching fires burn the country to the ground unleashed boundless energy doing unorthodox, abnormal things – not to improve the country – but to “get Trump.”

Rather than offering better solutions to stubborn problems, consider all the rotten things Trump-haters have done to delegitimize him, and in the process, wreck the country:

Key Democrats and Republicans refused to attend his inauguration.  Hillary Clinton, Jimmy Carter, and others called him “illegitimate.”  Days before his inauguration, one congresswoman joined several lawmakers promising to “impeach the mother#*@ker.”  The intelligence apparatus was used to spy on his campaign.  The Russian collusion investigation was intentionally used to smear his presidency for more than two years, even when they knew early on that it was all bogus.   He was impeached twice – once after he left office.  The media defamed and lied about him every day of the four years he was in office.  The hatred was raw, relentless, and reckless.

Still, Trump  achieved historic political feats, in his unorthodox way, unravelling Gordian knots that had been gnarled up for decades:  America surpassed Saudi Arabia and Russian to become the world’s largest producer of crude oil.  The unemployment rate was lower than it had ever been in 50 years. Trump recognized Jerusalem as the capital of Israel, and signed the Abraham Accords which normalized relations between Israel and the United Arab Emirates, Bahrain, Morocco, and Sudan, with tacit approval of Saudi Arabia.  And he built over 400 miles of border wall, which helped reduce illegal crossings by nearly 90 percent.

But Trump’s enemies, sick with TDS, dug in even more to undermine him, especially after the nation careened into emergency mode with COVID.

Early on, doctors successfully prescribed hydroxychloroquine and ivermectin to help patients avoid hospitalization and death at the onset of COVID.  But the unthinkable happened. Trump called the drugs “game-changers.” The two drugs were immediately suppressed, and later, early treatment took a back seat to coercing healthy people to get vaccinated.  God only knows how many people died needlessly because therapeutics were blocked.

Trump’s enemies used COVID to get Joe Biden in office, a man who is now cheering Trump haters as they use sedition laws to charge Jan. 6 rioters.  They’re itching to implicate Trump for “inciting insurrection.”

“This is the thing that has disturbed me from the beginning,” said journalist Glenn Greenwald on Fox’s Media Buzz on Sunday.  “When they talk about the ‘enemies of democracy,’ they’re not just talking about the people who used violence at the Capitol, which we all agree was wrong.  They’re talking about the entire Trump movement.   Really, the entire Republican Party is how the media has begun to apply that terminology. … To me, this has been the most dangerous and concerning aspect of this entire ‘Insurrection’ narrative from the start.”

And that’s the whole point.   Ultimately, this isn’t all about Trump, even for the deranged. The demonization of Trump is being used to suppress political dissent of an entire party. Trump’s supporters are now targets of TDS.  Or as they call it, Trumpism, a derogatory term that’s twisted to mean far right, fascism or neo-nationalism.

They want to use the machinery of government to discourage grassroots conservatives from voicing the same concerns that drove them to hire Trump in the first place. Still, it’s all about the fires.

Besides, Derangement Syndrome didn’t start with Trump.  The late Charles Krauthammer, a trained psychologist, coined the term in a column headlined Bush Derangement Syndrome, in 2003.  He diagnosed BDS as “the acute onset of paranoia in otherwise normal people in reaction to the policies, the presidency – nay – the very existence of George W. Bush.”

Democrats, leftists, and the media hated Bush because of his policies. Trump, too. Trump attracted conservatives, in part, because Bush never fought back.  Trump got much worse treatment because he fought. But in the end, it doesn’t matter which Republican wins the presidency.  They’ll all get the crazy treatment.

These people are deranged enough to create fake emergencies out of whole cloth to get and keep political power, no matter how badly it hurts the country.

People so deranged should be nowhere near the corridors of power.