Will Alexander
|
Posted: Nov 02, 2020 12:01 AM
Share   Tweet
The opinions expressed by columnists are their own and do not necessarily represent the views of Townhall.com. 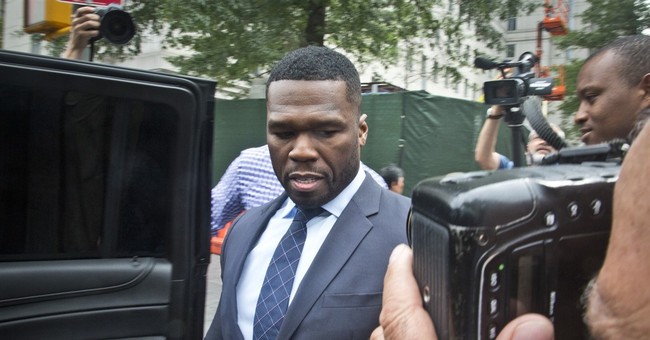 Liberal masters and overseers took the whip to a few saucy runaways who had the gumption to think they could escape the Democrats’ ideological plantation. The public whippings are designed to make other slaves think twice about thinking for themselves.

Whenever high-profile intellectual slaves flee the plantation, gaggles of barking bloodhounds track them down, threaten them, and use intimidation and extreme defamation to drag them back home. It’s become an unwritten Fugitive Slave Act used to perpetuate the left’s peculiar institution: intellectual slavocracy.

Intellectual slaves are people who hide their true convictions for fear of retribution from ideological slave masters and overseers. They’re given unbridled freedom on political issues as long as they stay within plantation boundaries. Overstep those boundaries, and you get a beating. No exceptions. No excuses. No escape.

Three of the most daring escapes were attempted recently by three rappers: Curtis James “50 Cent” Jackson III, O’Shea “Ice Cube” Jackson, and Dwayne Michael “Lil Wayne” Carter, Jr. They all got whipped, but their reactions to the beatings were different: Cold (50 Cent), lukewarm (Ice Cube) and hot (Lil Wayne).

50 Cent read that Joe Biden’s tax plan would confiscate 62 percent of his income. His gut reaction?

For as long as it took to send that tweet, 50 Cent inhaled the exhilarating air of freedom. But as he was exhaling, plantation bottom-feeders unleashed the bloodhounds.

“I had to remind him (50 Cent) that he was a black person,” said ex-girlfriend Chelsey Handler on the Tonight Show. “So he can’t vote for Donald Trump, and that he shouldn’t be influencing an entire swath of people who may listen to him because he’s worried about his own personal pocketbook.”

Others called 50 Cent a sellout and vowed to boycott his Power TV crime series.

“We won’t forget you sold us out even after the election,” said one tweet. “G Unit gear is trash … as well. Boycott all this waster does.”

The whippings worked. 50 Cent went cold. After less than a week as a fugitive, he ran back to slave territory. Rather than saying what he really thinks, he now thinks what slavers want him to think.

“Fu*k Donald Trump,” 50 Cent tweeted. “I never liked him …” He also blasted Lil Wayne for tweeting a picture of himself with Trump, writing: “I WOULD HAVE NEVER TOOK THIS PICTURE.”

OK, Curt. Say what you have to. But when you vote, go with your gut.

The verdict is still out on whether O’Shea “Ice Cube” Jackson remains a free thinker. That’s been challenged. Over the years, he’s authored a bombardment of angry, uneducated anti-Trump invectives – many too vile to repeat – but at least they were his genuine thoughts.

“I will never endorse a mothafu*ka like Donald Trump! EVER!!” he tweeted back in 2016. That was before Trump delivered unprecedented results to the black community; results that may have forced the rapper to rethink the media’s voodoo doll version of Trump.

Ice Cube met with Trump’s people in stealth mode, but plantation hounds soon picked up a scent that he had run off. Word spread that he was “working with Trump” to incorporate some of his “Black Contract With America” into the administration’s Platinum Plan.

Plantation overseer D.L. Hughley, a virulent Trump-hater, said the rapper is not qualified to speak for blacks; that he’s in over his head; and that by working with the president, he’ll end up killing his career because Trump “uses black people as props” and throws them away once he’s done.

Others called Ice Cube a “sellout,” an “Uncle Tom,” a “coon” and denounced him for going to the “Darkside.”

So Ice Cube blitzed multiple media outlets to set the record straight. In nearly every interview, Ice Cube’s “Black Contract” took a backseat to reporters poking and prodding to see whether he had warmed up to Trump. He never confessed.

“I’m not playing politics with this,” he said.  “I’m willing to meet with anybody who could bring this to life and make it a reality.”

OK O’Shea. But if you’ve warmed up to Trump and won’t say so because of the whippings, you’re not thinking freely. Taking the middle road will never be enough for these thought tyrants. So if you’ve had a “Malcolm X moment” that you’re keeping to yourself for fear of the thought masters, you’re still shackled to plantation rules.

Of the three rappers, Dwayne Michael “Lil Wayne” Carter, Jr. was the only fugitive to make a clean getaway.   After tweeting a picture of himself with Trump, praising his performance, and saying he’s “a really nice guy,” thought masters pulled out the whip and regurgitated the usual litany of threats and epithets. So far, he’s still off the plantation.

But Lil Wayne has a history of jeopardizing the security of the plantation.m He’s said that all police shouldn’t be blamed for what one policeman did to cause George Floyd’s death. In another interview, he shared a story about how a white policeman saved his life when he was 12 – a cop he affectionally calls “Uncle Bob.”

“I don’t know what racism is …” he said. “I have never witnessed racism.”

He’s also said that the name Black Lives Matter makes no sense to him and that the group has nothing to do with him because he’s rich.

While it may seem small in the grand scheme of things, the rappers’ gesture toward Trump is signaling that a watershed moment is coming for the abolition of black intellectual slavocracy. The turning point for all three rappers came after they focused more on the real-life implications of policies, rather than on personalities or party politics.

When blacks begin to do that in droves, public whippings will not be enough to keep them shackled to the infantile policies of the Democrats’ ideological plantation.