Will Alexander
|
Posted: Dec 18, 2018 12:01 AM
Share   Tweet
The opinions expressed by columnists are their own and do not necessarily represent the views of Townhall.com. 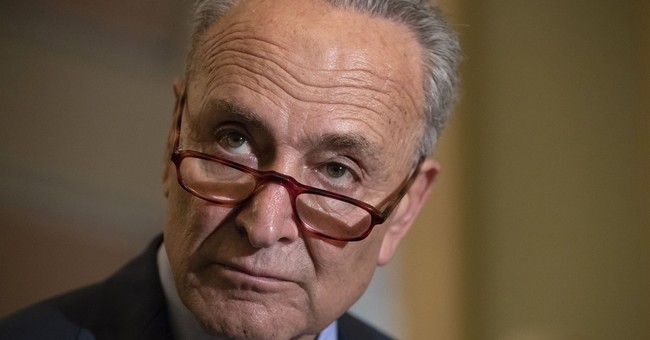 The teams shake hands.   The losers go back home to study what they did wrong.  They make adjustments.  And they prepare for the next game.

But can you imagine a disaster sports would be if the losers ignored the clock, broke the rules, called for refs to be fired, and just kept on playing after the game ended? Can you picture that happening in boxing, where the loser just keeps punching the champ long after the last bell?

Can you imagine if intimidated referees took sides with the losers and rigged the rules of the game so the losers could keep racking up points years after the clock runs out?

Insane? Yep. But that’s exactly what’s happening with Democrats and their rabid liberal fans ever since presidential power transferred to Donald Trump.  They’re trying to win a game that’s been over for two years. It’s exhausting to watch.

I like the Urban Dictionary’s definition: “A sore loser is someone who loses in a fair competition, but whines about it on a constant basis, blaming everyone around them for the loss except themselves; or tries to change the rules to their advantage once it’s evident that they’ve lost.”

Political campaigning is the sport of politics, but governing is serious business.  Once the votes are in, the game clock stops, a winner is declared, the campaigning stops, and the winner governs. Continuing to punch the daylights out of the winner after the match is over is not only foolish, but dangerous to the constitutional order.

The peaceful transfer of power is one of the most critical institutions – not only in America – but in the history of the world.  We’ve inherited this indispensable gift to help perpetuate our national longevity; but today’s political sore losers are botching it up.

So potent was the idea of peaceful transfer in Nixon’s day, that after losing to Kennedy by a slim margin in 1960 because of vote-rigging in Chicago, he said this to his supporters:

“As I look at the board here, while there are still some results still to come in, if the present trend continues, Mr. Kennedy, Senator Kennedy, will be the next president of the United States.  I want Senator Kennedy to know, and I want all of you to know, that certainly if this trend does continue, and he does become our next president, that he will have my wholehearted support, and yours, too.”

Nixon knew about the cheating but didn’t want to tear the country apart in a fight for votes; a principle he figured to be much bigger than his personal ambition.

That’s a long cry from the sore losers of today, who say this sort of stuff in public:

Sen. Chuck Schumer: “We are dealing with probably the most dangerous and worst man in the presidency we have ever had in the history of this nation.”

Hillary Clinton: “We have a president who is part of the cover-up as to what happened in that consulate or embassy when Mr. Khashoggi was murdered.”

MSNBC’s Mika Brzezinski: “I understand that Donald Trump doesn’t care.  But why doesn’t Mike Pompeo care right now? Are the pathetic deflections that we just heard when he appeared on “Fox & Friends”-- is that a patriot speaking?  Or a wannabe dictator’s butt boy?  I’m dead serious.”

Former President Obama: “When you hear how great the economy’s doing right now, let’s just remember when this recovery started.”

CNN’s Don Lemon: “The President of the United States is racist.”

Former CIA Director John Brennan:  “But I think some of his tweets just indicate how ill-suited he is for the presidency, and his handling of some of these issues demonstrates again he’s incompetent.”

Sean Penn: “We’re a nation in need of an assassination.”

Peter Fonda: “Want to stop this f@#*ing monster? … We should rip Barron Trump from his mother’s arms and put him in a cage with pedophiles and see if mother will stand up against the giant a@#hole she is married to.”

These are not Average Joes tweeting in a dark corner somewhere in the dead of night.  They’re prominent people, and they’re hateful emoting is having an insidious effect on the constitutional order.

Our greatest political leaders were fearfully aware of the fragility of democracy in a republic. We could use some of that fear.  Given the treacherous history of “un-peaceful” transition – by butchery, by coup d’état, by plot, or by assassination – the founders well understood naked human nature and set America up as a nation of laws, not of men.

Never in my life have I seen people at such high levels trying to wiggle away from those laws as we’re seeing today.  They’ve wiggled us into political mayhem.

Ultimately, the idea of a peaceful transfer is just that – an idea.  It takes frail men, through much pain and rare selflessness, to bring the idea to life.  And that’s the problem.

President John Adams had never known history to produce a large body of men who governed themselves well for long.

“Remember, democracy never lasts long,” he said.  “It soon wastes, exhausts, and murders itself.  There never was a democracy yet that did not commit suicide.”

“The lesson of our history,” wrote Charles Krauthammer, “ is that the task of merely maintaining strong and sturdy the structures of a constitutional order is unending, the continuing and ceaseless work of every generation.”

It’s far past time that Democrats, Leftists, left-leaning media and Trump-haters get the message.  The clock ran out on Trump’s election over two years ago.  The game is over.  You lost. You’re starting to look stupid.  Get off the field, go back to the locker room, and try for a win in 2020.