Real Collusion is Much Deeper Than Donald Trump Jr.

Will Alexander
|
Posted: Jul 15, 2017 12:01 AM
Share   Tweet
The opinions expressed by columnists are their own and do not necessarily represent the views of Townhall.com. 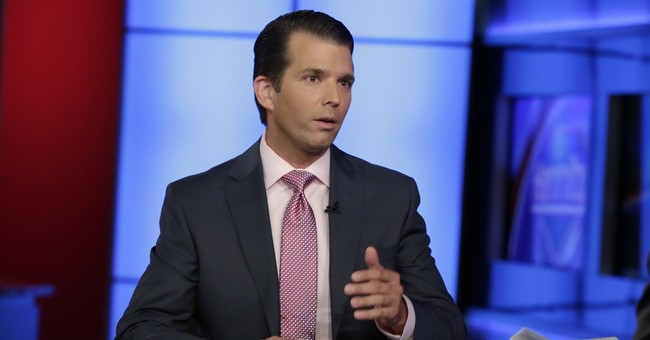 Far worse than what Trump Jr. is accused of doing, is the media’s reaction to it. Even if you believe his meeting with that Russian lawyer was a mistake, it’s just a guppy in a vast sea of political sharks. America’s got much bigger fish to fry.

Just ask an exasperated Jamie Dimon, JPMorgan’s CEO, who believes the press has lost the big picture. In a Friday conference call he said that the U.S. has become “one of the most bureaucratic, confusing, litigious societies on the planet. … It’s amazing to me that every single one of those countries (France, Argentina, Israel, Ireland, India and China) understands that practical policies to promote business and growth is good for the average citizens … somehow (in) this great American free enterprise system, we no longer get it.”

I’m certain Dimon has his differences with Trump, but he’s hoping the president can be a catalyst to long-overdue breakthroughs in taxes, regulations and infrastructure.

But the media’s differences with everything “Trump” have been way out of whack – like trying to kill a fly with a bazooka. Everywhere the fly flits, a trigger-happy media empties its big guns to kill it: “Boom! Boom! Boom! Boom!”

The fly gets away, but the skirmish leaves the national house in a mess. It’s no wonder good people shun public office. Governing is hard enough without “friendlies” shooting at you with bazookas for no good reason. The reportage on Trump Jr. is embarrassing.

When did digging for facts before reporting conclusions become blasé? Frenzied journalists now report conclusions, then scrounge for facts to back them up. “I don’t feel like they have it (evidence of collusion),” said CNN producer John Bonifield, “but they want to keep digging.”

Reporters know there’s no Russian collusion. The public knows it. Politicians know it. Investigators know it. Russia knows it. The world knows it! It’s all a media-created patchwork of conjured-up scandal feeding on itself to boost ratings and rack up rigid ideological points. There never was a collusion scandal. Activist journalists cobbled one together using the snows from last winter’s election. They’ve now built a very scary-looking political snowman (“Collusion”) that they continue to parade before the public.

“Hmm, OK yes,” says the public, squinting with suspicion. “I think I do see something now.”

It’s summer. The media felt the heat after the CNN firings, undercover videos, and the president’s G-20 bump. Just as the scary Russian Snowman was melting away, Trump Jr. threw the media a political snowball, reviving hopes that their doomed creation could survive the summer.

“Vindication! Mwa-ha-ha-haa! …,” they report, as they gloatingly mistake Trump Jr.’s snowball for Antarctica.

Activist journalists have thundered for months about collusion, forecasting massive storms of impeachable scandal. So far, all we have is this desperate little snowball (sorry Charles Krauthammer), and the public is mind-numbingly fatigued with all this.

The media’s lightning crackles about collusion have nothing to do with their passion against foreign interference. If that were true, they would’ve bickered about it in the Obama days. They didn’t. And that’s what’s so ugly about all this Chicken Little collusion stuff; it’s nakedly one-sided. There was lots of hacking going on under Obama, and not just Russia.

China hacked into the records of 22 million Americans at the Office of Personnel Management in 2015. The intrusion exposed Social Security numbers, fingerprints, information on family/friends, addresses, financial and health histories, and foreign travel and contacts. That breach came after 4.2 million Interior Department computers were hacked earlier that year. Remember that?

Those hackings were reported, but not at the decibels of the Russian intrusions.

So something else is going on. This is all ideological. Trump is just the latest target in a deeper war that’s been waging for decades.

The real collusion is between indignant Democrats and activist journalists who have teamed to unseat a duly elected American president. They’re on a remorseless quest to push these moments into history, like Watergate – which they missed.

What happened to the peaceful transfer of power? Until this election, we’ve anchored ourselves into the idea that a smooth transition to power is sacred to a healthy democracy. The real colluders recklessly butchered that principle this election.

The will of voters surfaces through election results. The American people spoke in 2016. Their vote was a frantic 9-1-1 call. To them, crippling social, economic and institutional fires burned out of control, and no one did anything about it.

Trump was elected with a mandate to run the political red lights, break bureaucratic speed limits, and crank up the sirens of common sense as loud as needed to start containing some of the nation’s most monstrous fires. We’re not shocked that he’s unorthodox. Let it go. Orthodox politicians let the fires burn.

As Trump burned rubber through the streets of our bureaucracy, Leftists, revengeful Democrats and activist journalists colluded to obstruct his progress at every turn. They’re not only refusing to pull over, they’ve become political arsonists – gushing fuel on the very fires that need to be contained.

But seething at the root of all this noise is an ideological war that’s been growing for decades. We’re witnessing the adulthood of a clash of two opposite, irreconcilable wills imposing themselves on America. The side that loses the will to win, will lose the war, no matter how righteous the cause.

When one Democrat congressman has the foolish audacity to draw up articles of impeachment, and another senator mindlessly suggests that the president’s son committed treason – a capital crime – it tells you how desperate they are to win; even if it damages the very institutions that protect us all.

Trump Jr.’s meeting was just another skirmish in a much larger ideological war – a war that predates Trump Sr. It’s this primal source of America’s antagonistic tribalism that we need to learn more about; otherwise the good guys will continue to get sidetracked into the weeds by shiny “collusion” schemes, while deep social, political and institutional anomalies keep popping up like Whack-o-moles.