Wes Martin
|
Posted: Feb 17, 2021 12:01 AM
Share   Tweet
The opinions expressed by columnists are their own and do not necessarily represent the views of Townhall.com. 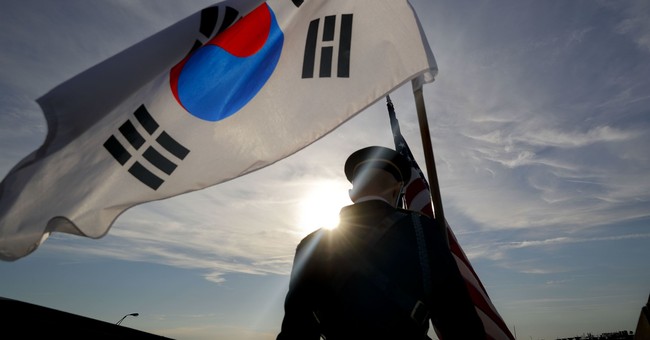 In early January, the Seoul Central District Court in South Korea issued a surprising judgment with potentially far-reaching global impact, ordering the Government of Japan to pay $91,800 to each of the 12 last surviving “comfort women” from Japan's World War II-era military brothels.

The ruling not only represents a setback in diplomatic relations for the region at large but also seeks to challenge longstanding principles of international law.

The announcement, which additionally included execution orders to seize Japanese government-owned property, was met with mixed reactions. South Korean civic groups who have long advocated on this issue celebrated. Japanese Foreign Minister Toshimitsu Motegi rejected the ruling, stating that it "is extremely regrettable and absolutely unacceptable, as it is clearly contrary to international law and agreements between the two countries." South Korean President Moon Jae-in said he was “honestly bewildered” by the court’s ruling.

Both Minister Motegi and President Moon understand that the standards of his highly emotional historical dispute, the South Korean court’s ruling raises a number of thorny issues.

The Japanese government refused to participate in the trial nor appealed the decision. Instead, Japan rejected the court’s authority for lack of jurisdiction on the basis of sovereign immunity in international law. Furthermore, there already exist 1965 and 2015 agreements between South Korea and Japan resolving these claims which are violated by this court’s ruling.

This action by the Seoul Central District Court may prove difficult to unwind. Though there are specific conditions for exceptions of immunity, South Korea’s claim doesn’t appear to meet that criteria.

It began back in 1997, when a Greek court first entered the fray to challenge the principle of sovereign immunity, ruling in favor of a group of plaintiffs seeking damages from Germany for the 1944 Nazi massacre in Distomo. This was followed by a 2008 enforcement order granted by an Italian court, allowing Greek plaintiffs to seize German property, including a villa near Lake Como. The Italian courts also ruled in favor of another Italian citizen’s lawsuit against the German government.

Germany then took the case to the International Court of Justice (ICJ) and won with the 2012 ruling on Jurisdictional Immunities of the State, which found that the Italian Supreme Court's rulings violated international law, and that Germany’s sovereign immunity should remain intact.

What is striking upon a cursory glance is that the ruling acknowledges the 2012 ICJ precedent, and then bases its argument on a rather heavily criticized 2014 ruling in the Italian Constitutional Court, which argued that with regard to matters of war crimes and crimes against humanity, customary international law doesn’t apply and instead local courts reign supreme.

This logic appealed to the judge in this case. According to the main activist group, known as the Korean Council, the decision represents a "landmark ruling," while urging that Japan “should honor the ruling and pay the compensation immediately." This Korean Council willfully ignores the massive volume of reparations Japan has already provided South Korea.

Making the matter even more complex, before a legitimate international court Japanese leaders may rightly argue that they have agreed to resolve the issue several times and reached the 2015 “final and irreversible” settlement in the past only to be rejected. Brokered by the Obama administration, and specifically Biden’s new top diplomat Antony Blinken, the agreement included a 1 billion yen fund for direct payments to surviving victims. But the activist group impeded these payments, and the fund was later dissolved by the new government, claiming dissatisfaction with the agreement negotiated and signed only two years earlier.

The court’s ruling may rather be seen as rhetorical, a message more likely to be used as a negotiating tactic for yet another settlement rather than achieve a legal outcome – but these are dangerous waters to navigate.

President Moon Jae-in now finds himself in a very tough situation. The former director of the Korean Council, Mee-hyang Yoon, was recently elected to parliament for his party, only to face criminal embezzlement charges for stealing from the comfort women charity. Now the activists are furious with him for his apparent reluctance to embrace the court ruling, questioning his loyalty to this burning nationalist issue.

Then comes the issue of property seizure. Many countries wish to declare that their own national constitutional norms outweigh international norms. If true, the resulting potential for seizures and expropriations of foreign assets would quickly unravel the international order. This is the reason why Vienna Convention on the Law of Treaties denies to invoke the provisions of its internal law as justification for its failure to perform a treaty.

President Moon understands very clearly that it is a top priority for the new inaugurated administration of President Joe Biden to have a functional relationship between South Korea and Japan. Japan has played a critical role in supporting South Korea’s survival against North Korean aggression in every decade since the 1940s. Japan is also South Korea’s principal geographic ally in opposing China’s ever-increasing encroachment against the region’s democratic nations.

If South Korea proceeds on shaky legal grounds to begin seizing Japanese-owned property and passing legal decisions that violate international law, many analysts fear that nothing could salvage the relationship. This will indeed be a very dangerous and unacceptable situation for the region at large.