Wes Martin
|
Posted: Apr 20, 2019 12:01 AM
Share   Tweet
The opinions expressed by columnists are their own and do not necessarily represent the views of Townhall.com. 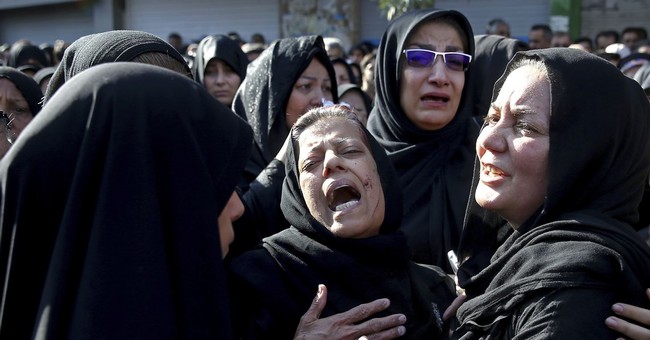 President Trump’s recent decision to formally identify the Iranian Revolutionary Guard Corps (IRGC) as a Foreign Terrorist Organization (FTO) has been long overdue.The FTO designation was originally developed by Congress during the Clinton Administration.Abuses in its application by State Department, most notably Madeline Albright’s designation of the Iranian opposition group Mujahedin-e Khalq as an FTO, resulted in the 2005 Congressional modification.Per the revision, an FTO must be foreign, have the means to attack U.S. citizens at home or abroad, and have the intent to do so.

Since its creation following the 1979 Iranian Revolution, the IRGC exemplified all three standards.IRGC is a 125,000-member-strong criminal enterprise faithfully serving the number one state sponsor of international terrorism.The IRGC controls much of the Iranian economy and has been funding Hezbollah and other organizations determined to attack and destroy governments throughout the world.It is also exists to make certain neither the regular army, the police, citizens, nor political opposition rises up to overthrow the repressive regime that has laid waste to Iran for the past forty years.

In 1996, the Federal Bureau of Investigation presented the Clinton White House with solid evidence that the IRGC was behind the Khobar Towers bombing.President Clinton believed Iranian President Khatami was a moderate; so, for the sake of appeasement, nineteen service-members murdered in the Towers’ attack were overlooked.

The Bush 43 Administration was even worse. For decades the Pentagon leaders understood the balance of power between Iran and Iraq must never be broken.For eight years, the Iraqi-Iranian war was a stand-off.The Iranian military, even with its IRGC, never captured more than a few miles of Iraqi territory, which it quickly lost.

Taken in by their own wrongful ambitions and accepting deceitful intelligence reports provided by Iranian operative Amad Chalibi, team Bush sent coalition forces into Iraq.Saddam had nothing to do with 9-11.

As the British were capturing Basra and Americans were rolling to Baghdad, the IRGC was taking over the local Iraqi governments.The result of 4,500 American service-members killed and 32,000 wounded was to make a gift of Iraq to Iran.Just this month, the Department of Defense confirmed 608 of those deaths were directly attributed to actions of the IRGC.

In addition to its own direct operations, from the very beginning, the IRGC was providing Iraqi militias such as Sadr’s Mahdi Army and the Hakim’s Badr Corps with weapons and explosive devices.Intelligence gathered from studying the effectiveness of attacks against coalition forces were being studied by the IRGC and the Iranian Ministry of Intelligence and Security (MOIS) to determine more lethal ways to destroy American up-armored vehicles.

Terrorism by proxy is a trademark of the IRGC.Hezbollah was organized and funded by the IRGC to undermine the Lebanese government and to threaten the existence of Israel.The 1983 Beirut Bombings resulted in 241 Americans and 58 French peacekeepers killed.

When Assad was in jeopardy of being overthrown by civil war in 2011, Hezbollah was ordered to turn north and enter Syria, where they were joined by units of the IRGC being transported through Iraq.

The IRGC does not limit its terrorist activities to the Middle-East.American law enforcement prevented the IRGC’s bombing of a Washington D.C. restaurant in an effort to assassinate the Saudi ambassador.Instead of the Obama Administration taking firm action against Iran, Hillary Clinton’s State Department’s aggressive response was to suggest “increased diplomatic isolation.”Nothing was going to get in the way of the nuclear weapons deal which released billions of dollars into Tehran’s further exportation of international terrorism.

The loudest endorsement of President Trump’s correct decision concerning the IRGC designation comes from the unprecedented silence of Congress.For once, no one is arguing.