This Is the Michael Dukakis Election of 2020

Wayne Allyn Root
|
Posted: Oct 26, 2020 11:42 AM
Share   Tweet
The opinions expressed by columnists are their own and do not necessarily represent the views of Townhall.com. 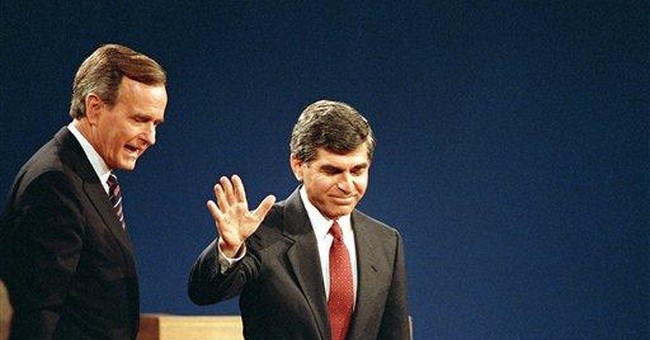 I've been calling this presidential election the "Michael Dukakis election of 2020" for months now -- all through the summer, when Joe Biden was up by double digits, just like Dukakis.

That was before Rudy Giuliani announced he had Hunter Biden's infamous laptop with a treasure trove of emails that appeared to implicate Joe Biden in a massive pay-for-play conspiracy and identify Biden as "the big guy" -- a partner in business with the Chinese Communist Party.

That was before Hunter Biden's former business partner Tony Bobulinski announced he can prove Biden had a piece of all the dirty deals. He's now meeting with the FBI.

That was before Joe Biden announced in that debate that he plans to destroy the oil industry. Biden just lost every oil and energy state (see Pennsylvania) and the votes of millions of oil-industry employees.

Back to Michael Dukakis. Remember him? In 1988, he was the Democratic presidential candidate. He led Republican candidate George H.W. Bush by 17 points over the summer. Seventeen. Remember that number. It's significant.

Think about that for a moment: down by 17 and then winning in close to a 4-to-1 electoral landslide.

That's pretty close to what I predict is about to happen in this Trump-Biden race.

Keep in mind as I make this prediction that almost every poll still shows a big lead for Biden. Still, Politico reports a massive Democratic early-vote lead in swing states. Still, Peggy Noonan writes in the Wall Street Journal that Biden "has a formidable lead." Still, the Biden team is measuring curtains for the White House -- just like Hillary Clinton and Dukakis did. The Wall Street Journal wrote in a headline, "Biden Team Prepares for Potentially Bumpy Transition." The D.C. Swamp "experts" clearly believe it's over.

Funny how history doesn't just repeat itself; it rhymes.

Folks, this is Dukakis all over again. And, of course, Clinton in 2016. How quickly they forget.

The NBC News/Wall Street Journal poll showed Trump losing by 17 only two weeks ago. Most other polls showed double-digit leads. As Peggy Noonan puts it, "formidable."

Except there's a fly in the ointment. Just like four years ago, the experts have it all wrong. History proves that whichever candidate leads with enthusiasm wins. Trump holds two rallies a day with tens of thousands attending, waiting in line all night to see their hero. Trump car parades and boat parades feature thousands of cars and boats. In Miami, Trump car parades in consecutive weeks brought out 35,000 and 75,000 cars. These are fans who would walk on broken glass to fight for Trump.

Meanwhile, Biden and Kamala Harris keep showing up to rallies with 10 people, covered in masks, in socially distant circles. How depressing. Biden's car parade in Miami attracted 15 cars, the day after Trump's attracted 35,000.

Folks, this is a carbon copy of Clinton four years ago, except much worse. There's much less enthusiasm. It's much more depressing. I didn't think that was possible.

Yet the D.C. Swamp media are clueless. They don't see it coming. They have no idea.

What's happening? It's what I named in 2016 "the Whisper Vote," except this time, it's squared, times 1,000. In 2016, many Trump voters were afraid to say out loud they voted for Trump. They were scared of the stigma, of being called a racist.

Fast-forward to today. It's been four years of vicious media assaults on Trump; four years of impeachment attempts; four years of calling Trump a "Nazi," "Hitler" and "the KKK"; four years of liberals on social media begging for Trump's death or assassination. And, lately, it's been riots; looting; burning; entire downtown business districts held hostage; attacks on police and Trump supporters; and surging murder and violent crime rates. Add in censorship and banning by Twitter, Facebook and the rest of Silicon Valley. And Trump supporters ostracized, losing their jobs and careers.

And we all know liberals have plans in place to burn American cities to the ground if Trump wins. They've made it clear the revolution begins the day after the election.

So, you think anyone anywhere wants to tell a stranger they're voting for Trump this year? This election is so far beyond 2016 it's laughable. This is pre-Civil War.

The polls no longer matter. The voters don't talk to pollsters. They whisper.

An electoral landslide is coming for Trump. It's the Michael Dukakis election all over again. With a touch of Hillary.