Wayne Allyn Root
|
Posted: Jun 26, 2018 12:01 AM
Share   Tweet
The opinions expressed by columnists are their own and do not necessarily represent the views of Townhall.com. 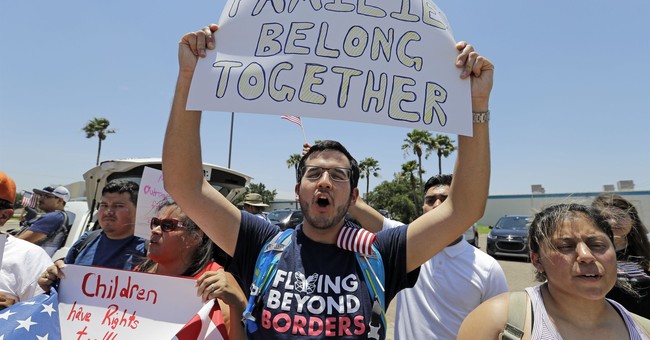 It's time to address the “Nazi, Hitler, Holocaust issue.”

I’m a Jew. It’s time to stand up to these mentally disturbed, liberal bullies, frauds and exaggerators. Nothing compares to the Nazis. Nothing is the Holocaust. No one is Hitler.

Stop using those words, you frauds. Do you know how ridiculous you sound? You’re destroying the meaning of such powerful words. “Never forget” will soon be forgotten, because you’ve trivialized the meaning of the words “Nazi, Hitler and Holocaust.”

There is no comparison in this modern word to those horrible words and deeds (except for radical Islamic terrorism- which Democrats don’t seem too concerned about).

Nothing is “the Holocaust.” No one is a “Nazi.” No one is
“Hitler.” Hitler killed 6 million of my Jewish people. His troops raped, tortured, enslaved and murdered my people. They gassed them in showers. They suffocated them in railcars. They starved and worked them to death. They gunned my people down with machine guns.

Last I checked, Trump hasn’t killed one Jew. Or one Mexican. Or anyone else.

No one is killing immigrants- legal or illegal. We are actually spending billions of taxpayer dollars on people who have no right to be here. We treat their kids, 90% of whom are unaccompanied minors (abandoned by their own parents), so well its remarkable. No other country in the world treats illegals or their children with such compassion, care and expense.

Hitler? Trump’s America is more like the Hilton than Hitler.

Please stop using terms like “Hitler” and “Nazi” and “Holocaust” because you simply don’t agree with someone’s politics.

While you're at it, stop chasing Trump Cabinet members out of restaurants. Stop refusing to serve food to Trump staffers. Stop demanding the president's son be caged with pedophiles. Stop screaming "F You" at the president. Stop calling for public harassment of the president and his allies.

Actually, while nothing compares to the atrocities of Hitler and the Nazis, that kind of behavior sure comes close to acting like "Nazis." Isn't that ironic?

And it's funny how no one in the mainstream media ever got stirred up over Obama weaponizing the IRS and other government agencies to purposely destroy the lives of his political opponents. That also sounds alot like "Nazi behavior." But back then, no one seemed to care.

But when Obama did it...crickets. No one shouted "Hitler" or "Nazi."

You say “Trump is Hitler” yet millions of Mexicans, Central Americans, Muslims, Africans and Cubans are desperate to come to Trump’s America!

If it's so terrible, why do they want to come?

Because as “terrible” as Trump is (according to thankless, miserable, depressed, negative liberals), Trump at his worst is far better and nicer to immigrants, than the presidents of any African, Mexican, Central American or Cuban hellhole are to their own citizens. America at its worst and most “racist” is far better than anywhere they’re coming from. Not even close.

Otherwise why do they come? Why don’t all these immigrants just stay in Mexico? Doesn't Mexico want them? Won't Mexico pay for their kids?

Maybe liberals ought to smoke on that one for a while.

Trump isn’t Hitler. And America isn’t “the Holocaust.” Trump's America is the best place in the history of the world. So, shut up and stop your hysteria.