The Suicide of the NFL

Wayne Allyn Root
|
Posted: Sep 27, 2017 12:01 AM
Share   Tweet
The opinions expressed by columnists are their own and do not necessarily represent the views of Townhall.com. 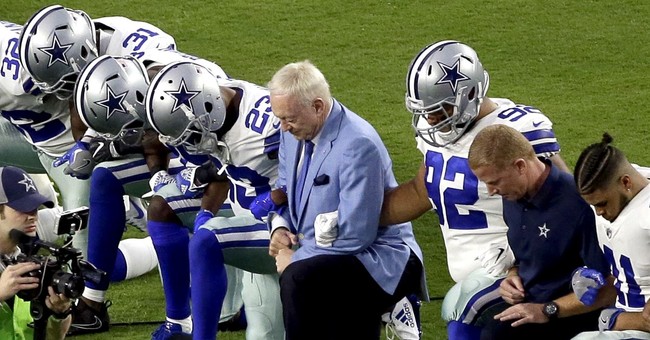 This is the story of the suicide of the NFL.

Every liberal CEO in America should be watching and listening. This is a case study for how to destroy a billion-dollar business by injecting your offensive leftist politics and alienating your own customer base.

President Trump has done it again. No, I don’t mean he’s offended millions of Americans. I mean he said exactly what was on the mind of tens of millions of middle class Americans. Call us the Silent Majority. Because of Trump, our views now count.

Don’t look now but Trump just kicked the NFL’s rear end. Ratings are plummeting. Revenues are plunging. The player’s spokesman deals are being cancelled. Fans are booing. Fans are burning tickets and uniforms. Lifelong NFL zealots are vowing to never watch another game. And the #1 selling jersey in the USA is a Pittsburg Steeler backup- a former Army Ranger with the courage to stand for the national anthem.

The Silent Majority is speaking loudly and clearly.

When you offend 63 million Trump voters, your business suffers, your bottom line plunges...

And the Emmys- with the lowest ratings EVER.

And Hollywood box office revenues- the worst in 25 years.

And NBC’s Megyn Kelly- whose career is on life support. She's so scared of Trump's voters she just announced her new NBC morning show will be a "politics free zone."

And Arnold Schwarzenegger- who flopped as host of “Celebrity Apprentice.”

And Dwayne "The Rock" Johnson, who recently suffered his first-ever action movie flop, after disrespecting Trump.

My grandfather put it best. He taught me there are only two rules to business:

#1) The customer is always right.

All of these athletes, entertainers, CEOs, businesses and leagues like the NFL have free speech. They can say whatever they want. But so can we- the customers. But we always get the last laugh.

Always assume your customers are 50/50 liberal vs conservative. Therefore, any political statement you make risks offending and alienating half your customers. So, shut up. Don't do it. Keep your views to yourself. Unless you want to lose 50 percent of your customers.

But what if your specific customer base is 70 percent conservative or center-right? Well then you could ruin your entire brand forever. Enter the NFL.

The typical NFL fan is a flag waver. They always stand for the national anthem. They wear flag pins and chant “USA, USA, USA!” They love cops and military. They're far more likely to eat hot dogs and drive a SUV, than eat tofu and drive a Prius. In short, they are middle class Trump voters. Not all of them. But a significant majority.

Doesn’t the NFL Commissioner know this? Don’t the executives at the NFL’s Park Ave. offices know this? What world do they live in? The NFL doesn't understand, or give a damn about their own customers? The NFL wants to go to war with their own best customers? Really? Wow.

So, this isn’t about free speech. This is about the survival of your business and destruction of your brand. Someday this will be a case study in how to destroy a brand in business schools. Just like ESPN. Because ESPN's customers are the same middle class (and above) Trump voters as NFL fans.

Now it’s time to REALLY bring the NFL to its knees.

If you’re betting on the games here in Vegas, or you're just a superfine going into withdrawal, just watch them online, or on your iPhones. But make TV ratings collapse. That's what matters to NFL owners. Hit them in the pocketbook. They make no money when you watch online.

Write every NFL sponsor and demand they cancel their NFL advertising campaigns, or we’ll stop buying from them.

Call your Governor and demand your state immediately withdraw all state subsidies from your local team.

Call your Congressmen and demand the NFL’s anti-trust and tax exempt status be withdrawn immediately. Ouch. This one’s gonna hurt!

It’s time to teach the NFL a lesson. The Silent Majority counts. What we believe in- God, country, Constitution, flag, national anthem, American exceptionalism- matters. Start worrying about offending us.

The NFL is about to learn a bitter lesson. Trump 35-NFL 0.