DACA: Trump's 'Art of the Deal'

Wayne Allyn Root
|
Posted: Sep 14, 2017 12:01 AM
Share   Tweet
The opinions expressed by columnists are their own and do not necessarily represent the views of Townhall.com. 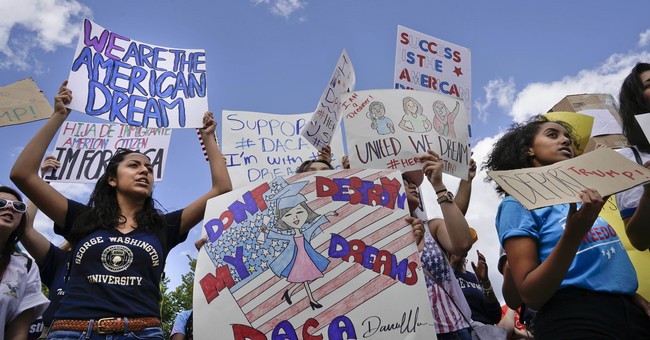 Liberals are freaking out over Trump "killing" DACA (Deferred Action for Childhood Arrivals). But is that what just happened? Or is Trump just gain showcasing his skills at "The Art of the Deal"?

“There are those in the immigrants’ rights community who have argued passionately that we should simply provide those who are [here] illegally with legal status, or at least ignore the laws on the books and put an end to deportation until we have better laws. ... I believe such an indiscriminate approach would be both unwise and unfair.”

Then, out of the blue, Obama gave amnesty anyway. But even after deciding to become a dictator and creating DACA with Executive Order, Obama publicly called it “temporary.”

All Trump did was correct Obama’s illegal, un-Constitutional action…follow the letter of the law…hand it back to Congress…publicly challenge and embarrass GOP Congressional leaders like Paul Ryan and Mitch McConnell to do their job…and here’s the big one…

Trump just showed why he's the master of "The Art of the Deal." I'm betting Trump just started a first round of negotiations on DACA.

Unfortunately, RINO establishment GOP leaders don’t understand “the Art of the Deal.” Everything in Washington DC is a negotiation. Why would I give you something and get nothing in return? Maybe we should ask moronic GOP leaders, who have cut horrible one-sided deals for years, gaining conservatives nothing in return.

Trump didn’t kill DACA. He’s simply a brilliant businessman and negotiator looking for a fair deal. By throwing it back to Congress with a six-month deadline before DACA dies, President Trump has put conservatives in "pole position" for a good deal.

So, let me dream out loud. Here's the deal I'd accept in return for passing DACA. I'm betting most conservatives would accept this deal too. Is this where President Trump is headed?

#1) Congress passes a dramatic tax cut- the biggest in American history. This is the only way to save the middle class and permanently turn around the U.S. economy. Tax cuts cannot be “revenue neutral.” They must be…LARGE and significant for every income group. That’s how you inspire patriotic American entrepreneurs to take risks and create quality middle class jobs by the millions.

#2) Congress funds the wall. This one is non-negotiable. Either we get the wall, or DACA is finished. Simple.

#3) Congress votes to end birthright citizenship. How stupid do you think we are? Well that question applies to commonsense conservatives like me. It certainly doesn’t apply to idiots like the GOP leadership. Why would I allow 800,000 people illegally in the country to stay, unless I fix the problem so it can never happen again?

#4) Every single one of these 800,000 "dreamers" must serve in the military. This is how they show their patriotism and thanks to the American people and at the same time, pay off their debt of gratitude.

#5) Now to the terms of DACA. Because clearly all 800,000 cannot be granted legal citizenship. There are reports many thousands of these "dreamers" have criminal records. There are reports President Obama purposely never conducted a detailed vetting of their backgrounds.

So, there are certain non-negotiable deal points:

A) All "dreamers" will undergo extreme vetting.

B) If you’ve ever committed a crime while here, you’re deported.

C)  If you ever voted in the past, you committed voter fraud and almost certainly Identity Fraud too. You’re deported. Liberals claim there’s no mass voter fraud by illegals. Really? Let’s find out.

D)  You must agree to not accept welfare, food stamps or any other form of government welfare for the first five years after DACA. Liberals claim you’re all here to work. Really? Let’s find out.

E) You must possess proficient English skills. If you can't pass an American history examine in English, you can’t stay.

If President Trump can negotiate this deal, he is the greatest deal-maker ever in the White House. And he’ll have the support and blessing of 63 million conservativeTrump voters. I predict this kind of deal would win Trump re-election by landslide in 2020. Wanna bet?