Wayne Allyn Root
|
Posted: Feb 17, 2017 12:01 AM
Share   Tweet
The opinions expressed by columnists are their own and do not necessarily represent the views of Townhall.com. 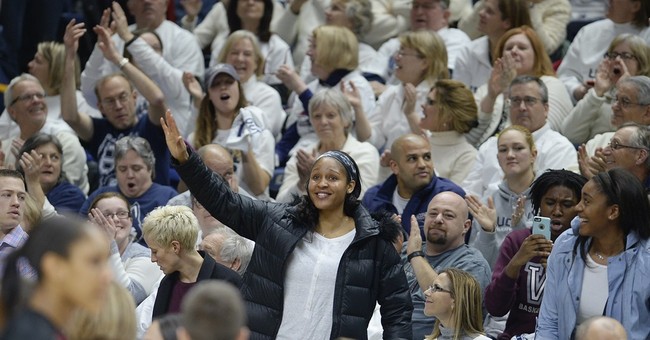 Don't look now, but it's time for "The 62 million." It's Donald Trump and his 62 million voters against the world. Everyone is against us.

It's clear that no one wants to risk offending "Black Lives Matter." We can all clearly see that companies and retailers bend over backwards not to offend Democrats, liberals, women, blacks, Latinos, Muslims, gays, even transsexuals.

Offend any of those groups and you are met with a national boycott. Or like Ivanka Trump, your clothing line is cancelled, kicked out of stores. You can lose your career, business or livelihood in a nanosecond.

But what if the shoe was on the other foot?

Do 62 million Trump voters count? Does anyone care if we’re offended?

Do any CEO’s or Board of Directors care if we stop buying? What if all 62 million Trump voters decided to boycott bleeding-heart liberal CEOs and their companies? Would that get anyone’s attention?

Because I think it’s time for a "62 Million Man and Women March." It doesn’t have to be a physical march on Washington DC. Because conservatives have busy lives- we have no time for “protest marches.” We’re too busy building careers, businesses and families.

Trump voters can create a much more effective “march” to payback liberal companies for their disrespect of President Trump. Our march won’t be a physical protest. It will be a financial protest.

Stop watching the Oscars…Grammys…Emmys. Let liberal actors, singers and artists scream and lie hysterically about Trump, curse Trump, threaten Trump all they want- but no one will be watching.

Stop going to movies of big mouthed liberal Trump-haters like Meryl Streep, Robert DeNiro, George Clooney, Sean Penn. When ticket sales are down 50% to their movies, when their latest movie bombs, they’ll get the message to shut the hell up and keep their liberal views to themselves.

Stop buying music from liberal singers like Madonna, Lady Gaga or Beyonce. When their CD sales are down 40%, they’ll get message Loud and clear.

Stop buying coffee at Starbucks. Those 10,000 refugees the Starbucks CEO wants to hire will have to make coffee for themselves and 5 aging hippies with “F-Trump” T-shirts. Good luck to the shareholders of Starbucks.

The list is long. These companies have all made their beds. Let’s teach them who the boss it. Two can play the boycott game.

Liberal CEOs are so worried about offending illegal aliens, but not 62 million Trump voters.

They are worried about offending foreigners, but not American patriots.

They are worried about offending transsexuals, but not a hundred million moms and dads, with beautiful kids (who are future customers, by the way).

They are worried about offending about 5 million Muslims in the USA, but not over 100 million Christians.

They are worried about offending liberals, but not conservatives- even though conservatives outnumber liberals in 47 out of 50 states.

They are worried about offending everyone and anyone, other than 62 million Trump voters. We don’t seem to count. Offending us doesn’t concern anyone. It’s time to change that.

It’s time to show our power. It’s time to reward companies who support President Trump, or just shut up and don’t take sides. We’re not asking CEOs to support Trump, or conservatives causes. The point of capitalism to sell to both Republicans and Democrats. Stay out of politics- or risk losing the buying power of 62 million Trump voters.

But it’s high time to punish the “progressive” companies that openly take sides and disrespect our President (and his 62 million supporters).

If CEOs want to show their liberal support, great. Have at it. But from now on, understand you’ll risk losing 62 million customers. Because...