Obama Is the Greatest Republican Salesman in History 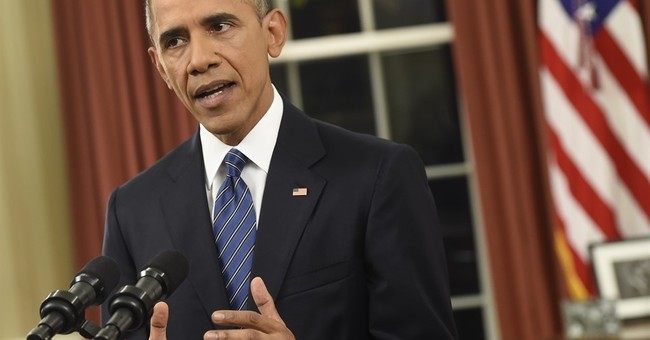 Obama, Hillary and leading Democrats aren’t even attempting to hide or moderate their views anymore. They are out of the closet. It’s the “Full Monty.” Or in this case, “The Full Socialist.”

There’s no hiding it anymore. They are loud, proud and radical left. Democrats can’t even see “center” from their homes anymore. But it appears they can see “Mother Russia.”

Here are 15 key points and policies where national polls prove Obama, Hillary and their socialist cabal are extreme radical left and badly out of step with the America people:

1) Obama's refusal to halt or even pause the importation of Syrian/Muslim Refugees after the Islamic State attack on Paris.

2) Obama's refusal to not only enforce "illegal' immigration laws, but even more extreme - his use of Executive Action to legalize millions, without bothering to get the approval of Congress. Polls show American voters are solidly against Obama.

3) Obama’s refusal to admit “terrorism” is tied to “radical Islam.” He won’t even say the two words in the same sentence. Polls show American voters are solidly against Obama.

4) Obama's refusal to come up with a consistent, well-thought out strategy to combat Islamic State. Polls show American voters are solidly against Obama.

5) Obama’s refusal to admit Obamacare is a disaster that has killed jobs; damaged small business; stunted GDP growth; bankrupted state health insurance exchanges; and is bleeding middle class Americans to death with dramatically higher premiums, deductibles and co-pays. No matter how much the media tries to cover-up, they can’t hide the truth from voters- because the truth is in our monthly healthcare bills. Polls show American voters are solidly against Obamacare.

6) Obama’s refusal to drop his obsession with “climate change” and “global warming” even though polls show a large majority of Americans don’t rate it as important.

7) Obama's refusal to reject the radical “Black Lives Matter” movement and his clear distaste and lack of respect for America’s law enforcement. Polls show American voters are solidly against Obama.

8) Obama's refusal to come up with a realistic budget and any semblance of a plan to solve our current economic misery and malaise- ranging from only part-time job created, to the worst workforce participation rate in modern history, to terrible retail sales, to terrible manufacturing numbers, to the worst GDP numbers in the history of America (seven straight years under 3 percent GDP growth for the first time ever).

9) Obama's refusal to admit that the jobs and inflation numbers released by government are pure theatre and fraud. The people know “the books are cooked.” Just like with Obamacare, the people know what they hear in the media is a total scam because they know there are no decent full-time jobs and everything they buy costs far more than seven years ago.

10) Obama's refusal to admit that "Gun Control" is not the answer to violence on our streets. Americans aren’t stupid. They know that Chicago has the strictest gun laws in the country and the most violence on it’s streets- with as many as 50 shot and 20 killed on some weekends. That could be why each time Obama talks about the need for gun control, Americans go out and buy record quantities of guns.

Polls show American voters solidly against Obama on the topic of guns (and the highest support for the 2nd Amendment in 25 years).

11) Obama's refusal to admit that his foreign policies have failed miserably- including his support for “the Arab Spring”…his helplessness to stop or slow Putin…and his infamous “Red Line in the Sand” threat towards Syria’s Assad regime. Polls show American voters solidly against Obama.

14) Obama's refusal to allow the prosecution of Lois Lerner, or to even punish in any way the illegal actions of IRS employees who clearly chose to target and persecute conservative groups and critics of the President. Forget punishment. The IRS employees involved received BONUSES. Polls show American voters solidly against Obama.

Amazingly, Hillary is not only on board with Obama's agenda, in many instances she wants to go further to the left (with spending, illegal immigration, importation of Syrian refugees, and gun control). These views run clearly counter to the majority of Americans…and yet Democrats no longer care.

Democrats are fooling themselves. This is pure madness. Republican landslides in virtually every race in both November 2014 and just this past November 2015 are signs of the anger and outrage from America's voters (at least the ones who are here legally). It’s only the tip of the iceberg.

In reaction to this indifference, Obama has turned the vast majority of America almost completely red on a local basis. In seven years under President Obama, Democrats have lost an unheard of 900+ state legislature seats, 12 governors, 69 House seats, and 13 Senate seats.

Obama is a great salesman. Unfortunately for Democrats, he’s the greatest Republican salesman in history. Thank you Obama for turning America red!