"If You Like Your City, You Can Keep Your City" 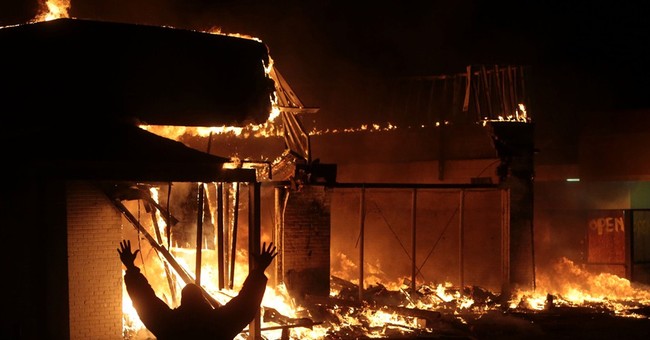 That split screen of President Obama talking while Ferguson burned was the perfect image of the Obama presidency. On one side of the screen, Obama was asking for calm and praising his Attorney General Eric Holder for the work he did to promote peace and calm. On the other side, Ferguson was under attack- being looted and burned. That’s “the money shot”- the iconic image of the Obama presidency.

It was almost as if Obama was saying to Ferguson, “IF YOU LIKE YOUR CITY, YOU CAN KEEP YOUR CITY.”

Obama's Ferguson speech turned out to be as truthful as the Obamacare speech…with the same result: crisis and disaster.

First of all, this grand jury announcement was expected for weeks. We all waited what seemed like an eternity. So what’s the big deal about waiting for a few more hours? Why release this controversial decision at 9 PM EST? Why not wait until 9 AM the next morning?

Everyone knows bad things happen at night, under the cover of darkness. People are calmer at 9 AM than at 9 PM

Secondly, isn’t it government’s job to protect the citizens and taxpayers from something just like this? Isn’t that why Governor Nixon called out the National Guard days ago- just to prevent something just like this from happening? So where was the National Guard? Why weren’t they positioned right in front of the stores of Ferguson to prevent looting, burning and killing? Everyone on the planet knew this was coming. Government knew this was coming. Yet government did nothing to protect the taxpayers.

Let me ask again, “Where was the National Guard that was publicly called up days ago?”

Conservatives like me constantly argue that government is incompetent…wastes our taxes…does nothing for us with our own tax money. Well Ferguson is Exhibit A. The people doing the rioting, looting, burning and shooting don’t pay any taxes. To the contrary, they take money out of the system (welfare, food stamps; court, police and prison costs; free healthcare…and let’s not forget property damage).

On the other hand, business owners and homeowners pay income taxes, business taxes, payroll taxes, property taxes and sales taxes. What do we get in return? Nothing. Not even on nights like this- when everyone knew what was coming. The government couldn't even manage to stop a few rioters and looters in one small city, on one block, on one night, when everyone knew for weeks what was coming.

Keep in mind this is the same government that was warned in advance of threats, yet couldn't protect one small embassy in Benghazi. And even though they watched the attack on the Benghazi Embassy in real time at the "Situation Room" at the White House, they couldn't (or wouldn't) mount a rescue operation.

Mr. Obama doesn't think any of us should own guns. He tells us that government is there to protect us. He says we can depend on government. This all begs the question:

Now that you know how effective government is at protecting the citizens, do you still feel safe without a gun?