A Modern Day, High-Tech Lynching of a Police Officer 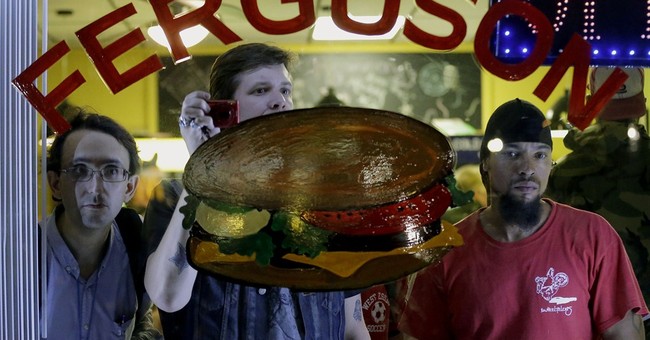 Damn the facts. President Obama and Attorney General Holder are railroading an innocent police officer to fit their narrative of racism in America. The President needs an indictment and conviction to please his last remaining group of supporters - black Americans. Remember polls show that Obama is now considered the worst president since WWII- lower rated than even Nixon or Carter. Yet in the last election Obama received 93 percent of black votes.

That’s precisely why we are witnessing a modern-day, high-tech political and media lynching of an innocent police officer who clearly acted in self defense…if Michael Brown's supporters would actually be willing to look honestly and fairly at the evidence. That’s something that President Obama, Attorney General Holder and various rabble-rousing, race-baiting black leaders appear incapable of doing. This is called sacrificing one police officer's life to placate your last remaining loyal supporters.

If by chance Obama and Holder can’t get an indictment (and my bet is they won’t), it’s a sure thing they’ll charge an innocent man with trumped up civil rights violations.

Before we get to the facts of the case, let’s first examine a few glaring inconsistencies and hypocrisies the size of the state of Texas.

Let’s start with the biggest problem for black Americans- violence in their own communities. Black on black violence is an epidemic in America. In any given week there are 25 dead black Americans lying on the streets of one city- Chicago. In one city- Detroit- police warn outsiders to steer clear of certain neighborhoods because they have lost control of the streets. As Fox News’ Juan Williams pointed out in a recent commentary, more than 90 percent of young black men are killed not by police or white people, but by other black men.

Murder is the #1 cause of death for black males between the ages of 15 and 34. Why does the black community not take action to stop this tragedy? Where is the outrage? Where are the protests?

Isn’t it absurd that one black man (who just committed a robbery) being shot by a white police officer causes a nationwide uproar…while thousands of black males murdered by other blacks every year receives a yawn. Where are the black leaders? Where is our black President?

Just days ago a young male was shot and killed by police in Salt Lake City.

The police officer was black. The unarmed victim was described as “white-hispanic.” But there was no national outrage. There was no violence, looting or burning. Why is it racism if a white officer shoots a black suspect, but just fine if a black officer does? Does the black community only get at white policemen? Isn’t that a case of…racism?

And where is the outrage over black-on-white crime? Race-based hate crime surged in Washington DC last year. Almost all of this increase in violence involved black criminals and white victims. Where was the national outrage? Where are the protests? Where is Obama?

I have a few questions for our President. Why has Obama never said a word about out-of-control black violent crime in America? Why has he never said a word about police officers (whether black or white) gunned down? Why were there more U.S. government dignitaries at Michael Brown’s funeral than Margaret Thatcher’s funeral? Why has Obama made the Michael Brown incident into a national outrage, but he says and does nothing about a hero Marine being held for months in a Mexican prison on trumped up charges? Strange priorities.

Now let’s examine the Michael Brown case itself. I ask my fellow Americans to do something that President Obama, Attorney General Holder, Jesse Jackson, Al Sharpton, the media and those crowds in Ferguson, Missouri don’t want to do…examine the facts as we now know them.

Fact: The “victim” Michael Brown had just robbed a store. Not just any robbery. This was a “strong arm robbery” involving thug-like behavior, all caught on video

Fact: Initial blood tests confirmed he had drugs in his system.

Fact: The use of force is justified if you believe your life is in danger or you are facing a person intent on doing you bodily harm.

Brown was a monster of a man, 6’4” 290 pounds. What would you do if a giant thug came charging at you in an attempt to run you over, knock you down and take your gun? Wouldn’t you believe your life was in danger if the man charging you had already punched you in the face and, as x-rays now prove, broken your eye socket?

Fact: There are now a dozen witnesses who corroborate Wilson’s account of the story.

The only witness claiming that Brown was shot in cold blood, with his hands up, was his criminal cohort Dorian Johnson- who has an outstanding warrant for theft and was arrested in the past for lying to police. You mean rioting, burning, looting, national outrage and condemnation was all based on a lying criminal?

Was this Michael Brown’s first run-in with the law? Brown’s supporter’s claim he had no “adult criminal record.” Well he just turned 18 only months ago. But did he have a criminal record as a minor? Investigative reporter Charles Johnson has filed a lawsuit to force Missouri to open Brown’s juvenile records. Johnson has been told by police that Brown had a criminal record, but it’s been kept from the public. Why? Does it ruin Obama and Holder’s narrative?

The narrative that Officer Wilson did not know Michael Brown had just robbed the store is unimportant. What is important is that Michael Brown knew. Why? Because the criminal fears being caught. He assumes the cop is pulling him over because he knows. The criminal is then emboldened to take action to escape the police officer.

The facts so far don’t bode well for Michael Brown. This appears to be an over-zealous reaction to a police shooting that was never based on racism. A police officer was defending his life from a hulking, giant thug who had already punched him, broken his eye socket and tried to take his gun away.

What would you have done? Let a 290 pound thug knock you down, wrestle away your gun and kill you? This police officer was just doing his job. All he wanted was to go home safely to his wife and children.

But none of that has stopped Brown’s supporters from chanting for the DEATH of Officer Darren Wilson.

I, for one, stand with Officer Wilson. I will raise money for his defense if needed. I will organize protests against any attempt to prosecute this police officer, either for murder or trumped-up, politicized civil rights charges.

Have no doubt, Officer Wilson’s life and freedom are in danger. It will take the silent majority of taxpaying, law-abiding American citizens to stand together to stop an innocent hero police officer from being railroaded to satisfy political correctness and the racist agenda of an unpopular, embittered president.

The real irony of this case is that Eric Holder seems intent on appointing a special prosecutor to railroad Officer Wilson, when the special prosecutor should be appointed to investigate the serious crimes of President Obama and Attorney General Holder.