Walter E. Williams
|
Posted: Oct 16, 2019 12:01 AM
Share   Tweet
The opinions expressed by columnists are their own and do not necessarily represent the views of Townhall.com. 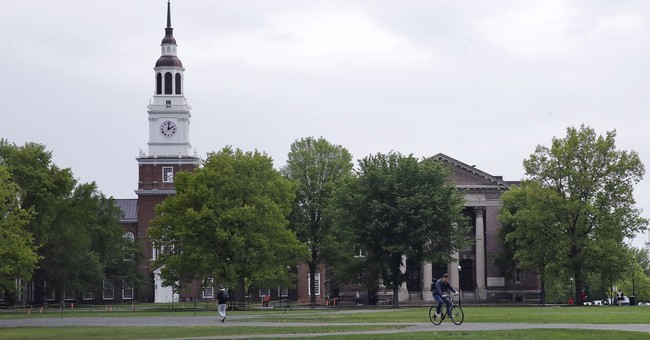 If you need an accurate update on some of the madness at the nation's institutions of higher learning, check out Minding the Campus, a nonprofit independent organization. John Leo, its editor in chief, says that the organization's prime mission is dedicated to the revival of intellectual pluralism and the best traditions of liberal education at America's colleges and universities. Leo's most recent compilation of campus madness leaves one nearly breathless.

In a USA Today op-ed, Emily Walton, a sociology professor at Dartmouth University, said that all college students should take a mandatory course on black history and white privilege. She says that by taking her class, white students "come to understand that being a good person does not make them innocent but rather they, too, are implicated in a system of racial dominance." Walton adds, "After spending their young lives in a condition of 'white blindness,' that is, the inability to see their own racial privilege, they begin to awaken to the notion that racism has systematically kept others down while benefiting them and other white people." This is inculcating guilt based on skin color. These young white kids had nothing to do with slavery, Jim Crow or other horrible racial discriminatory acts. If one believes in individual responsibility, he should find the indoctrination by Walton offensive. To top it off, she equates the meritocratic system of hard work with white discrimination against minorities.

If you thought integration was in, check out the University of Nevada. Based on a report in the College Fix, John Leo describes how integration on that campus is actively discouraged -- and at taxpayer expense. The university provides separate dorms for different identities including Howell Town for black students, Stonewall Suites for LGBTQ students, the women-only housing of Tonopah community, the Healthy Living Floor for tofu and kale lovers and study-intensive floors for those who want to graduate.

According to a New York Post report, New York City school administrators have been taught that pillars of Western Civilization such as objectivity, individualism and belief in the written word all are examples of white supremacy. All school principals, district office administrators and superintendent teams were required to attend the anti-white supremacy training put on by the city Department of Education's Office of Equity and Access. They learn that a belief in an "ultimate truth" (objectivity) leads to a dismissal of "alternate viewpoints or emotions" as "bad" and that an emphasis on the written word overlooks the "ability to relate to others" and leads to "teaching that there is only 'one right way' to do something." Administrators learn that other "hallmarks" of white supremacy include a "sense of urgency," "quantity over quality" and "perfectionism." Richard Carranza, New York City school superintendent, says the workshops are just about "what are our biases and how we work with them."

Michael Bloomberg, former New York City mayor, says that political rage and increasingly polarized discourse are endangering our nation. Americans used to move forward productively after elections regardless of which side won. Now, we seem paralyzed by absolute schism and intolerance. Bloomberg pointed to colleges as a prime example of a rising level of intolerance for different ideas and free speech. Steven Gerrard, a professor at Williams College in Massachusetts, serves as an example of campus intolerance. Students declared Gerrard "an enemy of the people" after he suggested that Williams College join other schools in signing onto what's called the Chicago Principles. The statement, published by the Committee of Freedom of Expression at the University of Chicago, calls for free speech to be central to college and university culture. Williams college students said free speech is a part of a right-wing agenda as a "cover for racism, xenophobia, sexism, anti-Semitism, homophobia, transphobia, ableism and classism." Bloomberg pointed out that fewer than 70 of America's 4,000 colleges and universities have endorsed or adopted the Chicago statement.

State governors and legislators can learn something from their Alaskan counterparts, who slashed public spending on the University of Alaska by 41%. There's nothing better than the sounds of pocketbooks snapping shut to bring a bit of sanity to college administrators.