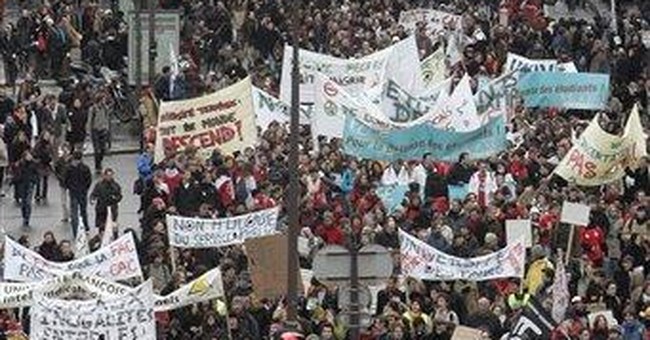 Soon college students will come home and present parents with their grades. To avoid delusion, parents should do some serious discounting because of rampant grade inflation. If grade inflation continues, a college bachelor's degree will have just as much credibility as a high school diploma.

Writing for the National Association of Scholars, Professor Thomas C. Reeves documents what is no less than academic fraud in his article "The Happy Classroom: Grade Inflation Works." From 1991 to 2007, in public institutions, the average grade point average (GPA) rose, on a four-point scale, from 2.93 to 3.11. In private schools, the average GPA climbed from 3.09 to 3.30. Put within a historical perspective, in the 1930s, the average GPA was 2.35 (about a C-plus); whereby now it's a B-plus.

Academic fraud is rife at many of the nation's most prestigious and costliest universities. At Brown University, two-thirds of all letter grades given are A's. At Harvard, 50 percent of all grades were either A or A- (up from 22 percent in 1966); 91 percent of seniors graduated with honors. The Boston Globe called Harvard's grading practices "the laughing stock of the Ivy League." Eighty percent of the grades given at the University of Illinois are A's and B's. Fifty percent of students at Columbia University are on the Dean's list. At Stanford University, where F grades used to be banned, only 6 percent of student grades were as low as a C.

Some college administrators will tell us that the higher grades merely reflect higher-quality students. Balderdash! SAT scores have been in decline for four decades and at least a third of entering freshmen must enroll in a remedial course either in math, writing or reading, which indicates academic fraud at the high school level. A recent survey of more than 30,000 first-year students revealed that nearly half spent more hours drinking than study. Another survey found that a third of students expected B's just for attending class, and 40 percent said they deserved a B for completing the assigned reading.

Last year, the Delaware-based Intercollegiate Studies Institute (ISI) published results of their national survey titled "Our Fading Heritage: Americans Fail a Basic Test on Their History and Institutions." The survey questions were not rocket science. Only 21 percent of survey respondents knew that the phrase "government of the people, by the people, for the people" comes from President Abraham Lincoln's Gettysburg Address. Almost 40 percent incorrectly believe the Constitution gives the president the power to declare war. Only 27 percent knew that the Bill of Rights expressly prohibits establishing an official religion for the United States. Remarkably, close to 25 percent of Americans believe that Congress shares its foreign policy powers with the United Nations. Other questions asked included: "Who is the commander-in-chief of the U S. military?" "Name two countries that were our enemies during World War II." "Under our Constitution, some powers belong to the federal government. What is one power of the federal government?" Of the 2,508 nationwide sample of Americans taking ISI's civic literacy test, 71 percent failed; the average score on the test was 49 percent.

Possessing a college degree often does not mean much in terms of basic skills. According to a 2006 Pew Charitable Trusts study, 50 percent of college seniors failed a test that required them to interpret a table about exercise and blood pressure, understand the arguments of newspaper editorials, and compare credit card offers. About 20 percent of college seniors did not have the quantitative skills to estimate if their car had enough gas to get to the gas station. According a recent National Assessment of Adult Literacy, the percentage of college graduates proficient in prose literacy has declined from 40 percent to 31 percent within the past decade. Employers report that many college graduates lack the basic skills of critical thinking, writing and problem-solving.

The bottom line: To approach truth in grading, parents and employers should lower the average student's grade by one letter, and interpret a C grade as an F.