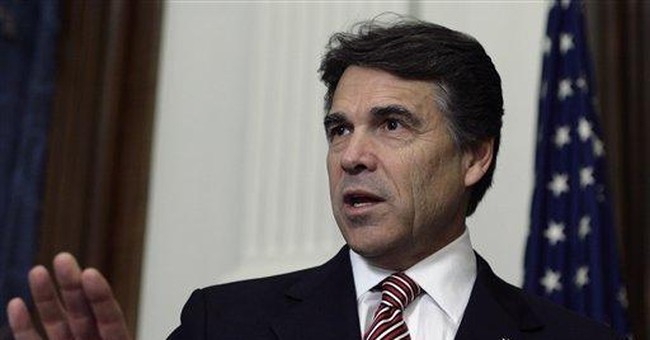 Texas Gov. Rick Perry rattled cages when he suggested that Texans might at some point become so disgusted with Washington's gross violation of the U.S. Constitution that they would want to secede from the union. Political hustlers, their media allies and others, who have little understanding, are calling his remarks treasonous. Let's look at it.

When New York delegates met on July 26, 1788, their ratification document read, "That the Powers of Government may be resumed by the People, whensoever it shall become necessary to their Happiness; that every Power, Jurisdiction and right which is not by the said Constitution clearly delegated to the Congress of the United States, or the departments of the government thereof, remains to the People of the several States, or to their respective State Governments to whom they may have granted the same."

On May 29, 1790, the Rhode Island delegates made a similar claim in their ratification document. "That the powers of government may be resumed by the people, whensoever it shall become necessary to their happiness: That the rights of the States respectively to nominate and appoint all State Officers, and every other power, jurisdiction and right, which is not by the said constitution clearly delegated to the Congress of the United States or to the departments of government thereof, remain to the people of the several states, or their respective State Governments to whom they may have granted the same."

On June 26, 1788, Virginia's elected delegates met to ratify the Constitution. In their ratification document, they said, "The People of Virginia declare and make known that the powers granted under the Constitution being derived from the People of the United States may be resumed by them whensoever the same shall be perverted to their injury or oppression and that every power not granted thereby remains with them and at their will."

As demonstrated by the ratification documents of New York, Rhode Island and Virginia, they made it explicit that if the federal government perverted the delegated rights, they had the right to resume those rights. In fact, when the Union was being formed, where the states created the federal government, every state thought they had a right to secede otherwise there would not have been a Union.

Perry is right when he says that there is no reason for Texas to secede. There are indeed intermediate actions short of secession that states can take. Thomas Jefferson said, "Whensoever the General Government assumes undelegated powers, its acts are unauthoritative, void, and of no force."

That suggests that one response to federal encroachment is for state governments to declare federal laws that have no constitutional authority null and void and refuse to enforce them.

While the U.S. Constitution does not provide a specific provision for nullification, the case for nullification is found in the nature of compacts and agreements. Our Constitution represents a compact between the states and the federal government. As with any compact, one party does not have a monopoly over its interpretation, nor can one party change it without the consent of the other. Additionally, no one has a moral obligation to obey unconstitutional laws. That's not to say there is not a compelling case for obedience of unconstitutional laws. That compelling case is the brute force of the federal government to coerce obedience, possibly going as far as using its military might to lay waste to a disobedient state and its peoples.

Finally, here's my secession question for you. Some Americans accept and have respect for the Tenth Amendment, which reads, "The powers not delegated to the United States by the Constitution, nor prohibited by it to the States, are reserved to the States respectively, or to the people."

Other Americans, the majority I fear, say to hell with the Tenth Amendment limits on the federal government. Which is a more peaceful solution: one group of Americans seeking to impose their vision on others or simply parting company?