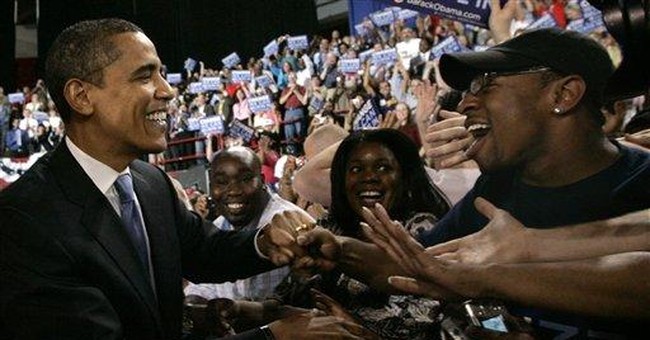 Douglass' students are four to five years below grade level. Most of its ninth-graders read at the third-, fourth- or fifth-grade levels. In 2006, only 24 percent of its students tested proficient in reading, in math just 11 percent, and that's an improvement over previous years. Only one student managed to score above 1,000 on the SAT and another student scored 440 out of 1,600. You get 400 points for just writing in your name. Out of its 1,100 students, 200 to 300 are absent each day. Many of those who do show up don't do so on time; they roam the hallways and leave the school during the day. Only one-half of the school's 500 incoming freshmen ninth-graders return for their sophomore year and far fewer remain for graduation

Sixty-six percent of the teachers are uncertified. Even if there were no certified teacher shortage, I doubt whether many teachers with attractive alternatives would want to teach at the school. Douglass High School is not a place for teachers with high expectations for their students. English teacher Mr. McDermott resigned in the middle of the school year saying, "Teaching becomes secondary, and discipline is the main thing that goes on. I don't feel like I'm making a difference anymore."

Cameras followed then-principal Isabelle Grant on her visit to the home of a chronically absent student. The student who reads at the fifth- or sixth-grade level is promised that if she attends school regularly she'll be promoted to the 11th grade. It is impossible to eliminate such a reading deficit in a semester. Teachers are pressured into passing failing students. The documentary showed that within a few days of graduation time the school went from having 138 eligible graduates to 200. Promoting and graduating students who haven't made the grade is nothing short of academic fraud.

Douglass High School teachers and staff appeared to be concerned and caring people, but the poor quality educational outcomes demonstrate that concern and caring is not enough. The virtually empty classrooms, filmed on back-to-school night, suggested little parental interest in their children's education. School day behavior demonstrated little student interest. Some students spent class time laughing, joking and tussling with one another. Others had their heads lying on their desks or appeared uninterested in the teacher's discussion. Many of those engaged in student-teacher exchange on academic topics showed very limited reasoning ability.

Frederick Douglass was founded in 1883 as the Colored High and Training School before it was renamed. It is one of the nation's oldest historically black high schools. It was a draw for Baltimore's brightest black students. Success stories among its alumni include Thurgood Marshall, Cab Calloway, as well as several judges, congressmen and civil rights leaders. I guarantee you that if Douglass High student test scores of that earlier era were available, they wouldn't show today's achievement gap. Also, a 1940s or '50s Douglass High graduate would find no comparison between student behavior during their school years and that shown in the documentary.

Politicians and the teaching establishment say more money, smaller classes and newer buildings are necessary for black academic excellence. At Frederick Douglass' founding, it didn't have the resources available today. If blacks can achieve at a time when there was far greater poverty, gross discrimination and fewer opportunities, what says blacks cannot achieve today? Whether we want to own up to it or not, the welfare state has done what Jim Crow, gross discrimination and poverty could not have done. It has contributed to the breakdown of the black family structure and has helped establish a set of values alien to traditional values of high moral standards, hard work and achievement.