Vijay Jayaraj
|
Posted: Jan 30, 2019 1:17 PM
Share   Tweet
The opinions expressed by columnists are their own and do not necessarily represent the views of Townhall.com. 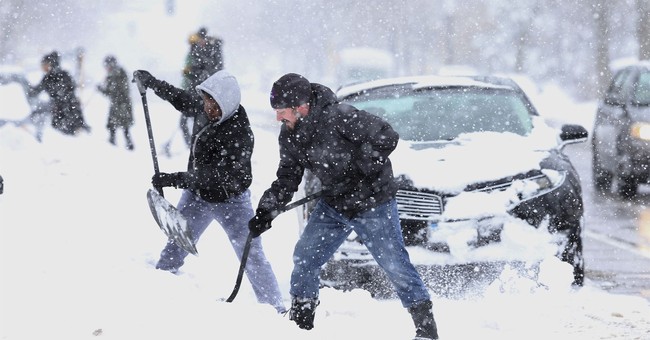 America’s Midwest is freezing. Mainstream media outlets had no option but to inform readers of the heavy snow and dangerous low temperatures.

Scientific American called the current cooling “life-threatening.” CNN reported the “Coldest air in a generation.” Those headlines were not hype.

Today, nearly 40 percent of Americans woke up to wind chill warnings or advisories on Wednesday. Over the next few days, 72 percent of the continental US population will experience below freezing temperatures.

Snowstorms and cold winds blasted through the Midwest on Tuesday, causing widespread chaos. Some 1,700 flights were cancelled nationwide as of Wednesday morning. Many roads in the Midwest remained dangerous to drive. Postal service was disrupted in many states.

Chicago was hit hard. The National Weather Service issued a warning for Wednesday, asking citizens to exert utmost caution as temperatures remained in negative double digits, with wind chills making them feel 20 to 30 degrees colder yet. Exposed skin could experience frostbite in as little as two or three minutes.

Schools remained closed in Chicago, and Amtrak cancelled all trains to and from Chicago for Wednesday. Conditions became so dangerous that Illinois Governor J.B. Pritzker issued a disaster proclamation.

The official release said, “The heart of the Arctic cold has arrived.” Daily record lows for Chicago and Rockford, IL were broken Wednesday, smashing the previous lows for 30th January set in 1966.

Across the Atlantic, Britain also experienced severe cold from the Arctic air outbreak Wednesday. Schools in many parts were shut, many roads were unusable, and forecasters warned of more snow and ice as temperatures plunged across the Isles.

But isn’t global warming supposed to cause an increase in average temperature? Aren’t we supposed to experience milder winters? That is what we were told.

In the previous decade, climate alarmists made bold claims such as “snow will be a thing of the past” and the “Arctic will be completely gone.” But, time and again, their claims have failed to match reality.

Pressed by the need to sustain their narrative, they began rephrasing terminologies. Global warming became climate change. Any cold phase is coined a “weather event,” a phenomenon unassociated with long-term warming. Now, almost all climate doomsday theorists claim that severe winters do not disprove global warming.

The alarmist/doomsday logic is simple: When it’s warm, it’s because of “global warming”; when it’s cold, it’s just “weather.”

As a climate scientist myself, I find it embarrassing to be associated with such inconsistency.

What’s wrong with it?

While the current freeze is a “weather event,” it is also a part of the ongoing long-term climate events, namely the “global warming hiatus” and the “solar minimum.”

The earth has been on a 20-year global warming hiatus. Global temperatures failed to increase at the 1970–1999 rate.

One of the major reasons for this hiatus is the reduction in sunspot activity. This is referred to as a “solar minimum,” a factor that influences the temperature levels on earth significantly more than any other. The “Maunder minimum” brought on the Little Ice Age of the 16th century.

The severe, long winter of 2017–2018and the current historic cooling may be part of a global climate cool down—or they may not be. It is too early to conclude. Climatologists are waiting to see how the next sunspot cycle (solar cycle) will play out.

It is important to remember that the current cold phase (2018–2019) contradicts the climate doomsday theory, which had originally predicted milder winters. It also contrasts with claims of global temperatures rising to unprecedented levels.

To summarize the current climatic events, we need to ask two questions:

2. Are we beginning to experience global cooling?

If we were ever to be doomed by climate change, it won’t be because of global warming but because of global cooling. Cold is much more dangerous than heat. One example among many: cold snaps kill ten times as many people per day as heat waves.

Fighting global warming by substituting diffuse, low-density, high-cost, low-reliability wind and solar for concentrated, high-density, low-cost, high-reliability fossil fuels won’t save us from warming, but it will make us unprepared for cooling if it comes.