Hot Lies in a Cold Winter

Vijay Jayaraj
|
Posted: Nov 14, 2017 12:01 AM
Share   Tweet
The opinions expressed by columnists are their own and do not necessarily represent the views of Townhall.com. 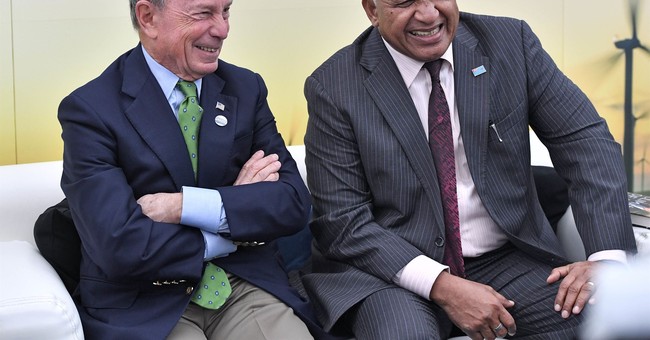 Predictably, delegates to the climate summit in Bonn are crying out for greater urgency in the world’s fight for survival against dangerous manmade global warming.

Frank Bainimarama, Prime Minister of Fiji and President of UNFCCC COP 23 in Bonn, called “the international community to decisive action to address the underlying causes of global climate change,” “embrace the Paris Agreement’s more ambitious target of limiting warming to 1.5 degrees Celsius and achieving net-zero greenhouse gas emissions by 2050 at the latest,” “address the need to finance adaptation and to increase private-sector support for adaptation and mitigation actions, including insurance,” and “join … in a grand coalition to save our Earth and the people and other living things that call it home.”

But it behooves us to take a deep breath and ask whether there’s really good reason for all this.

In September, the global oceans recorded a significant drop in sea surface temperature. This remained completely ignored by media houses that were busy with concealing the 20-year global warming hiatus.

What implications do falling temperature levels have on the current hysteria surrounding climate change?

I had an opportunity to work with global sea surface temperature (SST) datasets during my research work at the University of British Columbia, Canada. My work involved how the change in ocean temperature, if any, influenced ocean life.

One reliable dataset for evaluating SST is the HadSST3 data from UK Met Office Hadley Centre. HadSST3 is a monthly global field of SST from 1850 to date.

The global SST spiked in 2016 due to the El Nino, but there was no significant increase in temperature. This year, it showed a declining trend and reached 2015 levels by September.

In any case, the current global SST is not any different from those in the interglacial period, thus confirming various other temperature reconstruction studies that show that the modern warm period is not unique.

This decline in temperatures is not exclusive to the sea surface. Land surface temperatures have recorded a similar trend.

HadCRUT4.5—one of the more recent versions of HadCRUT4—indicated a drop of 0.17 degree Celsius from August to September and a massive drop from the El Nino peak temperatures of 2016.

HadCRUT4.5 (a combination of HadSST3 and CRUTEM4.6) data is a collaborative product of Hadley Centre and the Climatic Research Unit (CRU) at the University of East Anglia, UK—where I did my Master’s in Environmental Sciences under the very scientists who work with these data sets.

The CRU is famous for the Climategate controversy—a scandal where scientists from a number of universities were accused of manipulating temperature data in order to strengthen their case for global warming (among other misdeeds).

The sobering fact is that those scientists and universities involved in the Climategate scandal continue to hold key positions in the global climate science community, thereby controlling key climate research outputs and propagating climate hysteria in our mainstream media.

In spite of this, the data in the past two decades revealed a period of no significant warming, prompting the scientists within the alarmist community to acknowledge the same.

It would be fair to state that the global land surface temperatures in September this year were similar to the levels in 1998. Between 1998 and 2017, the HadCRUT4 temperatures revealed that there has been no significant warming.

SST and land surface temperatures thus prove that the temperature trends do not cohere with the carbon dioxide levels in the atmosphere—the concentration of which continued to increase.

However, the scientists in the alarmist camp continue to spread climate lies. They do this by constant temperature data modifications to suit their narrative and claiming that these are short-term trends within a much larger warming trend.

But hundreds of temperature reconstructions from the ice-cores and tree rings reveal that there has been no dangerous warming for the past two-thousand years.

Independent research papers published in peer-reviewed academic journals prove that the modern warm period of the 20th century is not dangerous. The Roman Warm Period and the Medieval Warm Period—both of which occurred during the past two millennia—were similar to the current Modern Warm Period.

The case for dangerous climate change gets completely decimated when we consider reconstructed temperatures beyond the past two millennia, with time periods in the past displaying drastically higher temperatures and higher carbon dioxide concentrations.

The hot lies will not keep us warm during the cold phases. Quite contrary to the current hysteria, humanity has suffered only when the earth has gone through cold phases—like the mini ice age of the 16th century.

Climate change hysteria will eventually lead us into an era of scientific hypocrisy and energy darkness if our global academic and political institutions continue to ignore the implications of actual temperature data.