Victor Davis Hanson
|
Posted: Mar 30, 2017 12:00 AM
Share   Tweet
The opinions expressed by columnists are their own and do not necessarily represent the views of Townhall.com. 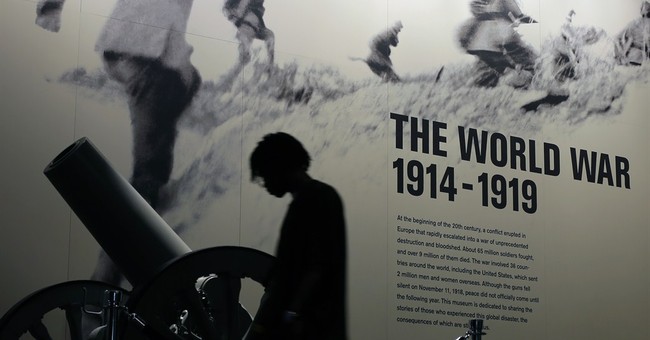 One hundred years ago, on April 6, 1917, the United States entered World War I. The ongoing conflict ended just 19 months later with an Allied victory.

The United States did not win the war alone, given the far earlier and greater sacrifices of Great Britain, France, Italy and czarist Russia.

But America's late arrival, with some 2 million doughboys who landed in France less than three years after the start of the war, saved the teetering Allied cause. By late 1917, Germany had knocked Russia out of the war and seemed likely to swarm the sole Western front and finish off the exhausted British and French armies.

On this centennial of America's entry into the war, debate still rages over the cause and results of World War I in a way not true of the far more lethal World War II (an estimated 60 million dead) just two decades later.

Until World War II, the conflict was initially known as the Great War, on the naive premise that the "war to end all wars" would never have to be repeated. But World War I did not solve problems as much as it led to even greater ones.

Unfortunately, World War I ended with an armistice -- at the 11th hour of the 11th day of the 11th month of 1918 -- and not with an unconditional surrender of the defeated. Although Germany and Austria-Hungary clearly lost the war, their countries were not occupied and monitored, as would be true after World War II.

The 1919 Treaty of Versailles that was supposed to bring peace is often blamed for being too harsh on the losers. But it was more complicated than that. The settlement of Versailles combined the very worst of both worlds: blaming the defeated side, but without any means of ensuring that the humiliated losers would not rearm and try their luck again.

In response, the losing Germans often blamed back stabbers for their defeat and first interpreted such utopianism as Allied guilt -- and later as weakness. Under Adolf Hitler, Germany rearmed and began absorbing neighboring borderlands eager to replay the verdict of World War I.

The United States was depressed that World War I seemed to have brought no lasting peace. It returned to its former isolationism during the depression years of the 1930s, disarmed, and was determined to never again become involved in Europe's nihilistic wars.

Yet that very disengagement weakened the European democracies' common front. Both European appeasement and American isolationism only encouraged the new Axis Powers to become even more determined to reverse the outcome of World War I.

World War I broke out in 1914 at an age when new offensive technology -- machine guns, airplanes, poison gas, mass-produced artillery shrapnel shells, submarines -- had vastly outpaced the arts of defense and medical care. It proved far easier to kill than to protect soldiers. And it was the first major war that was truly global, spreading beyond Europe to areas of the Middle East and Africa.

Mass deaths -- especially during the great flu outbreak of 1918 -- in the trenches from the Swiss border to the North Sea over four years of fighting nearly destroyed Europe. The war finished off the German, Russian, Ottoman and Austro-Hungarian empires.

What can Americans learn 100 years later from the belated entry of the United States into World War I, and from the war's beginning, conduct and aftermath?

Seemingly isolated incidents -- such as the assassination of Austria's Archduke Ferdinand in 1914 -- can lead to nearly 20 million dead.

Isolationism and disarmament only encourage aggressors to do something stupid. Military power and deterrence persuade them not to try.

Had the United States been fully armed in 1914 (or again in 1939) and ready to help its allies, Germany might not have invaded Western Europe, or at least not have achieved such initial successes.

Wars -- easy to start, hard to end -- usually last far beyond what the original belligerents imagined.

Stalemate at the front ensures horrendous casualties. The Allies had no strategic plans -- or ability -- to attack German industries or invade German cities. And Germany and Austria could not reach the heart of Allied power in London, Paris or New York.

Defeat and occupation force an enemy to cease its aggression. Armistices without a definite result only lead to postponements -- and eventually more war.

World War I's terrible irony is that today its horrible carnage seems even more senseless than the far greater death toll of World War II, which ended quite differently and did not lead to another world war -- at least so far.