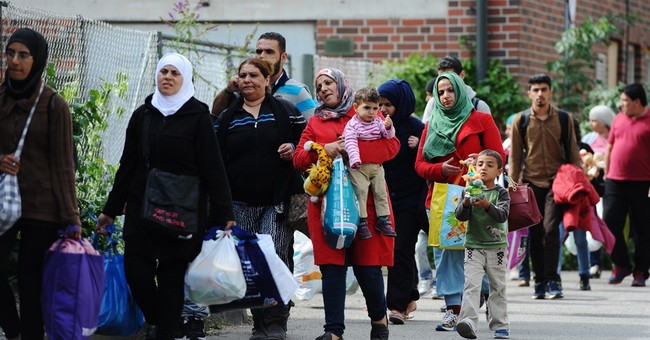 There is a tragic monotony to the latest massive human migration, this one involving Syrians fleeing their war-torn country.

Whether the migrants are from Mexico, the Islamic world or elsewhere, it is always the same: Migrants flock to the West.

Mexicans who elect to leave their country do not hop trains to Guatemala. Fleeing Libyans do not head for the Congo. And Syrians do not go to Russia or China.

Migrants -- many of them young men -- come in such numbers that Western immigration laws are often rendered null and void. Western nations tend to apply their exacting immigration laws only to the much smaller number of immigrants who obey the law.

Sometimes the exoduses are due to endemic poverty, usually brought on by the utter failure of non-Western governments to provide jobs, security and basic social services. Sometimes tribal, religious or drug wars cause the exoduses.

Yet neither the Latin American nor the Islamic world analyzes why millions of their own are fleeing to cultures that are usually criticized -- other than an occasional half-hearted whine about the legacy of imperialism, colonialism and a potpourri of other historical grievances.

Nor does the deer-in-the-headlights American or European host dare to remind newcomers that its uniquely Western menu -- free-market capitalism, private property, a free press, meritocracy, consensual government, religious tolerance, equality between the sexes, and individual freedom -- draws in people, while the antitheses repel them.

The mentalities of both the Western hosts and the non-Western migrants have become predictable.

Many ordinary middle-class Westerners oppose massive influxes of immigrants. These citizens do not like seeing laws rendered null and void. They fear that their schools, health facilities, legal systems and social services will be overwhelmed and left unable to effectively serve their own middle classes and poor.

The masses in the West have learned such caution from experience. The sudden appearance of huge numbers of immigrants -- when coupled with poverty, lack of language facility and little education -- for decades afterwards has impeded easy integration, assimilation and intermarriage within Western society.

As a result, a divisive, salad-bowl multicultural separatism often arises.

Given the challenges of facing strange customs, traditions and languages, guests naturally find it difficult to achieve rapid parity with hosts. It is soon forgotten in the first generation that being in the underclass in the West was once thought better than the alternative back home. That paradox is soon forgotten by the often disgruntled -- and less desperate -- children of migrants.

Millions of immigrants to the West soon sense that their own lack of parity and sheer numbers can translate into a powerful political constituency -- all the more so if it stays angry, unassimilated and occasionally replenished by new waves of arrivals.

Western elites in politics, journalism, academia, religion and the arts snipe at their own supposedly illiberal majorities. How dare these cruel hearts question the wisdom of accepting legions of anonymous newcomers!

Yet too many elites unfortunately are poseurs. These privileged Westerners assume that the real consequences of unchecked migration should always fall on others who are less sophisticated and who lack the elites' capital, education and influence to find everyday exemption from the real-life consequences of their own idealism.

Should Harvard or Oxford open their ample campuses to migrant tent cities, should the wealthy in Malibu and Monaco allow their beaches to become refugee campgrounds, should the Vatican turn its vast plaza into beds and soup kitchens for thousands, then a member of the elite might not be so jaded about the vast abyss between what is lectured and what is actually done.

Non-Western countries are even more two-faced about immigration. Saudi Arabia, for example, has not used its trillions of petrodollars to take in fellow Muslims from neighboring countries. But it has offered to build 200 mosques in Germany. The Saudis logically assume that unassimilated young male Muslim immigrants in Europe will be ripe for the Saudis' own brand of extremist Islamic chauvinism and resistance to Western modernism.

In the case of Mexico, it expects that the United States would never treat immigrants in the manner that Mexico deals with migrants.

Not long ago, the Mexican government printed comic-book-style manuals on how to enter the U.S. illegally. Apparently, Mexico does not want to retain its own citizens. It assumes that they cannot read and are in need of pictographic instruction. And it advises them to break its neighbor's immigration laws. How else to ensure that an estimated $30 billion in remittances each year are sent home to Mexico from its expatriates?

We all lie to ourselves about immigration. The world over seems to want what often-complacent, affluent Westerners take for granted. But no one dares to say why this is so, or why some are driving out -- and others are drawing in -- millions on the move.