We Are All Californians Now 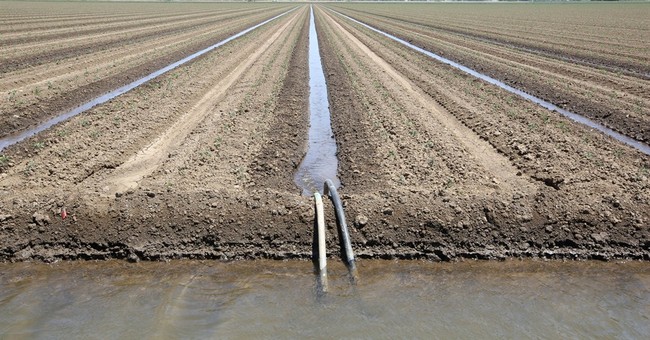 California keeps reminding us what has gone astray with America in recent years.

The state is in the midst of a crippling four-year-old drought. Yet California has built almost no major northern or central mountain reservoirs since the New Melones Dam of 1979. That added nearly 3 million acre-feet to the state's storage reserves -- a critical project that was almost canceled by endless environmental lawsuits and protests.

Although California has almost doubled in population since the dam's construction, its politicians apparently decided that completing more northern and Sierra Nevada water projects was passé. So the parched state now prays for rain and snow rather than building reservoirs to ensure that the next drought won't shut down the state.

Curiously, once infrastructure projects such as the New Melones Dam are finished, few seem to complain about the life-saving water they provide the public in times of existential drought. California has taught the nation its unique hypocrisy. We have stopped the Keystone pipeline for now, but if it gets built eventually, few consumers will complain that it transfers oil at a cheap cost and with greater safety.

California has also schooled the nation on mutually exclusively goals. Its lax immigration policies have made for a rapidly expanding population, and yet it expects a sophisticated infrastructure that ensures plentiful, clean water -- and dreams of a pristine, green, 19th century paradise in a depopulated state.

California's major north-south highway laterals -- the 99, 101 and I-5 "freeways" -- often descend into deadly traffic quagmires. They were designed for a state of less than 20 million people, not one of more than 40 million. Recent national surveys have rated the state's road system as nearly last in the nation.

Most forget that California once all but invented the modern idea of a freeway. But instead of first ensuring motorists safe three-lane freeways, the state is embarking on a $68 billion high-speed rail project.

Californians excel at these postmodern solutions even as they ignore premodern problems. What advantage is providing free iPads for California students if their basic reading and analytical skills are declining to below pre-Internet levels? California is busy mandating transgendered restrooms but is lax in guaranteeing that there will be water in their sinks and toilets.

In good California style, Houston-based NASA talks grandly about its new 21st century space agendas, forgetting that it cannot even send its present astronauts into space on an American rocket. Just because a prior generation built the powerful and sophisticated Saturn rockets does not mean that its more sophisticated children can send Americans into space without Russian help.

Government agencies such as the IRS, VA, GSA and NSA are bigger, richer and more self-promoting than ever before. But their huge budgets hardly ensure that they can fairly collect taxes, humanely tend to the needs of veterans, professionally monitor government property, or properly collect and distill intelligence.

The once-vaunted California State University system now struggles with incoming students who are ill-prepared for college courses. More than a third do not meet English or math test entry requirements for college work and need remedial courses, which in turn reduces the availability of advanced classes and resources from the traditional university curricula.

Much of the crisis originates from poor preparation in grade schools and high schools, combined with huge influxes of non-English-speaking immigrants. In the past, the melting pot of English emersion, assimilation, integration and intermarriage had best helped immigrants quickly reach parity with the native population, but that old model has since been rejected.

The United States likewise has all but ended enforcement of its immigration laws -- as if the idea of open borders and cultural diversity are proper objectives without preplanning for the ensuing education, housing, transportation, health and legal challenges. Praising "diversity" in the abstract proves to be of little value unless in the concrete people are willing to open their neighborhoods and schools to mentor the millions of impoverished newcomers in their midst.

California taught the nation that taxes can skyrocket -- the state has the highest basket of income, sales and gasoline taxes in the nation -- even as infrastructure, government services and schools erode. It established the national precedent of opposing new infrastructure projects and then enjoying them once the planners and builders who were criticized finished them. California equated a Silicon Valley smartphone in the hand with knowledge in the head -- and the nation at large soon produced the most electronically wired and least knowledgeable generation in memory.

We are all Californians now.