Voting 'No' on Obama's Immigration Policies 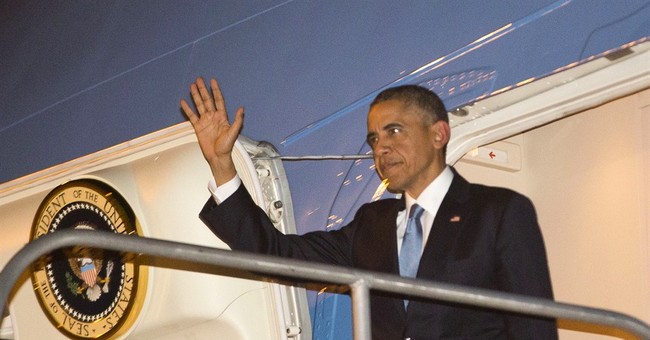 Trending
Everyone finds a lesson in the Republican midterm tsunami.

One message was that so-called comprehensive immigration reform and broad amnesty have little national public support. Polls have long shown that, but so do last week's election results.

Candidates in swing states who promised amnesties got no edge from such opportunistic posturing.

Candidates who pandered to identity groups and played the ethnic card lost in most cases.

In reaction, President Obama sulked, threatening to quickly push through an unpopular amnesty by executive order. Obama apparently knows that he enjoys neither public nor congressional support for his planned executive fiat.

In an increasingly multiracial society, voters -- including many Mexican Americans -- see mostly illogic, hypocrisy and chaos in the present relaxed immigration policy of the partisan-minded Obama administration. They grow weary of identity politics that privilege some immigrant groups over others based on no definable, much less consistent, logic.

Voters assume that liberal-elite advocates of open borders who mock finishing the border fence count on the fences around their own estates -- whether Hollywood grandees, the former mayor of Los Angeles or the president of the United States.

They understand that quick assimilation and melting-pot integration -- made possible only by measured, diverse and legal immigration -- are not the goals of either ethnic lobbyists or Democratic Party activists.
CARTOONS | AF Branco
View Cartoon

Were immigrants from Mexico or Central America soon to vote in unpredictable patterns, the political effort to wink at illegal immigration across the southern border would abruptly stop.

For all the reformist rhetoric about merit-based and ethnically blind legal immigration, there is no evidence yet that the La Raza elite or the Democratic Party prefer race and ethnicity to be irrelevant in adjudicating immigration procedures.

It's hard to find supporters of immigration reform who argue that the Kenyan, South Korean, Czech or Jamaican applicant for entry into the U.S. should be treated equally on the basis of skill sets, education or prior background -- rather than as a future identity-politics voter.

Most Americans are in favor of granting green cards to foreign nationals who have been here for years as long as they pay a fine, are not on public assistance and have no record of criminal activity, and as long as the border remains closed. The majority of the millions residing here illegally might well qualify for eventual legal residence, and would appreciate recognition that they are working, not on state assistance, and have abided by the laws during their long stay in the U.S.

But will reform advocates say whether they would favor deporting those who just arrived in the cynical expectation of amnesty? Will they deport to their countries of origin those who sought public assistance instead of work in the U.S., or those who abused their guest status by committing crimes in their host country? So far, advocates of reform stay mostly mum on those topics. The result is that "comprehensive immigration reform" remains a mushy catchphrase that can mean anything and therefore means nothing.

At a time when ethnic, religious and tribal groups are killing each other across the globe, why are concepts of hyphenation, identity politics or mandatory bilingualism in official documents preferable to the exceptional American idea of a melting pot, a common culture and a shared national language?

Voters last week seemed to be saying that the entire immigration debate is morally upside down.

The true unethical position is that of the immigration hijacker who decides -- without the force of law, public opinion or court sanction -- to enhance his narrow political, cultural or economic interests. He cares little about the ensuing effects of his self-interest on collective infrastructure, social services, law enforcement, criminal justice or state budgets.

So what, exactly, do Americans want out of immigration?

It would seem that Americans appreciate the vibrancy, energy and new ideas that immigrants bring. But a great many Americans also insist that immigrants come legally, in manageable numbers, in ethnically diverse fashion, eager to learn English and assimilate quickly.

If advocates of comprehensive immigration reform are going to win Americans over to their side, they are going to have to find a new approach to the debate that they have now lost.

For now, the position remains the current one of ethnic-privileging one group over another.

The selfish position is the current one of burdening the host society by accommodating the language of the guest.

The surreal position is that of ingratitude of guests toward generous host country by demanding that its laws either be ignored or changed to fit their own particular agendas and preferences.

On matters of immigration, open-borders advocates have become reactionaries.