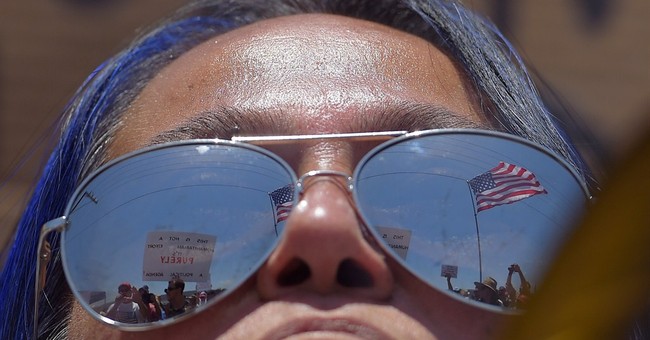 No one knows just how many tens of thousands of Central American nationals -- most of them desperate, unescorted children and teens -- are streaming across America's southern border. Yet this phenomenon offers us a proverbial teachable moment about the paradoxes and hypocrisies of Latin American immigration to the U.S.

For all the pop romance in Latin America associated with Venezuela, Nicaragua and Cuba, few Latinos prefer to immigrate to such communist utopias or to socialist spins-offs like Argentina, Bolivia, Ecuador or Peru.

Instead, hundreds of thousands of poor people continue to risk danger to enter democratic, free-market America, which they have often been taught back home is the source of their misery. They either believe that America's supposedly inadequate social safety net is far better than the one back home, or that its purportedly cruel free market gives them more opportunities than anywhere in Latin America -- or both.

Mexico strictly enforces some of the harshest immigration laws in the world that either summarily deport or jail most who dare to cross Mexican borders illegally, much less attempt to work inside Mexico or become politically active. If America were to emulate Mexico's immigration policies, millions of Mexican nationals living in the U.S. immediately would be sent home.

How, then, are tens of thousands of Central American children crossing with impunity hundreds of miles of Mexican territory, often sitting atop Mexican trains? Does Mexico believe that the massive influxes will serve to render U.S. immigration law meaningless, and thereby completely shred an already porous border? Is Mexico simply ensuring that the surge of poorer Central Americans doesn't dare stop in Mexico on its way north?

The media talks of a moral crisis on the border. It is certainly that, but not entirely in the way we are told. What sort of callous parents simply send their children as pawns northward without escort, in selfish hopes of soon winning for themselves either remittances or eventual passage to the U.S? What sort of government allows its vulnerable youth to pack up and leave, without taking any responsibility for such mass flight?

Here in the U.S., how can our government simply choose not to enforce existing laws? In reaction, could U.S. citizens emulate Washington's ethics and decide not to pay their taxes, or to disregard traffic laws, or to build homes without permits? Who in the pen-and-phone era of Obama gets to decide which law to follow and which to ignore?

Who are the bigots -- the rude and unruly protestors who scream and swarm drop-off points and angrily block immigration authority buses to prevent the release of children into their communities, or the shrill counter-protestors who chant back "Viva La Raza" ("Long Live The Race")? For that matter, how does the racialist term "La Raza" survive as an acceptable title of a national lobby group in this politically correct age of anger at the Washington Redskins football brand?

How can American immigration authorities simply send immigrant kids all over the United States and drop them into communities without firm guarantees of waiting sponsors or family? If private charities did that, would the operators be jailed? Would American parents be arrested for putting their unescorted kids on buses headed out of state?

Liberal elites talk down to the cash-strapped middle class about their illiberal anger over the current immigration crisis. But most sermonizers are hypocritical. Take Nancy Pelosi, former speaker of the House. She lectures about the need for near-instant amnesty for thousands streaming across the border. But Pelosi is a multimillionaire, and thus rich enough not to worry about the increased costs and higher taxes needed to offer instant social services to the new arrivals.

Progressives and ethnic activists see in open borders extralegal ways to gain future constituents dependent on an ever-growing government, with instilled grudges against any who might not welcome their flouting of U.S. laws. How moral is that?

Likewise, the CEOs of Silicon Valley and Wall Street who want cheap labor from south of the border assume that their own offspring's private academies will not be affected by thousands of undocumented immigrants, that their own neighborhoods will remain non-integrated, and that their own medical services and specialists' waiting rooms will not be made available to the poor arrivals.

Have immigration-reform advocates such as Mark Zuckerberg of Michael Bloomberg offered one of their mansions as a temporary shelter for needy Central American immigrants? Couldn't Yale or Stanford welcome homeless immigrants into their now under-occupied summertime dorms? Why aren't elite academies such as Sidwell Friends or the Menlo School offering their gymnasia as places of refuge for tens of thousands of school-age Central Americans?

What a strange, selfish and callous alliance of rich corporate grandees, cynical left-wing politicians and ethnic chauvinists who have conspired to erode U.S. law for their own narrow interests, all the while smearing those who object as xenophobes, racists and nativists.

How did such immoral special interests hijack U.S. immigration law and arbitrarily decide for 300 million Americans who earns entry into America, under what conditions, and from where?