Modern World is Still Premodern in Many Ways 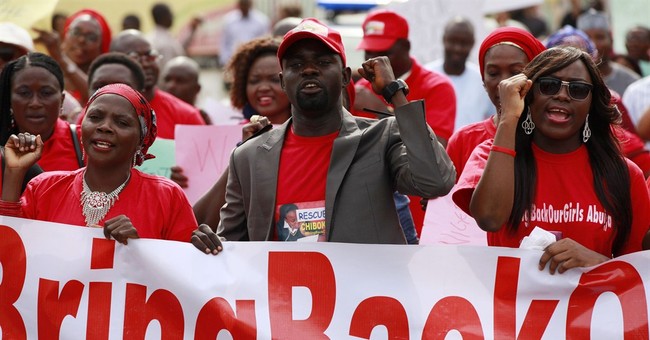 Nigeria's homegrown, al-Qaeda-linked militant group, Boko Haram, brags openly that it recently kidnapped about 300 young Nigerian girls. It boasts that it will sell them into sexual slavery.

Those terrorists have a long and unapologetic history of murdering kids who dare to enroll in school, and Christians in general. For years, Western aid groups have pleaded with the State Department to at least put Boko Haram on the official list of terrorist groups. But former Secretary of State Hillary Clinton's team was reluctant to come down so harshly, in apparent worry that some might interpret such condemnation as potentially offensive to Islamic sensitivities.

Instead, Western elites now flood Facebook and Twitter with angry postings about Boko Haram -- either in vain hopes that public outrage might deter the terrorists, or simply to feel better by loudly condemning the perpetrators.

The Obama administration has exhausted the vocabulary of outrage in condemning the aggressions of Russia's Vladimir Putin. We habitually lecture Mr. Putin that he does not understand it is no longer the 19th century, when blood and arms once settled differences. But Putin has no apologies for his 19th-century worldview of stronger powers dictating to weaker ones as they please. (Nor does Boko Haram have any apologies for slavery.)

Americans go into a frenzy about insensitive language or politically incorrect behavior by some celebrities and public figures -- L.A. Clippers owner Donald Sterling, the "Duck Dynasty" TV family, celebrity chef Paula Deen, former Mozilla CEO Brendan Eich, and Chick-fil-A CEO Dan Cathy. But if we are postmodern and sensitive, what do we say or do about premodern racists with nuclear weapons, like the North Koreans?

A recent article from North Korea's official Korean Central News Agency suggested that President Obama "does not even have the basic appearances of a human being. ... It would be perfect for Obama to live with a group of monkeys in the world's largest African natural zoo and lick the bread crumbs thrown by spectators."

How does the West deal with a mentality like that, originating from a country armed with nuclear weapons? Pyongyang owns no television show that we can boycott, no sports team that we can root against.

What do we do in the face of 19th-century evil that is unapologetic, has lethal weapons at its disposal and uses savage rhetoric to goad us? Twitter it to death?

What about the Sultan of Brunei, who just enacted Sharia law that orders stoning for women found "guilty" of adultery or for homosexuals engaged in sex acts? That is a different sort of war on women than that invoked by Sandra Fluke, who lamented that she did not have free birth control from the government.

In response, an outraged Hollywood elite is boycotting the Sultan-owned landmark Beverly Hills Hotel -- as if that will bother the multibillionaire Sultan rather than his minimum-wage Los Angeles employees.

Americans have become touchy about the reciting of prayers in public places. So what do we think of Saudi Arabia, which just ordered 1,000 lashes for an activist who was deemed to have insulted Islam?

The truth is that much of the world never left the 19th century and is not too worried that it hasn't. We have forgotten that racism, slave trading, lashings and stoning are not that rare on our planet.

We should not confuse material progress with moral advancement. Just because Boko Haram members have cell phones and AK-47s does not mean that they have evolved much from their predecessors' days of whips and chains. And just because the Sultan of Brunei flies in private jets does mean that his worldview is any different from that of his forefathers who on horseback enforced the same Sharia law.

We should also reset our notion of multiculturalism. That is the popular campus fad that postulates all cultures are roughly equal and just different from one another -- as opposed to any one either being better or worse. Left unspoken is the universal standard by which we judge as evil the enslaving, stoning or whipping of the innocent. That moral belief system is Western to the core.

From Greece to Jerusalem to Rome to the Enlightenment to the Founding Fathers slowly grew a standard of human rights that could be applied to anyone, regardless of race, creed or color. But that is still not how most of the non-Western world works today.

The U.N. just appointed theocratic Iran to its Commission on the Status of Women, even though Iranian women are stoned for committing adultery, and some are punished for being rape victims.

As good multiculturalists, should we say, "Who are we to judge either the U.N. or Iran?" Or should we tweet out that soon-to-be-nuclear Iran better leave the 19th century -- or else?