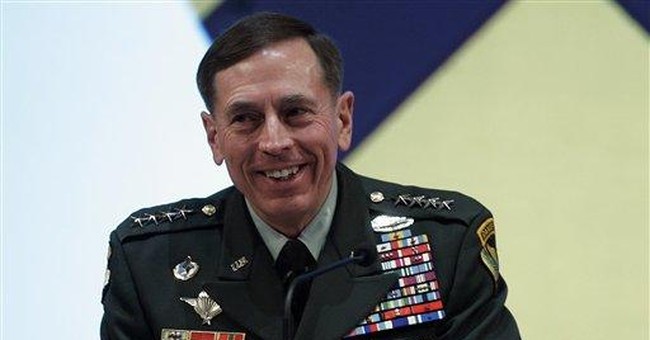 Usually a handful of ex-soldiers seek political office every election cycle. But well over 20 Iraq and Afghanistan war veterans are running this fall for Congress alone. Almost all are riding a wave of public anger at incumbents over a profligate government and dishonest Wall Street -- and a general feeling that the current Democratic remedy has proven as bad as, or worse than, the recent Republican disease.

The shenanigans of the previously Republican-controlled Congress -- the "Culture of Corruption" -- simply continued under the congressional Democrat majority, thanks to the likes of Chris Dodd, William Jefferson, Eric Massa, Charles Rangel and the late John Murtha.

Reform candidate Barack Obama has run up more debt in 15 months than unpopular spendthrift George W. Bush did in eight years. Obama once talked of a new unity, but he has polarized America far more rapidly than did the cowboy-sounding "decider" Bush.

In other words, the public is desperate for civic-minded leaders who are untainted by Washington, but who have a proven record of competent service on behalf of the nation. If they are poor or haven't held office before -- apparently so much the better.

The current combat-veteran candidates certainly aren't the usual state legislators or congressional aides ready for career advancement. Neither are they anti-war liberals who flash their national-security credentials, nor one-issue hawks who want more defense spending. They don't claim that their combat experience guarantees good governance per se -- not after the examples of Murtha or disgraced Republican Duke Cunningham. And they aren't retired generals used to deference and the spotlight.

So other than a shared furor at out-of-control spending, government takeovers and corruption, the twenty-something soldier-citizen candidates are an odd bunch. Some are officers; others are enlisted men. A surprising number were wounded in combat.

The vast majority are running as Republicans and seem to have little if any money. They were not so much preselected by Republican operatives as pushed forward through grassroots and sometimes Tea Party support.

In New York's 20th Congressional District, retired Army Col. Chris Gibson -- four deployments to Iraq -- is a Ph.D., former West Point instructor and author of a book on civilian-military relations. He received a Purple Heart, and recently served in the Haitian relief effort. While Gibson, the warrior scholar, is running on smaller government and lower taxes, his main theme is a call for ethics, accountability and a return to the notion of the citizen-legislator who works in Washington, rather than works the Washington system.

Other veteran candidates are already well known. In Florida's 22nd Congressional District, decorated retired Army Lt. Col. Allen West was involved in a controversy seven years ago when he purportedly fired a pistol near an Iraqi prisoner who he believed had information regarding a planned ambush of West's battalion. West has MA degrees in military arts and sciences and in political science, and was wounded a few years ago while serving as a civilian advisor in Afghanistan. His theme also is ostensibly smaller, cleaner government, balanced budgets, strong national security and lower taxes.

For 30 years after 1865, almost no American could get elected to office without prior Union or Confederate Civil War service. And last century, being a World War II veteran was virtually mandatory for any congressional leader until about 1970.

But Iraq and Afghanistan are seen differently from the collective sacrifice and bipartisan efforts of past wars. Our current veterans usually fought in impossible circumstances, where friend and enemy were sometimes indistinguishable. The aims and means of their mission were often questioned -- with the public as against the difficult later stages of the wars as they once were for them in the easier beginning stages.

As a result, these veterans are not saying, "Vote for me for because I fought for you," as much as, "Vote me for because I did my duty even if some in this country questioned why one would."

We live in a wartime of economic crisis, crushing debt and endemic political corruption. Rules, obligations and laws don't seem to matter. Personal honor is an archaic, fossilized concept.

But suddenly, amid public malaise, dozens of nontraditional soldier-citizens have stepped forward out of the shadows to argue that right now in America, neither money nor incumbency matters as much as civic duty and the old idea of public service. And unlike most of us, they once put their lives on the line to prove just that.