America's Nervous Breakdown - And the World's 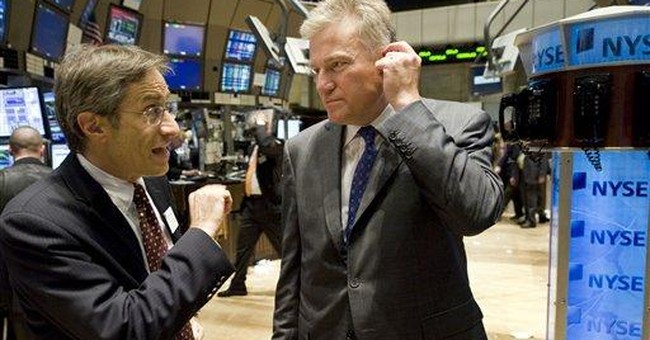 Ancient thinkers from Thucydides to Cicero insisted that money was the real source of military power and national influence. We've been reminded of that classical wisdom these last three weeks.

In a manner not seen since the Great Depression, Wall Street went into panic mode from too many bad debts. The symbolic pillars of American monetary strength for years - AIG, Goldman Sachs, Merrill Lynch, Shearson-Lehman and Washington Mutual - in a matter of hours either went broke, were absorbed or were reconstituted. Fannie Mae and Freddie Mac collapsed like the house of cards that they were.

Even though the U.S. government rushed to restore trust, hundreds of billions of dollars in paper assets simply vanished. Friends and enemies abroad were unsure whether the irregular American heartbeat was a major coronary or a mere cardiac murmur. How strong really was the world's greatest economy? Was this panic the tab for years of borrowing abroad for out-of-control consumer spending? Had America finally gone too far enriching dictators by buying energy that it either could not or would not produce itself? Had the chickens of lavishing rewards on Wall Street and Washington speculators rather than Main Street producers finally come home to roost? Allies trust that the United States is the ultimate guarantor of free communication and commerce - and they want immediate reassurance that their old America will still be there. In contrast, opportunistic predators - such as rogue oil-rich regimes - suddenly sniff new openings. We've seen the connection between American economic crisis and world upheaval before. In the 1930s, the United States and its democratic allies, in the midst of financial collapse, disarmed and largely withdrew from foreign affairs. That isolation allowed totalitarian regimes in Germany, Italy, Japan and Russia to swallow their smaller neighbors and replace the rule of law with that of the jungle. World War II followed. During the stagflation and economic malaise of the Jimmy Carter years, the Russians invaded Afghanistan, the Iranians stormed our embassy in Tehran, the communists sought to spread influence in Central America and a holocaust raged unchecked in Cambodia. It was no surprise that an emboldened Iranian President Mahmoud Ahmadinejad once again last week called for the elimination of Israel. He's done that several times before. But rarely has he felt brazen enough to blame world financial problems on the Jews in general rather than on just Israelis. And he spouted his Hitlerian hatred in front of the United Nations General Assembly - in New York, just a few blocks away from the ground zero of the Wall Street meltdown. Flush with petrodollar cash, a cocky Iran thinks our government will be so sidetracked borrowing money for Wall Street that disheartened taxpayers won't care to stop Tehran from going nuclear. At about the same time, a Russian flotilla was off Venezuela to announce new cooperation with the loud anti-American Hugo Chavez and his fellow Latin American communists. The move was a poke in the eye at the Monroe Doctrine - and a warning that from now on the oil-rich Russians will boldly support dictatorships in our hemisphere as much as we encourage democratic Georgia and Ukraine in theirs. Chavez himself called for a revolution in the United States to replace our "capitalist" Constitution. The lunatics running North Korea predictably smelled blood as well. So it announced that it was reversing course and reprocessing fuel rods to restart its supposedly dismantled nuclear weapons program. Meanwhile, some shell-shocked American bankers looked to our "friend" China, which holds billions in American government securities, for emergency loans. But the Chinese - basking in their successful hosting of the Olympics, their first foray into outer space, and a massive rearmament - showed no interest in sending cash to reeling Wall Street firms. During this Wall Street arrhythmia, Islamic suicide bombers attacked the American embassy in Yemen and the Marriott Hotel in Islamabad, Pakistan. Suspected Islamic terrorists were caught boarding a Dutch airliner in Germany. And suicide bombers were busy again in Afghanistan and Iraq. The natural order of the world is chaos, not calm. Like it or not, for over a half-century the United States alone restrained nuclear bullies, kept the sea lanes free from outlaws and corralled rogue nations. America alone could provide that deterrence because we produced a fourth of the world's goods and services, and became the richest country in the history of civilization. But the bill for years of massive borrowing for oil, for imported consumer goods and for speculation has now has finally come due on Wall Street - and for the rest of us as well. Should that heart of American financial power in New York falter - or even appear to falter - then eventually the sinews of the American military will likewise slacken. And then things could get ugly - real fast. XXXX (Victor Davis Hanson is a senior fellow at the Hoover Institution and a recipient of the 2007 National Humanities Medal. You can reach him by e-mailing author@victorhanson.com.) (C) 2008 TRIBUNE MEDIA SERVICES, INC.