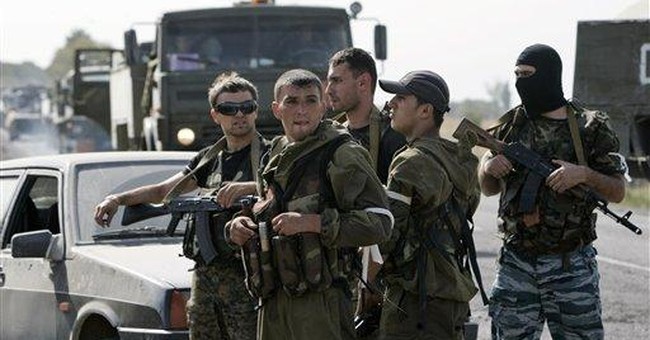 "Citizens of the world" were supposed to share, in relative harmony, our new "Planet Earth," which was to have followed from an interconnected system of free trade, instantaneous electronic communications, civilized diplomacy and shared consumer capitalism.

But was that ever quite true?

In reality, to the extent globalism worked, it followed from three unspoken assumptions:

Second, the U.S. military would keep the sea-lanes open, and trade and travel protected. After the past destruction of fascism and global communism, the Americans, as global sheriff, would continue to deal with the occasional menace like a Muammar al-Gaddafi, Slobodan Milosevic, Osama bin Laden, Saddam Hussein, Kim Jong-il or the Taliban.

Third, America would ignore ankle-biting allies and remain engaged with the world -- like a good, nurturing mom who at times must put up with the petulance of dependent teenagers.

But there have been a number of indications recently that globalization may soon lose its American parent, who is tiring, both materially and psychologically.

The United States may be the most free, stable and meritocratic nation in the world, but its resources and patience are not unlimited. Currently, it pays more than a half trillion dollars per year to import $115-a-barrel oil that is often pumped at a cost of about $5.

The Chinese, Japanese and Europeans hold trillions of dollars in U.S. bonds -- the result of massive trade deficits. The American dollar is at historic lows. We are piling up staggering national debt. Over 12 million live here illegally and freely transfer more than $50 billion annually to Mexico and Latin America.

Our military, after deposing Milosevic, the Taliban and Saddam, is tired. And Americans are increasingly becoming more sensitive to the cheap criticism of global moralists.

But as the United States turns ever so slightly inward, the new globalized world will revert to a far poorer -- and more dangerous -- place.

Liberals like presumptive Democratic presidential nominee Barack Obama speak out against new free trade agreements and want existing accords like NAFTA readjusted. More and more Americans are furious at the costs of illegal immigration -- and are moving to stop it. The foreign remittances that help prop up Mexico and Latin America are threatened by any change in America's immigration attitude.

Meanwhile, the hypocrisy becomes harder to take. After all, it is easy for self-appointed global moralists to complain that terrorists don’t enjoy Miranda rights at Guantanamo, but it would be hard to do much about the Russian military invading Georgia's democracy and bombing its cities.

Al Gore crisscrosses the country, pontificating about Americans’ carbon footprints. But he could do far better to fly to China to convince them not to open 500 new coal-burning power plants.

It has been chic to chant "No blood for oil" about Iraq's petroleum -- petroleum that, in fact, is now administered by a constitutional republic. But such sloganeering would be better directed at China's sweetheart oil deals with Sudan that enable the mass murdering in Darfur.

Due to climbing prices and high government taxes, gasoline consumption is declining in the West, but its use is rising in other places, where it is either untaxed or subsidized.

So, what a richer but more critical world has forgotten is that in large part America was the model, not the villain -- and that postwar globalization was always a form of engaged Americanization that enriched and protected billions.

Yet globalization, in all its manifestations, will run out of steam the moment we tire of fueling it, as the world returns instead to the mindset of the 1930s -- with protectionist tariffs; weak, disarmed democracies; an isolationist America; predatory dictatorships; and a demoralized gloom-and-doom Western elite.

If America adopts the protectionist trade policies of Japan or China, global profits plummet. If our armed forces follow the European lead of demilitarization and inaction, rogue states advance. If we were to treat the environment as do China and India, the world would become quickly a lost cause

If we flee Iraq and call off the war on terror, Islamic jihadists will regroup, not disband. And when the Russians attack the next democracy, they won't listen to the United Nations, the European Union or Michael Moore.

Brace yourself -- we may be on our way back to an old world, where the strong do as they will, and the weak suffer as they must.