Veronique de Rugy
|
Posted: Jul 05, 2018 12:01 AM
Share   Tweet
The opinions expressed by columnists are their own and do not necessarily represent the views of Townhall.com. 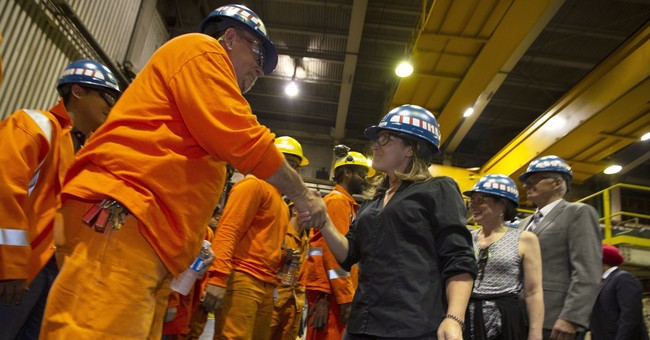 The Fourth of July is a day to reflect on the courage of our Founding Fathers to pursue independence from the tyrannical British government. Unfortunately, we now get to spend the other 364 days dealing with the tyrannical federal government in Washington.

You see this in our debt and increasing deficits to entitlement programs that redistribute from relatively young and poor to relatively rich and old - or in our corporate welfare programs that subsidize a handful of producers at the expense of everyone else. You also see it in a never-ending stream of contradictory legislation and red tape at the taxpayers' expense.

Consider the oil and gas industry. Over the years, the federal government has adopted many regulations meant to hinder the industry. As Nick Loris, an energy policy analyst at The Heritage Foundation, reminds me, one such regulation is the Merchant Marine Act, also known as the Jones Act, which makes it more expensive to ship oil and natural gas from coast to coast. Then there are the past administrations' outright moratoriums on drilling in certain areas of America's coasts, which massively increases the cost of doing business. As Loris notes, there are many costly bureaucratic delays in issuing leases and processing applications for permits to drill (APDs), which stalls production on federal lands. On average, the federal processing of APDs in the last year of the Obama administration was 257 days, while state processing is typically 30 days or less.

Since Uncle Sam has a lot of regulations in place to make the operations of domestic oil and gas companies more costly, why is the biggest beneficiary of loans from the federal government export credit agency (the U.S. Export-Import Bank) the gigantic Mexico state-owned oil and gas company Pemex? Between 2007 and 2013 (the most complete data set we have), Pemex received over $7 billion in loans backed by American taxpayers to buy U.S. goods. Thanks to Uncle Sam, this discounted borrowing power gives Pemex a leg up on its competition with domestic oil and gas companies.

Then there's the Trump administration tariffs. These import taxes on foreign goods coming from Europe, China and other countries have not only raised the cost of doing business but also triggered retaliatory measures from foreign governments. For instance, the farm industry is paying a steep price from the tariffs on steel because they increase the cost of farm machinery, lowering profit margins. Farmers are also hurt by the European, Mexican, Canadian and Chinese governments that have imposed retaliatory export restrictions on U.S. farm products. Many small farms are calling for help to survive. It's so bad that the entire Iowa congressional delegation sent a letter to President Trump on June 25 in which it called the tariffs "catastrophic for Iowa's economy."

A logical response from the administration would be to remove the tariffs and sit down at the negotiating table to argue for lower tariffs by everyone. Instead, the administration is calling for more subsidies for farmers to help them face the government-induced export problems. Deputy Agriculture Secretary Steve Censky said his department was considering options including the purchase of surplus commodities to prop up prices. How should taxpayers feel about that? The administration starts a trade war that makes it harder for farmers to sell their stuff abroad, so taxpayer dollars are then used to buy those unsold goods. Bear in mind that taxpayers are already paying higher prices thanks to the president's import taxes of foreign goods.

And all of this is taking place as the mother of all logical inconsistencies is working its way through Congress: the farm bill. I predict - as is always the case - that the massive spending bill will both raise the price of food artificially and then subsidize food for those who can't afford the government-inflated prices. Many of the farm subsidies that will make their way into the bill, such as those for sugar programs or dairy and corn subsidies, make the cost of food more expensive. At the same time, this bill will also plan to spend hundreds of thousands of dollars on food stamps.

Simple cause-and-effect logic tells us that if you want to lose weight, you don't eat french fries and ice cream at every meal. It's common sense. But every day, legislators pass bills that have opposite and counterproductive effects. So much for logic. Happy Independence Day!