Veronique de Rugy
|
Posted: Mar 08, 2018 12:01 AM
Share   Tweet
The opinions expressed by columnists are their own and do not necessarily represent the views of Townhall.com. 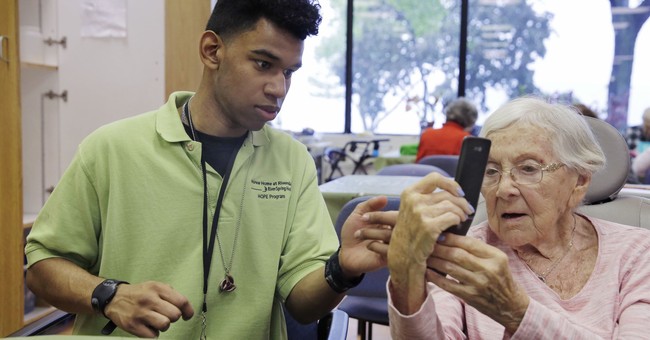 Social Security and Medicare are the two biggest programs driving the growth of our debt. What's more, they provide benefits for senior Americans generally, without regard to need. It's time to change the way we think about these programs.

It's difficult to overstate how much of our budget goes toward these programs. Numbers from the Congressional Budget Office show that in the past 10 years, 70 percent of real spending increases have gone to Social Security and Medicare. In fiscal 2017, the federal government spent $4 trillion. Of that, 40 percent -- $1.5 trillion, or 8 percent of our gross domestic product -- went to Social Security and Medicare. These two programs will consume $3 trillion in the next decade, and that doesn't include the interest charged on Uncle Sam's credit card.

In an article for National Review titled "The Entitlement Crisis Ignored," the Manhattan Institute's Brian Riedl reports that within three decades, the Social Security and Medicare systems will run a cash deficit of $82 trillion -- including interest. "The rest of the federal budget roughly balances over 30 years," he told me in an email detailing his research. He added: "In other words, the entire long-term deficit comes from these two programs' shortfalls. The national debt would reach 150 percent of GDP" at the current rate.

The main beneficiaries from Social Security and Medicare -- meaning the main beneficiaries of most of our budget -- are seniors. Only about 30 percent of Social Security benefits are not paid based on age. (That's the money going to disabled workers, dependents and survivors.) The same is true of Medicare, though to a smaller degree. It's also worth noting that about 28 percent of Medicaid's $400 billion in spending -- federally provided health care payment for low-income Americans -- goes to seniors. That's because seniors are poor, right? Not all of them.

Back in the day, not working meant becoming poor. As a result, seniors were overrepresented in the bottom income quintile. But this isn't the case anymore. According to combined data from 15 federal agencies in 2011, older Americans are in remarkably good financial shape compared with those of previous generations, as they've seen their net wealth go up by 90 percent since the 1980s. Older Americans are also doing well relative to younger Americans. According to the Pew Research Center, in 2009 the typical household headed by someone 65 or older had $170,494 in net wealth, compared with just $3,662 for the typical household headed by someone younger than 35. Not surprisingly, today's seniors are overrepresented in the top income quintile.

Yet those seniors as a group receive the largest and a growing share of our budget, funded by taxes on the relatively meager wages of younger Americans. The direct outcome is that as demographic trends progress, we're about to witness the most massive and growing redistribution from the relatively younger and poor Americans to their relatively older and wealthier neighbors.

From any serious fiscal or moral viewpoint -- and particularly for the sake of helping those truly in need -- Social Security and Medicare should be replaced with social welfare programs that cover all citizens, regardless of age, but only those who are too poor or incapacitated to take care of themselves. In other words, we should transition from a system based on age to one based on need. This is the best way to avert looming fiscal catastrophe and restore some sensibility to an indefensible system.