Calls for a Carbon Tax Are Misguided

Veronique de Rugy
|
Posted: Feb 16, 2017 12:01 AM
Share   Tweet
The opinions expressed by columnists are their own and do not necessarily represent the views of Townhall.com. 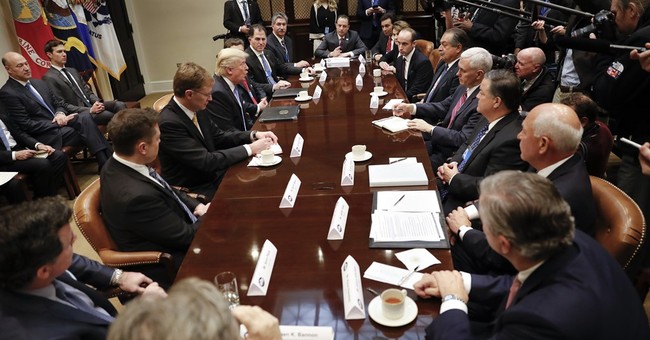 There's a full-court press underway to convince President Donald Trump that it would be a good idea to impose a carbon tax on the American people. He's hearing about it not only from well-connected businessmen such as Elon Musk but also from establishment Republicans. Let's hope he has the fortitude to resist their exhortations.

Musk's advocacy is easy to understand. In the same way he has benefited from other government policies in the past, he would be a major beneficiary of actions punishing fossil fuel consumption, through his electric car and solar power businesses. A carbon tax would be just another in a long line of government handouts for his companies.

The Republicans pushing a carbon tax, on the other hand, have different motives. They mean well but are misguided.

The primary group behind the effort, the Climate Leadership Council, claims to consist of a "who's who of conservative elder statesmen." It comprises veterans of past Republican administrations, including former Secretary of State James Baker, former Treasury Secretary Hank Paulson and economist Greg Mankiw.

The members of the Climate Leadership Council want to replace many existing environmental regulations with a carbon tax, arguing that it would be more economically advantageous. This is a seductive but ultimately unconvincing argument for several reasons.

First, they are presenting an alternative to regulation where none need exist. The best answer to unnecessary and burdensome environmental regulations is to abolish them. Proposing to trade them for a carbon tax might make sense if Democrats were in charge. But under a unified Republican government, that approach is like deliberately taking a knee at the 1-yard line and kicking a field goal instead of just walking into an unprotected end zone. Just take the easy score.

Second, the trade itself is an illusion. History has repeatedly shown that when new taxes are adopted in exchange for reducing the scope of government, we always get the tax increases and rarely see the promised returns. When they do arrive, they are short-lived. Put another way, there's little reason to expect that the next Democratic administration won't reinstate all the regulations supposedly traded for a carbon tax and then keep the tax.

Finally, there's reason enough to be skeptical about the environmental claims. The debate over climate change is obviously complicated and extremely politically charged. Yet even if one agrees that the climate is changing, it's not unreasonable to question whether we should be basing policy on predictive climate models that have overestimated future temperatures for decades and are likely overly sensitive to changes in carbon dioxide.

Furthermore, if we accept the models, even the Environmental Protection Agency's estimates that entirely eliminating all U.S. carbon emissions -- which would be completely impractical and detrimental to growth -- would have less than a negligible impact on temperatures by the end of the century.

This is an important issue, and it is important to do it right rather than act based on knee-jerk reactions as is typically done in Washington. Unintended consequences, such as chasing high-carbon activity into markets with fewer controls, would most likely reduce the impact of a carbon tax even further. The intended consequence of raising the costs of energy on Americans would be bad enough, and it wouldn't be justified by the offered benefits. Let's hope President Trump can see through the arguments of these carbon tax petitioners.