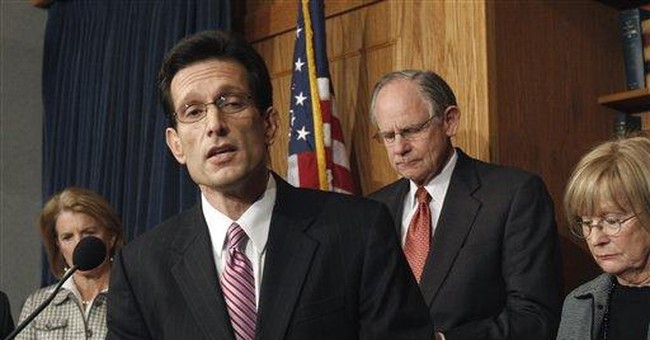 Republican Minority Whip Eric Cantor’s bold prediction last week that Republicans could regain Congress in 2010 came as a surprise to most pundits and political observers. But it's not necessarily wishful thinking.

Yes, Republicans have had two abysmal cycles in which the GOP lost 51 seats in the House, lost the Senate, lost control of many state legislatures, and lost the Presidency. How you ask can Republicans take back Congress?

First off, most signs point to 2010 being a good year for Republicans, though admittedly, in the last two cycles the Grand Old Party looked more old than grand. The silver lining: the GOP today has nowhere to go but up. And with the election of Michael Steele as RNC Chairman, there’s a new, more vibrant (albeit less conventional face) on the GOP.

Michael Steele’s election may not alone be enough. But in combination with over-reaching by the Democrats and an economy still in the tank, Republicans may have gotten the boost needed to assure a reasonably decent year.

The difference between a great year and a decent year may depend heavily on whether Republicans adopt the strategy Steele pushed in his race for Chairman.

Steele advocated three new approaches to win in 2010. First, expand the playing field by recruiting great candidates in every district for every office. Second, run smarter campaigns that use all the means available to push a message including a renewed emphasis on volunteers and upgraded use of technology. And finally, offer a motivational, contrasting and visionary message to America.

Solid candidate recruitment is the foundation of a Republican resurgence. Like the lottery, when it comes to campaign politics, if you don’t play, you can’t win. When parties recruit strong candidates, they expand the number of messengers for their cause into new communities. Chairman Steele knows that the best outreach starts with articulate and compelling personalities willing to convey a message that contrasts strongly with the Democrat message of victimization and government entitlement.

Given what promises to be a tough fundraising year for Republicans, there certainly is a place for targeting resources. But with a huge Republican wave like that which might well develop in 2010, these could be the cheapest seats the Republican Party has ever won. You don’t have to spend much to win votes from those ready to take up pitchforks against your opponents.

Republicans have to offer their message to everyone, everywhere with courage and conviction. Republicans can win seats they never thought they could win in 2010 only with competent, articulate candidates offering something different than a $20 trillion national debt and a trail of broken promises about change.

Second, to take back Congress Republicans have to run smart, upstart campaigns that aren’t afraid to use surprise and aggressive tactics. Republicans can’t win by running campaigns as if the GOP were still in charge. Newsflash to GOP candidates: no one is going to parachute into your district with $4 million this election year.

GOP candidates now have to prepare to do their own heavy lifting. They have to hire smart campaign teams who know how to win insurgent campaigns; they have to build real relationships with voters, not rely entirely on expensive television ads and direct mail pieces; they must run aggressive campaigns that take fast advantage of their opponent’s mistakes; and they must raise their campaign’s cash instead of relying on someone else to save them when they fall short.

Sure, Republicans will be outspent by the Democrats in 2010 – maybe by as much as 30% or 40% -- but that doesn’t mean Republicans won’t have enough money to convey their message. Look at 2006 to see how a dramatically outspent Democrat Party capitalized on a sour national mood and candidates committed to winning.

Finally, to take back Congress in 2010 the GOP will have to articulate a positive vision for the future of America. Republicans won’t win by continuing to define the Party solely by what it is not. “We’re not them” will only get Republicans so far and it’s not far enough to regain the House. Republicans must convince America they have new ideas and that those ideas will provide real benefits to families by making them safer, more prosperous, and more hopeful.

Specifics are important because they establish the plan as rational, credible and doable. But the message needn’t be unduly burdened or delayed by a comprehensive agenda. Most Americans couldn’t tell you what was in the Contract with America in 1994. Voters only knew it represented a distinction with the nationalized health care agenda of Hillary Clinton.

Only a few months after Obama’s inauguration, Americans are slowly awakening to the reality that Obama’s “change-you-can-believe-in” was a rhetorical sham. His budget, his bailouts, his stimulus, his earmarks, and his groveling to European leaders show a president more committed to a leftist agenda than to the principled change on which he campaigned.

It all amounts to a great opportunity for Republicans. But the gap between a good year and a great one remains massive. To cross it, Republicans have to put first things first – something they haven’t done well in recent elections -- recruit, smarten up, and get a message that motivates, contrasts and energizes.

If the GOP does that, Eric Cantor’s comments about Republican prospects in 2010 will look more prescient than wishful. All the elements are falling into place for a GOP wave in 2010. If the Republican Party and its candidates do their part, it seems likely at this point America’s voters will do the rest.