Tom Walton
|
Posted: Aug 04, 2018 12:01 AM
Share   Tweet
The opinions expressed by columnists are their own and do not necessarily represent the views of Townhall.com. 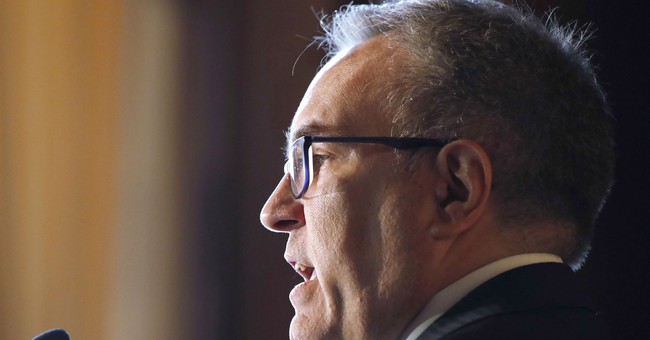 The Environmental Protection Agency (EPA) and National Highway Traffic Safety Administration (NHTSA)on Thursday proposed that the nation’s costly and counterproductive fuel-economy standards remain at 2020 levels through 2026, abandoning President Barack Obama’s plans to raise them each year. Eliminating the standards altogether would be ideal, but this move is a reasonable response to the California Air Resources Board (CARB) trying to set standards for the whole country.

CARB and its sister “blue” anti-Trump states constitute 35 percent of the nation’s auto buyers, and they are threatening to go their own way and impose the Obama-era standards if EPA ultimately enacts this proposal to relax the Corporate Average Fuel Efficiency (CAFE) mandate. There is absolutely no reason, however, for Acting EPA Administrator Andrew Wheeler to abandon the leverage he enjoys in this important debate.

In a March 30 article for Automotive News, Eric Kulisch argued against the Trump administration’s move to roll back CAFE standards, suggesting auto companies will have to “set up production lines to create two versions of vehicles.” This makes no sense. Automakers will be a lot better off if they aren’t forced to sell so many underpowered, less safe, undersized vehicles, many of which nobody wants to buy.  (On the adverse safety impacts of the standards, see Sam Kazman, “Fuel Economy Standards Threaten Vehicle Safety,” Competitive Enterprise Institute, September 7, 2017)

Nowadays, every auto manufacturer competes in a worldwide automotive market, selling literally tens of thousands of different equipment packages based off a handful of production platforms. The watchword for auto assembly is “flexibility”—the ability to quickly and efficiently switch from one vehicle configuration to another and then back again on a moment’s notice.

Consider a recent flier from the Ford Motor Company that states “its global flexible manufacturing [can] produce on average four different models at each plant around the world to allow for greater adaptability based on varying customer demand. … virtually all Ford vehicles will be built off nine core platforms, boosting manufacturing efficiency, while giving customers the features, fuel efficiency and technology they want anywhere in the world.”

For instance, the compact Ford Focus car and Escape SUV are built using the same core platform and with the same cost to build out. This is also true for other full-line vehicle manufacturers.

What if CARB were to react by raising its standard to 50 mpg, up from the current 39.36 mpg for California and the nation? That would drive down the requirement now in place in the other 37 states to 22.2 mpg, which is more than 5 mpg below the 2016 standard.

Similarly, at 119 mpg—EPA’s rating for the Chevrolet Bolt and presumably CARB’s ultimate objective—the standard for other states would fall to 19.5 mpg, effectively repealing their standard and freeing them to get the performance, size, and safety consumers in those states want and are willing to pay for. Many more jobs would likely be generated as a result, as the factories in those states would be freed to meet the ensuing expansion in demand.

Although some might say lowering fuel-economy standards would cause environmental harm, the truth is it would likely reduce harm. Higher fuel economy standards translate into more miles driven and thus more criteria pollutants (gases that cause photo chemical smog) emitted. Economists call this the “rebound effect.” Costly fuel-economy equipment requirements also lead to fewer new vehicle sales and thus the retention of older, less safe, and higher-polluting vehicles via the “clunker effect.”

Some argue fuel-economy laws are necessary to fight global warming, but they do nearly nothing to address the alleged dangers of climate change. Carbon dioxide is a plant nutrient, and temperate climate zones such as ours would benefit from longer growing seasons (assuming increased auto emissions result in warming, which would be very modest under all but the most extreme climate projections, and thus a benefit to the environment).

Hold firm, Acting Administrator Wheeler! You are on the side of the angels!