Tom Tradup
|
Posted: Feb 16, 2021 9:34 AM
Share   Tweet
The opinions expressed by columnists are their own and do not necessarily represent the views of Townhall.com. 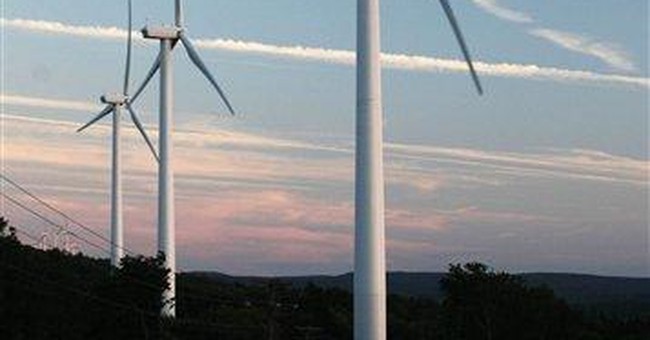 Four million of my fellow Texans have struggled without electricity over the past few days,  braving bitterly sub-zero temperatures which accompanied a monstrous, historic winter storm. Homes throughout The Lone Star State were plunged into darkness as the Texas’ overloaded power grid led to “rolling” blackouts…some lasting 19 hours or more. Schools and businesses closed. Grocery stores in San Antonio and Austin were shut due to dwindling supplies.

In short, you can understand why our governor Greg Abbott declared a state of emergency in all 254 counties in Texas.

As ever-hyperbolic TV weathercasters waved their arms wildly like windmills, actual windmills (which have blighted our gorgeous Texas landscapes since 1999) ground to a halt, caked with ice in the bitter cold. And since wind turbines now account for roughly 25 percent of all statewide energy in Texas—our second-largest source after natural gas—it is a tad problematic to have them go AWOL during a historic winter storm like the one still unfolding.

That “dark winter” Joe Biden kept yammering about in his basement all last year apparently has arrived. (In case you think I’m being inaccurate, just Google “Joe Biden + Dark Winter.”  I did, and Google returned 304,000 results in just 0.83 seconds.) Biden was most often using the term to denigrate then-president Donald Trump’s efforts to fast-track a vaccine for the Wuhan virus, but since millions in Texas and Oklahoma are now literally in the dark this winter, we’ll borrow Biden’s favorite term.

Two of our friends have a special needs daughter who requires feeding equipment and other assistance that is challenged when their home is without electricity for 20-plus hours and temperatures inside the house dip into the low 40s.  A co-worker of mine has a husband who has been battling cancer and is currently hospitalized; she cannot be with him as she cannot get her car out of the garage and the electric gate to her subdivision is locked closed. Pipes are freezing and many homes are covered in ice and snow like that Siberian dacha in David Lean’s 1965 film Dr. Zhivago.

Of course, malfunctioning windmills aren’t entirely to blame for our current energy shortages. But given how John “Reporting for Duty” Kerry—President Biden’s anointed “Climate Czar”—is always touting them as part of his litany of the renewable resources we need to develop, a little history lesson is in order.

The first electricity-generating wind turbine in our state was erected on an 80-meter tower in Spring, Texas, back in 1999. Today, there are nearly 11,000 of the giant eyesores honeycombing the state…growth which mushroomed in part because a lease for placing just one wind turbine can generate about $8,000 annually for a landowner.  More turbines = higher rents. Basically the same principle as drug pushers in Harlem: your first bag of heroin is always free.

Problems, however, arise when the Free Market and pro-energy Texas once governed by Rick Perry falls into the clutches of Greta Thunberg worshippers like Biden and Kerry. Suddenly, the once limitless future of oil shale production, drilling for untapped reserves, and other parts of the Trump administration’s AMERICA FIRST energy policy starts to look—say it, Joe— “dark.” As coal is frowned upon by the new Washington administration, there goes another key source of America’s energy independence. Importing oil from Canada? Biden killed the Keystone XL pipeline—and 11,000 solid, high-paying jobs—in an Executive Order on his very first day in office. He updated the old Harry Truman buck-stops-here motto: under Biden, it reads “The Fossil Fuel Stops Here.”

John Forbes Kerry—who famously flew to Iceland on his private jet to accept an environmental award—successfully engineered returning the United States to the Paris Climate Accords which accomplish zero other than handcuffing American businesses while polluters in China and India (effectively exempt from the Paris agreement after designating themselves “developing countries”) will continue to eat our lunch in world markets.

Not to mention Biden and Kerry being called upon by over 200 Hollywood celebrities to pay them back for their 2020 campaign support by killing yet another critical project, the Dakota Access Pipeline.  Call me old fashioned, but I’m just a wee bit uncomfortable entrusting our nation’s energy supply to the whims of Ryan “Green Lantern” Reynolds, Jane Fonda, Chris “Captain America” Evans and Joaquin Phoenix. (Although I admit he deserved the Academy Award as Best Actor he won for his performance in “Joker” where he shoots Robert DeNiro in the forehead more than once, I still am not sure Joaquin Phoenix is a guy I want calling the shots for America’s future energy policy.)

And with even Great Britain’s struggling Jaguar luxury car brand this week promising to be all-electric by 2025, demand for electricity is only going to skyrocket in the years ahead. So whether Alyssa Milano or Cher or Leonardo DiCaprio like it or not, moves to kill fossil fuels are short-sighted and dangerous.

And as empty as Kerry’s 1970’s photo op throwing “his” military medals over the White House fence to protest the Vietnam War. Except it later turned out he actually kept his own medals and had only thrown away ribbons and medals of “two other veterans who could not attend the protest.” Some Climate Czar.

Back in Texas, as nightfall again threatens to plunge temperatures into the single digits…America has seen a preview of the “Dark Winter” Biden’s misguided energy policy may yet bungle the rest of the nation into if the president isn’t stopped from slamming the brakes on fossil fuels. All the while awaiting the “promise” of Green Energy jobs from solar panels, electric cars, and other technologies not yet invented, but which meet the adoring approval of woke Hollywood A-listers.

Tom Tradup is V.P./News & Talk Programming for Dallas-based SALEM Radio Network. He can be reached at ttradup@srnradio.com