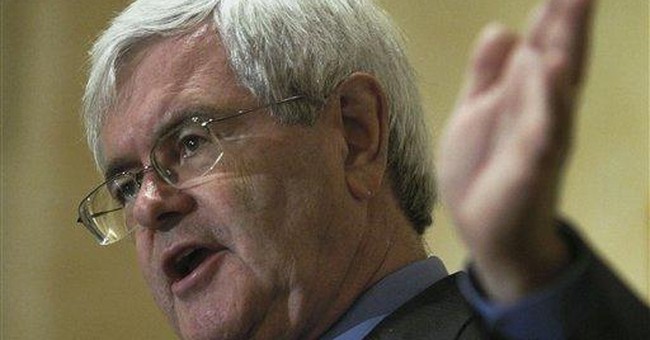 While Newt Gingrich is correct in warning that Republicans in Congress face formidable odds in November, his proposed nine-point "action plan" does not measure up as a solution to the crisis.

Some of Newt's assumptions are undeniably sound, such as the folly of hitching congressional campaigns to McCain’s non-existent coattails. And it is true that the Republican Party's crisis is the result of "catastrophic collapse of trust in Republicans." What are missing from Newt's plan are policy measures that match his apocalyptic rhetoric.

Of Newt's nine proposals, only a few attack major problems. Yes, declaring English our official language would be a giant step forward, and educating the public on the freedoms at stake in federal court appointments is a winner. But sound policy ideas alone will not defuse the voter cynicism which overshadows 2008 unless they address the problems that gave rise to the cynicism. I'm sorry to say that many of Newt's proposals seem more designed to help incumbent Republicans fight the do-nothing label than to help mold a bold Republican Party platform.

An obvious issue which offers potential for Republican electoral success is illegal immigration, an issue Gingrich conspicuously ignores. In that telling silence, Gingrich echoes the strange insularity of the party's beltway guns-for-hire. That silence and that absence of bold proposals only reinforce the public distrust Gingrich continually bemoans.

Evidently, Gingrich does not see any "real solutions" to the mess created by decades of open borders and near zero enforcement of our immigration laws. He is wrong: there are real solutions, but they are difficult solutions. Fortunately or unfortunately, reaching the one goal McCain has pledged to take seriously -- achieving secure borders -- will take at least five years of sustained efforts. During that period we can improve enforcement of our employment laws through the E-Verify Program and watch millions of illegal aliens self-deport as their jobs disappear.

It is a mystery why supposedly smart Republican strategists continue to ignore the elementary fact that border security and immigration enforcement have the support of over 75% of the American people. Illegal immigration continues to show up in polls as one of the top issues of concern to voters, and even liberal Democrats must pay lip service to border security. The challenge, of course, is to move from lip service to concrete, meaningful legislation. That is what is known as leadership.

It is true that Bush's addiction to amnesty proposals and the rhetoric of "comprehensive immigration reform" have left the Republican Party with a schizoid image on this issue, but that is not the record of congressional Republicans. A majority of Senate Republicans opposed both the 2006 and 2007 amnesty bills, and House Republicans have overwhelmingly supported the enforcement-first strategy embodied in bills like the SAVE Act (H.R.4088). That bill now has 178 Republican signatures on a discharge petition because it has been denied a vote in committee by Speaker Pelosi. The reason Pelosi wants to keep this bill from a floor vote is the same reason Republicans should be talking about it daily.

If congressional Republicans want to run on Gingrich’s platform of “real change" and real solutions, border security and immigration enforcement have to be near the top of the list. House Republicans can run on this winning issue despite the obstructions thrown up by the RNC and the McCain campaign. It makes no sense for Republican strategists to acknowledge on the one hand that McCain has no coattails while refusing to adopt proposals that are good for the party as a whole merely because McCain is not on board. What is this, the blind leading the bland? Obviously, that independent strategy could be sabotaged if McCain begins to back pedal on the pledge he made at CPAC in February regarding border security.

McCain needs to be reminded every day that his presidential campaign was dead in the water until he started saying he had "gotten the message" and now supports achieving secure borders before attempting any other reforms. McCain should announce his support for the SAVE Act, which accelerates the concrete steps to secure borders, and dare Obama and Clinton to do the same. Instead, he announces he will speak to the national convention of the National Council of La Raza. This kind of shameful pandering to a special interest lobby devoted to open borders is not “outreach,” it is capitulation.

Gingrich has often provided outside-the-box proposals and ideas and frequently bucks conventional wisdom. But downsizing the U.S. Census Bureau and improving our air traffic control system simply don't cut it as bold solutions designed to generate broad voter support in November. How about expedited deportation for the 400,000 criminal aliens now in our country? What about a crash program to implement the US-VISIT program so we can actually monitor the entry and exit of millions of foreign visitors who arrive annually on temporary visas? House Republicans could push a Resolution encouraging states to enact photo ID requirements for voting as Indiana has done. Memo to Newt: the large majority of voters would like to see a political party make a solid commitment to securing our borders instead of holding that goal hostage to amnesty legislation.

The failure of the Republican Party's leaders to speak honestly and convincingly to the issue of border security is one of the big reasons for the "catastrophic collapse" Gingrich is understandably worried about. Any menu of "real solutions" that does not include halting the flow of illegal aliens into the country is simply mirroring the head-in-the-sand conventional wisdom that got us into this mess in the first place. Voters will not reward conventional wisdom in 2008. Real solutions that can gain voter support require real honesty above all else. A dose of real courage won’t hurt either.