A Trillion Reasons Why U.S. Debt Is Incomprehensible

Tom Purcell
|
Posted: Jan 09, 2017 12:01 AM
Share   Tweet
The opinions expressed by columnists are their own and do not necessarily represent the views of Townhall.com. 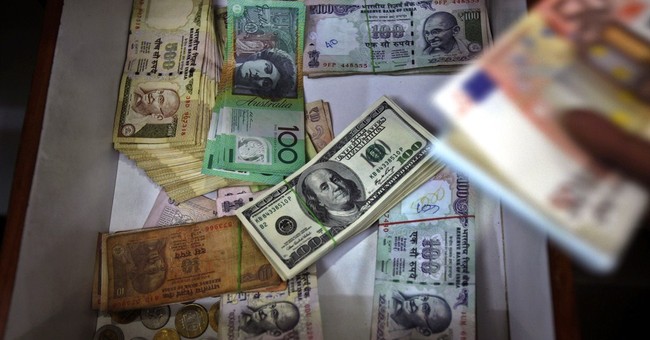 Get this: The U.S. Treasury says that America's debt grew by another trillion dollars in 2016.

If you're like me and you find it difficult to grasp how much a trillion really is, econ4u.com, an educational project of the nonprofit Employment Policies Institute, offers a mind-blowing illustration.

Heck, I remember the old days when a billion used to be a number so big nobody could comprehend it.

One billion hours is equal to more than 114,000 years - which would take us back to the Stone Age.

If you had $1 trillion in debt and paid it back at the rate of $10 million a day, it would take you 273 years - on an interest-free loan.

Our federal deficit has been averaging nearly $1 trillion a year since the collapse of 2008 - causing us to rack up around $8 trillion in new debt during President Obama's administration.

To cover our nearly $4 trillion annual budget, the U.S. Treasury spends about $1 billion every two hours - accumulating $1 billion in new debt about every eight hours.

Still not comprehending how much $1 trillion is? Then you'll like this description by Bill Bryson, one of my favorite authors, from his book "Notes from a Big Country."

Bryson asks his readers to guess how long it would take to initial and count 1 trillion $1 bills if you worked without stopping.

"If you initialed one dollar per second," writes Bryson, "you would make $1,000 every seventeen minutes.

After 12 days of nonstop effort you would acquire your first $1 million. Thus, it would take you 120 days to accumulate $10 million and 1,200 days - something over three years - to reach $100 million. After 31.7 years you would become a billionaire. But not until after 31,709.8 years would you count your trillionth dollar."

Regardless of what you think about President-elect Donald Trump and our new, Republican-controlled House and Senate, you'd better hope their policy changes unleash the pent-up economic vitality of our country.

You'd better hope we double Obama's 1.9-percent average growth rate so that we can generate the government receipts we need to pay our debts and meet our obligations.

If you still can't comprehend how big our debt us, consider this slightly modified illustration from econ4u.com:

If the U.S. government printed $1 million bills, "a whole bathtub's worth of them wouldn't equal a trillion dollars." And 20 bathtubs full of $1 million bills still wouldn't be enough to cover our national debt.