Tom Purcell
|
Posted: Mar 07, 2016 12:01 AM
Share   Tweet
The opinions expressed by columnists are their own and do not necessarily represent the views of Townhall.com. 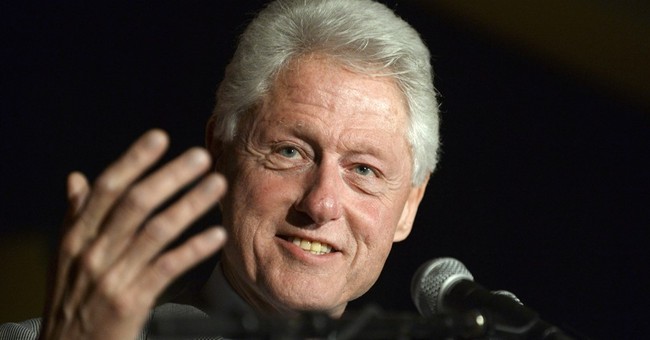 The way our circus of a presidential election is unfolding, the odds are increasing that Hillary Clinton may become our first female president - which would be great for American men.

I do care about what he or she stands for and how effectively he or she will address the considerable problems our country is facing (entitlement costs, debt, soaring health premiums, our record 10th year below 3 percent growth, the meltdown in the Middle East, etc.). But I'm in a growing minority, regrettably.

Once Hillary gets past Bernie Sanders, and she will, many will vote for her for historic reasons. They'll talk endlessly about the positive impact a lady president would have on the American psyche - how Hillary would be a powerful role model for their daughters.

But they're overlooking the profound impact a President Hillary would have on the American male - because her husband, Bill, would become our first first guy.

In all of American history, every president has been a male. Our identities as men were shaped by the courage and conviction of fellows like George Washington, alpha male Number 1, whose wits and grit won the Revolutionary War and who established a precedent for how all future presidents should conduct themselves.

We had to identify with men like President Lincoln, who overcame incredible discord to save our country from splintering - or fellows like FDR, who faced unimaginable economic turmoil head on and who led us to victory in World War II.

First Guy Bill Clinton would be a new role model, who could make our lot so much easier.

When he was president - holder of the most time-consuming job in the world - he found plenty of time to get into trouble. What kind of mischief might he get into as first guy?

He'll be responsible for hosting social and ceremonial events at the White House - which will include its first beer pong tournament?

Regardless what Bill does, he'll inspire millions of men to go boldly where few have had the guts to tread.

The old raconteur has got himself out of many scrapes through the skillful use of his silver tongue - encouraging men everywhere to fashion tall tales that both they and their wives can live with.

Despite his many peccadilloes - despite being caught in many wrongdoings - his wife never kicked him out, and his presidential approval ratings soared after he was impeached. His story encourages men the world over to act first and seek forgiveness later.

While his wife is weighed down by all of the woes of the world, Bill will be free to sleep in, play golf or sneak into his secret White House man cave for a little private time - inspiring millions more men to shirk any sense of responsibility.

I'd rather our candidates discuss our real problems, but since so little of that is happening - since Hillary may well be our next president - at least we'll have some clever bumper stickers to look forward to: "What happens in the White House stays in the White House."