Hey Bernie, the Robots Are Coming

Tom Purcell
|
Posted: Feb 22, 2016 3:57 PM
Share   Tweet
The opinions expressed by columnists are their own and do not necessarily represent the views of Townhall.com. 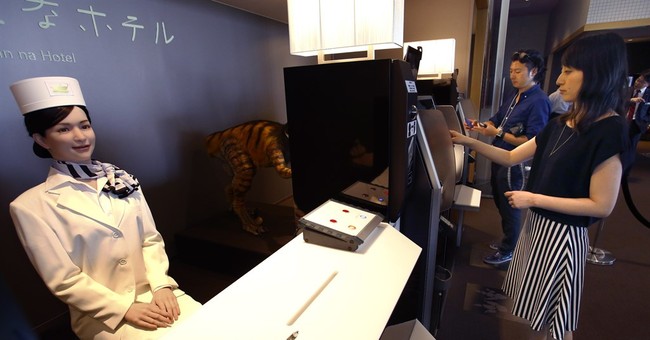 Reality has another notion.

Take the minimum wage. Bernie says he'll raise it to $15 an hour, more than doubling it. If I worked at a fast-food restaurant for minimum wage, Bernie would get my vote.

But the problem is, I'd likely never see $15 an hour as a fast-food employee because my entry-level job might be taken over by a robot.

According to the Brisbane Times, robots are expected to replace half of the world's jobs - burger flippers, truck drivers, bank tellers, telephone operators and many other low-skill professions - within the next 20 years.

In the fast-food business, labor costs account for 30 percent of the overall budget. If the minimum wage is doubled, labor costs would double - but there isn't enough profit margin in the typical operating structure of a low-margin fast-food restaurant to absorb the increased costs. That will incentivize these businesses to invest in automation technologies.

"The higher the minimum wage goes, the lower the threshold will go for robots to replace humans in many minimum-wage roles," reports The Week.

It's also why kiosks and table-based ordering systems are popping up at restaurants all over the country.

Which brings us back to Bernie Sanders.

His website says this, "Despite huge advancements in technology and productivity, millions of Americans are working longer hours for lower wages."

According to Bernie, it's because the wealthy have rigged the system to redistribute wealth from the middle class to the rich.

But doubling the minimum wage will, ironically, drive more advancements in the technology and productivity that will put the people Bernie is trying to help out of work.

In this regard, Bernie doesn't understand economics so well. But neither does President Obama.

A few years back, Obama criticized self-serve banking technology for eliminating jobs, but he was only half right about that. Though the technology does eliminate some bank teller positions, it creates much better jobs for software engineers and other people who design, build, install and maintain the high-tech banking machines.

Bernie and Obama don't seem to understand that huge advancements in technology and productivity mean there are fewer low-skill jobs that pay well, but there are many high-paying jobs in the science, technology, engineering and math (STEM) professions.

To get such jobs, though, one has to study, sacrifice, go to a trade school or college and work hard.

In fact, Bernie, if you want to champion an important issue, how about education reform - how about preparing all of our children, including those in many poor performing government schools, for the great jobs of the future?

Your website lists 13 actions you will take to reduce income and wealth inequality - lots of new taxes and government programs.

But you offer no specific plans to reform government-run schools at the elementary and high school levels, particularly in urban areas.

You talk about reforming government-mandated testing. You say you will reduce disparities in resources between wealthy and low-income schools, but you don't say how.

You are adamantly against school vouchers, which is one way for low-income families to send their kids to better schools - so they can get the skills they need to go on to trade schools or college.

I suppose it's a lot easier to wave a "$15 an hour minimum wage for all" magic wand than to bring real reform to our government-run schools.

But that can't stop the real challenge unskilled workers will face.

The robots are coming.