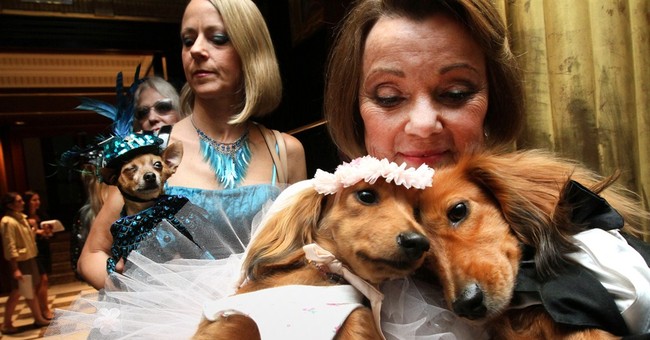 With Valentine's Day upon us, female readers are again pummeling me with questions on how to woo the modern male.

Dear Tom: I am as particular about the body washes, vitamin-enriched lotions and shower gels as any lady, but my boyfriend has taken such concerns to ridiculous levels. He has dozens of bottles in his shower and tells me he needs every one of them to achieve the optimum fragrance. I fear he cares more for his shower gels than he does me. - Shower Gels

Dear Shower Gels: It is true that your boyfriend's obsession with shower gels is a relatively new phenomenon. In prior generations, when men were much less self-absorbed in superficial things, men measured themselves not so much by how they smelled, but by how they lived and acted. But maybe your boyfriend's obsession with himself is partly related to his feelings for you. Maybe he only wants to achieve the optimum fragrance because that's what he thinks you want.

Dear Tom: I was never the jealous type, but I think my boyfriend likes the lady at my favorite clothing boutique more than he likes me. Every time we shop there, he talks to her excitedly about the latest fabrics, colors and designs - even though she does not sell men's clothing. Does he like her more than he likes me? - Jealous

Dear Jealous: I'm not sure what to make of your situation, but I dare say that I think your boyfriend really is more interested in clothing and fashion than he is in you or the lady at the boutique. In the modern era, many men have become as passionate about fashion as a typical Manhattan designer. Next time he gets into a discussion with the boutique lady, wave a taupe-colored silk scarf in front of him and its effect will surely lure him right out of the store.
CARTOONS | Steve Kelley
View Cartoon

Dear Tom: I appreciate that my boyfriend takes care of himself, in part because he wants to look good for me, but I wish he were a little bit more like my father's generation. When we went to a football tailgate recently, he refused to drink beer like the others - and whined the whole time that nobody brought a bottle of decent chardonnay. Also, his man bag - OK, it's a purse - is bigger than my purse and he doesn't even seem to be embarrassed about that. Am I being overly sensitive? - Overly Sensitive

Dear Overly Sensitive: If anyone is being overly sensitive, it is your boyfriend and millions of men from his generation. These sensitive New Age men are often so in touch with their own emotions and needs that they don't much notice anybody else's. If such a fellow drinks a beer, a rare thing, it will be an exotic brand from some remote part of the planet. He won't drink from a mug, either, but from a wine glass. At baby showers - yes, men are invited to those now - he'll get misty. If he ever becomes a father, he will clap the loudest the first time Junior uses the commode for "No. 2."

Dear Tom: I read on HistoryChannel.com that one of the theories about St. Valentine is that he was a priest who was killed for defying a Roman emperor. Do you know that story? - Curious

Dear Curious: Yes, Emperor Claudius II felt that single men made better soldiers than married men, so he outlawed marriage. St. Valentine put the love shared by young couples ahead of his own life and officiated their marriages anyway. He was imprisoned and then killed. Selflessness and sacrifice is what Valentine's Day is really about, or should be. Selflessness, rather than selfishness, is the key to romance. To selfless romantics everywhere, happy St. Valentine's Day!