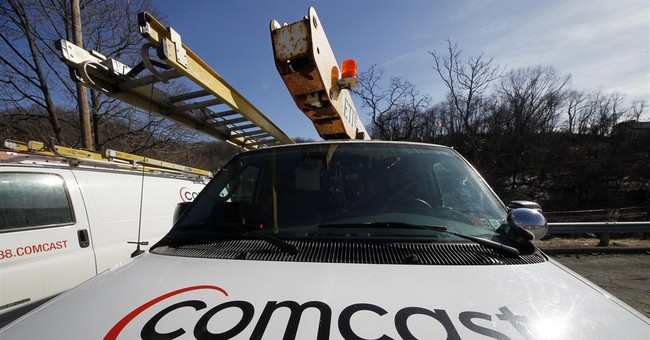 With the fate of the nation hanging in the balance, the time has come for grassroots conservatives to aggressively challenge the left-wing media establishment. For too long, progressive special interests have been manipulating the news to damage free market and liberty-minded candidates and elected officials. Further, they use mass media as a pedestal from which they attack the principles that conservative Americans cherish.

Possibly the worst offender is Comcast, the largest cable company in the country and owner of NBCUniversal – the parent company of NBC News and MSNBC. Comcast is a media empire, whose business model includes both media content and delivery. What this means is that you, the cable customer, don’t just watch shows, you’re also paying the salaries of liberal talking heads like Al Sharpton and Ed Schultz.

Sharpton, a progressive pundit who relies more on sensationalism and race-baiting than facts, uses his platform as the host of MSNBC’s Politics Nation to manipulate the news, divide our nation on race and advance his left-wing ideology.

Ed Schultz, who just recently won back a prime time position at 5:00 p.m. (EST), has promoted the outrageous claim that conservatives support segregation. He said, “There’s an undercurrent of anger out there, that there is this conservative separatist movement that is taking grip in America to separate. We’re not as equal as we think we are.”

To advance this theme, his program used a map of the U.S. covered with the image of the Confederate flag labeled, “Pride in Prejudice.”

Following up on that reckless statement, Schultz conducted an online poll asking: “Are conservatives the new Confederates?”

According to Mediaite, Schultz’s poll was a follow-up to a comment from Jesse Jackson that, “The Tea Party is the resurrection of the Confederacy; it’s the Fort Sumter tea party.”

Conservatives should not underestimate the damage that MSNBC is doing to the nation and civil political discourse. The extreme and irresponsible claims made by the network do affect public opinion, especially for low-information voters and individuals who have misconceptions about the Tea Party and conservatives in general.

Similarly, grassroots activists should not mistakenly believe that the falling ratings at MSNBC will force management to make changes in its programming.

Comcast CEO Brian Roberts is a billionaire and committed progressive as well as a friend of President Obama. Roberts served on the President’s Council on Jobs and Competiveness; he openly supported ObamaCare and recently held a cocktail reception for the Obama’s in Martha’s Vineyard.

Comcast can easily absorb the lost revenue potential at MSNBC for the greater progressive cause.

That’s why the best way to force change at Comcast is to leverage its Achilles’ heel and primary revenue source – its cable business. To affect meaningful change, grassroots activists must cease merely complaining about outrageous media bias. Instead, they should take bold action and use market forces against companies like Comcast that undermine conservative policy objectives and values.

While executives can easily dismiss letters critical of the media companies they run, they can’t ignore activism that puts a financial price on their irresponsible behavior.

With this goal of empowering activists in the fight against big corporate media, FreedomWorks launched the “Stop Comcast” campaign. At StopComcast.com, grassroots activists can send a letter to Comcast CEO Brian Roberts informing him that they are leaving Comcast because of the excessive leftist propaganda distributed by his media empire.

For years, members of the progressive left have leveraged their power as consumers to influence media companies opposing the progressive agenda. Now it’s our turn. The media must not be allowed to continue to undermine efforts to elect principled politicians and advance sound policy solutions by offering biased, dishonest coverage that warps public opinion.

At Comcast’s annual shareholders meeting this year, I warned Roberts that his radical media empire could backfire on his cable business. After all, why would a conservative customer want to pay Al Sharpton’s salary?

Hitting Comcast’s cable business is the best way to send a message to Roberts and the liberal media establishment that grassroots activists are not going to pay for media bias. Let’s vote with our wallets, and switch to cable providers that don’t conflict with our values of constitutionally- limited government and individual freedom.