Todd Starnes
|
Posted: Feb 09, 2018 9:11 AM
Share   Tweet
The opinions expressed by columnists are their own and do not necessarily represent the views of Townhall.com. 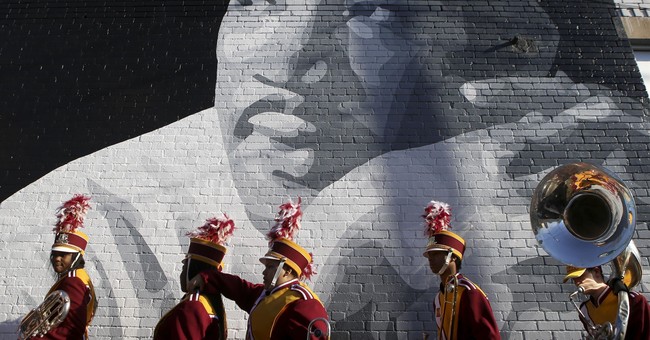 The good people of Hobbs, New Mexico are under siege from a Wisconsin-based group of atheists, agnostics and free-thinkers who are angry that gospel songs were performed during a Martin Luther King, Jr. Day program.

“It is laudable that the city is celebrating Dr. King and promoting unity within the community,” Freedom From Religion Foundation legal fellow Christopher Line wrote in a letter to city leaders. “However, including gospel music and religious messages in the celebration is inappropriate.”

The Freedom From Religion Foundation is a Wisconsin-based group of atheists, agnostics and free-thinkers that are on a mission to eradicate Christianity from the public square.

On Jan. 15 the city hosted an MLK Day march and program at Booker T. Washington Elementary School. The program was advertised as “an opportunity to display hope and faith.” Click here to watch the video.

FFRF said they were contacted by a “concerned resident” who discovered the celebration included “religious music performed by a gospel choir and numerous speakers that made reference to God and Jesus.”

The Freedom From Religion Foundation is apparently unaware that Dr. King was not just a Civil Rights leader – but he was also a renowned Baptist minister – a preacher of the Gospel.

It’s beyond ludicrous that anyone would take issue with religious overtones and gospel songs performed during a ceremony honoring a former Christian minister.

“This letter is a gross, intolerant display of anti-religious bigotry over the celebration of a man who dedicated his life to fighting injustice,” First Liberty Institute attorney Michael Berry told the Todd Starnes Radio Show.

First Liberty Institute, one of the nation’s most prominent religious liberty law firms, accused the atheists of being intolerant.

“No court has ever declared a ceremony observing Martin Luther King, Jr. Day unconstitutional because it featured a gospel choir and religious language similar to those of the civil rights leaders,” Berry said.

Based on the FFRF’s flawed argument, they would have also objected to Dr. King’s historic “I Have a Dream” speech delivered on the National Mall.