Common Sense is Gone With the Wind in Memphis

Todd Starnes
|
Posted: Aug 28, 2017 1:04 PM
Share   Tweet
The opinions expressed by columnists are their own and do not necessarily represent the views of Townhall.com. 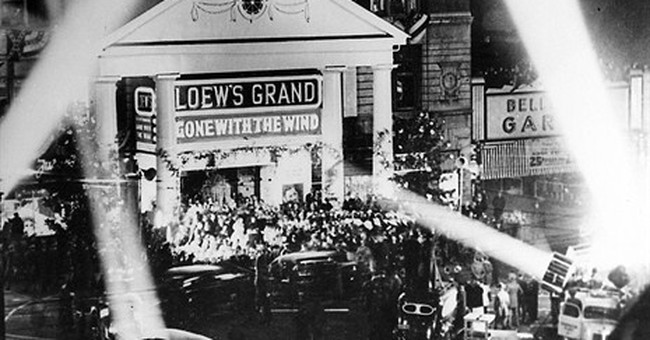 Common sense has gone with the wind in my hometown of Memphis, Tennessee.

The famed Orpheum Theatre has announced it will no longer show summertime screenings of "Gone With the Wind" -- ending a 34-year Mid-South tradition.

The Orepheum Theatre Group told me they made the decision to exclude the classic film from its 2018 summer movie series over "specific inquiries from patrons."

"As an organization whose stated mission is to 'entertain, educate and enlighten the communities it serves', the Orpheum cannot show a film that is insensitive to a large segment of its local population," the theatre company said in a statement to the Todd Starnes Show.

Television station WREG noted in its coverage that African-American population of Memphis is about 64 percent.

"While title selections for the series are typically made in the spring of each year, the Orpheum has made this determination early in response to specific inquiries from patrons," the statement read.

It's bad enough that Memphis leaders wanted to dig up the dead body of Confederate General Nathan Bedford Forrest from a local park, but now they want to ban Prissy and Scarlett and Rhett and Aunt Pittypat. This cultural cleansing of my hometown has gone too far.

Brett Batterson, the president of the Orpheum Theatre Group, told the Commercial Appeal the decision was made before the violence in Charlottesville, Virginia.

"This is about the Orpheum wanting to be inclusive and welcoming to all of Memphis," he told the newspaper.

Frankly, Mr. Batterson, I don't give a damn.

But since the Orpheum is all about inclusiveness - perhaps Mr. Batterson could explain why the theatre company is run by a white man? And why is it that an overwhelming number of board members are white? It smacks of white privilege if you ask me.

Sadly, I predicted several weeks ago that it would be only a matter of time before the culture jihadists targeted Tara.

And now our beloved film is gone with the wind -- done in by a bunch of meddling, no-account thespian carpetbaggers.

Many Memphians must be wondering what has come over this here town. To borrow a phrase from "Gone With the Wind," Liberals have come over it. Same as they've come over all of us.

But there's no use crying in our sweet tea, Southerners.

We must stand up to the scourge of the Yankee liberals. We must stand up and fight. In the words of Scarlett O'Hara, as God is my witness - we're not gonna let them lick us.