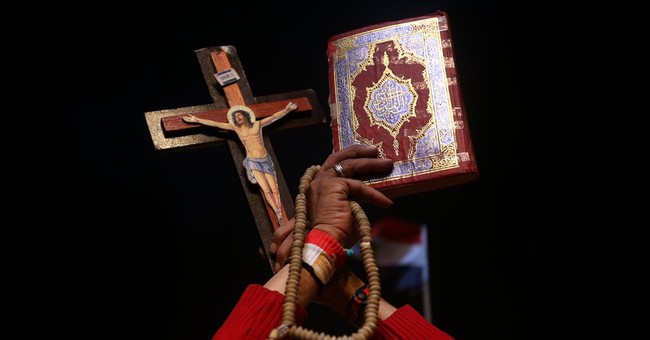 A world history book used in an Advanced Placement class is under review by a Florida school board over allegations it favors Islam at the expense of Christianity and Judaism.

“The book has a 36-page chapter on Islam but no chapters on Christianity or Judaism,” Workman said. “It’s remarkably one-sided.”

The textbook is being used in an Advanced Placement class in Brevard County schools. The book is on a state-approved list and has been used in the school system for the past three years without any complaints.

Workman said he received a copy of the book and he said it’s clear the authors “make a very obvious attempt not to insult Islam by reshaping history.”

“If you don’t see it from the eyes of a parent, kids are going to take this book as gospel and believe that Christians and Jews were murderous barbarians and thank God the Muslims came along and the world is great,” he said.

For example, Workman said a reference to Mohammed and his armies taking over Medina states, “people happily accepted Islam as their way of life.”

“It leaves out that tens of thousands of Jews and non-believers were massacred by Mohammed’s armies,” he said. “It’s a blatant deception.”

The book indicates that Jesus proclaimed himself to be the Messiah while stating as fact that Mohammed is a prophet, Workman said. Students are also given lessons on the Koran and the five pillars of Islam. The

“They don’t do that for Christianity,” he said. “That is offensive to me.”

“Some of the descriptions of the battles use the word ‘massacre’ when it’s a Christian battle and ‘takeover’ when it’s a Muslim battle,” she said. “In young minds, massacre paints a very different visual picture than a takeover or occupation – when in fact both battles were very bloody.”

“I don’t want revisionist history,” she said. “History is history.”

Pearson, the publisher of the textbook, confirmed there is a chapter titled, “Muslim Civilizations.”

“Pearson and its authors adhere to the highest editorial standards when creating course materials, which undergo a rigorous review process,” Pearson spokeswoman Susan Aspey told Fox News. “A review of the book shows there is balanced attention given to the beliefs of Islam, Judaism and Christianity.”

However, Workman said that statement is “patently unfair and untrue.”

“They hired a Muslim cleric to write the Muslim section,” he said. “The publisher told me.”

She said “academic experts did review the content, but they did not write it or edit it.”

We Know Why Police Didn't Breach the Classroom to Confront Texas Shooter...And They Admit It Was a Mistake
Townhall
WaPo BREAKING big story about maker of rifle used in Uvalde donating to Republicans *GASP* does NOT go well
Twitchy
Texas Department of Public Safety Provides Devastating Timeline of Uvalde School Massacre
Redstate
Why the Heck Did Amber Heard's Legal Team Call Her Back to the Stand?
PJ Media