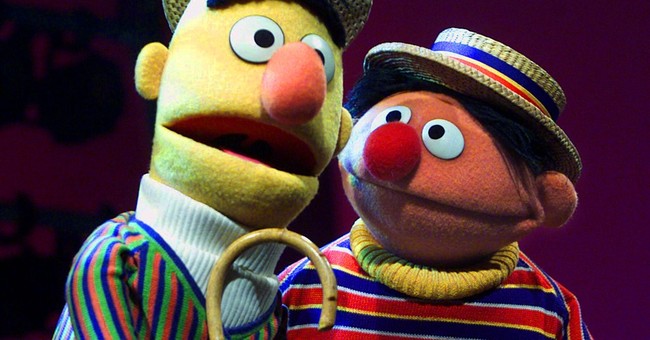 The New Yorker marked the Supreme Court ruling on the Defense of Marriage Act with a cover painting of two beloved Sesame Street characters getting unusually affectionate.

Next week’s cover is a painting of Bert and Ernie cuddling on a couch while watching the nine Supreme Court justices on television. The artwork is titled, “Moment of Joy.”

“It’s amazing to witness how attitudes on gay rights have evolved in my lifetime,” artist Jack Hunter, the artist told The New Yorker. The magazine said Hunter submitted the unsolicited artwork via Tumblr.

“This is great for our kids, a moment we can all celebrate,” he told the magazine.

In 2011 the Sesame Workshop addressed questions about the sexual orientation of Bert and Ernie in a Facebook posting.

“Bert and Ernie are best friends,” the statement read. “They were created to teach preschoolers that people can be good friends with those who are very different from themselves. Even though they are identified as male characters and possess many human traits and characteristics (as most Sesame Street Muppets™ do), they remain puppets, and do not have a sexual orientation.”

So that settles that.

I always thought the point of Sesame Street was to teach kids to get along — not to get it on.

And Lord only knows who Elmo is tickling.